Continuing with the critiques I started in 2015, here is the next in series – a book review.
Prologue: Go here
For reviews of other books in this series: Go here

Stars: 3.5 / 5
Recommendation: If you like paranormal plots with hint of romance, eroticism and the other world abilities involving immortals, then this is a series to go for.

Dark Carousel is the 30th book in The Carpathian Novels by paranormal author Christine Feehan published in March of 2016. The plot revolves around two lifemates - Tariq Asenguard & Charlotte Vintage. This books forms the third book in the sort of trilogy. The first two were the 28th book Dark Ghost, 29th book Dark Promises (Check my review here). 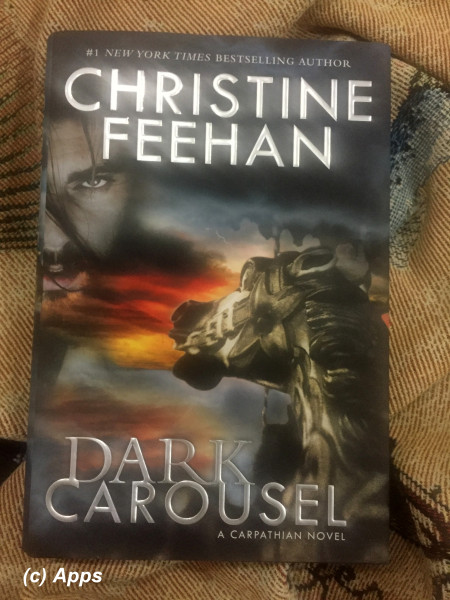 Christine Feehan's The Carpathian Novels introduces to the readers to a powerful and ancient race called the Carpathians - who are near-immortals living for thousands of years with powers and gifts including ability to shape-shift, etc. that no man can fathom - who live among humans without detection. Despite their gifts and extended lifespans, they are at the age of extinction. Their children are fewer and farther apart and those that are born and survive are all males - its been more than 500 years a female has been born until Savannah Dubrinsky (the daughter of the Carpathian Prince, Mikhail Dubrinsky). Without their female counterpart aka "lifemates" they male Carpathians lose the ability to feel emotions and to see in color, the only feeling remaining is the thrill they get after a kill. They feed on human blood, but they don’t kill their prey. With so few females left, males are forced to make a stark choice: either become vampire or "greet the dawn" (i.e. commit suicide). When Prince Mikhail Dubrinsky finds a lifemate in a human female with extensive psychic powers, the hope increases for all the Carpathian males so they don’t have to kill themselves or turn vampires. Because when they do find a lifemate, before they get "turned", the ability to see in color and their emotions are restored to them, and their souls are saved. The series ventures into other species or race, Jaguar and Lycan - extra-ordinary humans with abilities of jaguars and wolves  - as the stories proceed.

Charlotte "Charlie" Vintage and Genevieve "Vi" Marten came to California from Paris in search of some answers. Charlie is in the business of restoring old carousels makng it a lucrative job while Vi is independently wealthy. A few months ago they had gone to get tested for psychics at The Morrison Center in Paris and from then on they were being followed. Both have psychic abilities but they did the test for fun, not knowing that t would lead darkness into their life. Since the test they have lost everyone near and dear to them - Vi's grandmother and boyfriend, Charlie's brother and mentor - all murdered and bodies drained. Between them the only one alive was Charlie's brother's daughter Lourdes. Now being tired of being followed and to get some answers they come out of their hiding and reach the hip dance club The Palace hoping their stalkers would come out in open. Instead three men - Vince Tidwell, Daniel Forester and Bruce Van Hues - persist on pulling them on to dance floor or send them drinks.   But a chance touch brings to light all the bad things the three men had committed in cold-blood when Charlie touches Daniel's glass. Terrified, both Charlie and Vi leave the club, knowing that these three men had followed them from Paris, but wanting to follow them that night hoping for some answers.

Tariq Asenguard who owned The Palace - an ancient Carpathian - and his partner Maksim Volkov - lifemate to Blaze Mcguire (their story told in Dark Crime as part of the novella collection Edge of Darkness) - are scouting the area that is allotted to them to keep it free of vampires and their minions - both human and vampire alike. But in particular they are on lookout for Vadim Malinov - one of the ancient Carpathian of the Malinov brothers who carried the splinter from Xavier, the mage who wanted to eliminate the Carpathians - and Sergey Malinov - another of the Malinov brothers who had turned their soul to darkness - as Vadim is recruiting humans to make an army for himself. A whiff of Charlie's scent reaches Tariq and a single command from her mouth makes him realize that Charlie is his lifemate (all colors and senses restored immediately and his fear of going over to the dark side minimized) and in very much danger from not only the three men but also another vampire Fridrick Astor - friends with the Malinov Brothers and likely in cohorts with Vadim. Tariq, Charlie and Vi are lured into an ambush set up by Fridrick that consisted of - Fridrick's brother Georg, Dorin and Cornel Malinov - cousins to Mainov brothers - and four others who were human yet not - an experimental product conducted by Vadim. However Maksim, Mataias and his two brothers Lojos and Tomias (triplets), Dragomir Kozul, Afanasiv "Siv" Balan and Nicu Daka arrive in time to have a showdown with the Vampires and also protect Charlie and Vi. Seeing the scales tipping Fridrick turns his tail.

Knowing that there are two different groups behind them, that Fridrick was the cause for all the deaths in their family and not knowing what the three humans want from them, Charlie and Vi take up the offer from Tariq to stay in his mansion at least for the night. Fridrick had mentioned that Vi was for someone else and Charlie was for him. But Tariq worried that between Vadim, Sergey and Fridrick they would need three women and who was the third? A few weeks ago Tariq and Maksim had destroyed the underwolrd empire that Vadim and Sergey had created rescuing Emeline - Blaze'e friend - and accidentally coming upon another ancient who was thought to be lost - Val Zhestokly. Tariq also rescued a homeless couple - Donald and Mary Walton - and four children, a boy and three girls - Danny, Amelia, Liv and Bella - who also live in the smaller buildings inside his fenced area. Now Charlie, Vi, Charlie's niece Lourdes and their friend Grace Parducci who was nanny to Lourdes, all take shelter with Tariq.

What did the three men want from Charlie and Vi? Who was the man that they put a stake to his heart? Who is the third woman that Fridrick had lined up for - Emeline or Grace? What is Fridrick's plan? Where have Vadim and Sergey disappeared? Will Emeline be healed any time soon? How can anyone help Emeline? How much of Vadim's blood had she taken when she was in captive with Vadim? In all this chaotic confusion Charlie realizes that she has extreme carnal attraction towards Tariq despite the fact that there is confusion around as well as the lure of restoring old carousels he had. Will she understand the world of Carpathians and accept Tariq and his friends for what they are? The carousels that Tariq had for Charlie to restore had a history of its previous owners being dead of illness or murdered. What is the mystery behind it? How is it tied to Tariq and Charlie?

As always the primary plot with more than one sub-plot are woven together in this tapestry. This time around the plot had more meat about the story and less of the eroticism that made me like the series again. There have been mention of so many characters from the past books, and some events from the past it made me want to read the entire series again. I might just do that and get a month of review of books completed. ;) A good plot to read and enjoy the world of Carpathains.

1) If you remember from the previous book Dark Promises (Check my review here), Dragomir was one of the ancients who had isolated themselves in a monastery atop Carpathian Mountains and that collectively Gabrielle Sanders, Teagan Jones and Trixie Jones restore some semblance and faith of the hope to find their lifemates. Dragomir is sent to CA - in the region where Tariq had his region set - in the hopes of finding his lifemate.
2) Seven more ancients are introduced in that book as well - Dragomir, Sandu, Isai, Petru, Benedek, Andor and Ferro. Looking forward to see how their stories will pan out.
3) Also looking forward to see how the stories for these ancients pan out in Christine Feehan's future books - Mataias and his two brothers Lojos and Tomias (triplets), Afanasiv "Siv" Balan and Nicu Daka
4) In Dark Blood (the 26th book in the series), it is revealed that Xavier is part of triplet. Xavier, Xaviero and Xayvion are at the head of destroying the Carpathian, Jaguar, and Lycan races.  Each took one race and infiltrated himself into that race to destroy. And one of the splinter from Xavier - a piece of Xavier with all his power - lodges into Vadim.
5) Val Zhestokly - another ancient Carpathian - and Emeline surface in this book. Both were survivors of Vadim and Sergey's brutality. They first appeared in Dark Crime where they are rescued by Tariq and his friends including Maksim. Vadim also has another brother Addler who is yet to appear in any of the books.
6) Still looking forward to see a story about Gary Daratrazanoff.
7) The current Carpathian Prince Mikhail's father Vlad was the good one. However the author in this book talks about a different Prince at a different time - Prince Ruslan who had a child called Draven who was more twisted than anyone can imagine. I fail to remember how Xavier was connected to Mikhails father and any other Princes before. But Ruslan and Draven are new names for me so perhaps more will be seen of them in future books.
8) There is mention of Xavier's father Alycrome who perhaps knows more than Xavier has ever known his entire life as a mage.
9) It is revealed that Liv - the 10 year old girl - is the lifemate for Val Zhestokly. Although everyone is confused as to how Val to identify when Liv is still not grown to be a woman.
Tags: books, carpathian, critique by amateur, reviews
Subscribe