Stars:  4 / 5
Recommendation: A very beautiful movie depicting a revolution and how it turns the lives of people around toward the right path depicted through the eyes of leaders and soldiers of the 19th century.

August 15th is the day that India celebrates its Independence Day - their freedom from approx 400 years of British reign over the country. This year marked the 69th anniversary. Are we truly free? That is a question for another day as it would lead to a lot of discussion about injustice, crime and corruption that goes on till date with advancement on the side going at a pace slower than needed killing the good along. This is not the forum for that, yet! However to honor the great leaders - big and small, famed and nameless, soldier and king , everyone alike - who had fought to bring freedom to this great country that has history that goes centuries and eons to the beginning of time, I would be posting review of this revolutionary film.

Kranti ( = Revolution) is a 1981 Indian Hindi revolutionary film directed by Manoj Kumar. It starred Manoj Kumar, Hema Malini, Dilip Kumar, Shatrughan Sinha, Shashi Kapoor and Parveen Babi amongst other myriad of characters - some fame and some nameless just like our great leaders from the past. The film is set in 19th Century British India and shows the story of the fight for independence from British during the years 1825 and 1875. The story revolves around four men who lead the war against British Raaj ( = Rule) - Bharat (portrayed by Manoj Kumar), Sanga - a revolutionary (portrayed by Dilip Kumar), Shakti - a prince (portrayed by Shashi Kapoor) and Kareem Khan - a freedom fighter (portrayed by Shatrughan Sinha). 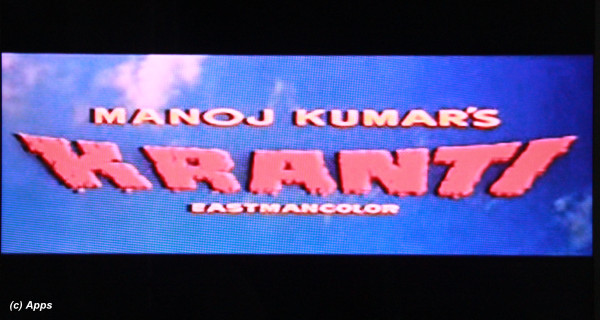 The plot is told in flashback by Sanga to a woman and a boy with a few minutes of to the current time in the plot with a fitted finale.

Raja Laxman Singh (portrayed by P. Jairaj) ruling the Kingdom of Ramgarh is forced to accept the handshake that his brother Shamsher Singh (portrayed by Pradeep Kumar). Shamsher Singh want to rule the kingdom but he cannot because of his brother still being the king. So he conspires with his brother-in-law Shambu Singh (portrayed by Prem Chopra) and Sir Thomas (portrayed by Veeru Devgan) - a British General - to have the Britishers allowed in for fair trade but with the hidden agenda of getting inside arms and ammunitions and taking out precious jewels instead. Sanga - the leader of the farmers - comes to know of the conspiracy and when confronting Shambu Singh and Sir Thomas, Sanga gets beaten. When he reaches to Raja Laxman Singh to make him aware of the atrocities, he finds him murdered and Shamsher Singh and Shambu Singh capture him on the charges of murder. He is sentenced to death. But Sanga escapes the jail but not before he chops off the hand of Shambu Singh - the very hand that had lifted against his son and wife.

In the meanwhile Sanga's wife Radha (portrayed by Nirupa Roy) gives birth to another male child. The whole family of Sanga and his close friends decide to leave the kingdom and go away. But they and many others are caught and Sir Thomas ruling the kingdom now on behalf of Raja Shamsher Singh order the old and children to be killed and young captured as slaves. In that chaos, Radha ensures that her second son is tied inside Sanga's blanket and drifted away in a wooden basket on water but she gets captured. The child reaches the shores of Queen Charumathi - sister to Raja Laxman Singh - who had just delivered a still baby. The mid-wife and Charumathi decide to adopt the child as their own hiding the fact that she never gave birth to a child and announce to the world that he is the crown Prince of their kingdom. Sanga's older child escapes the massacre with one of Sanga's farmer friend and grows up in their family as Bharat along-side. Not knowing that his family was alive, assuming dead, Sanga takes his remaining farmer friends and kills the Britishers and his troops. And forms a revolutionary group Kranti fighting his way inch by inch against Britishers and paving way for the path to future leaders towards freedom. Sanga comes to know that another factional group also apes their group name as well as the similar way they are also eradicating the Britishers. Sanga doesn’t have an idea who this group was. On the other side, Bharat has grown-up into a revolutionary himself and with his adopted family and the followers of his group he moves in the same direction as Sanga - albeit Sanga isn't aware of it. Bharat comes to know that another freedom fighter Kareem Khan is captured by Raja Shamsher Singh. He reaches the court in-time to save Kareem Khan. To get rid of Kranti (not knowing who that is), Raja Shamsher Singh appoints his sister's son Shakti as his Commander who oversees the King's armies. And Shakti's responsibility is to capture Kranti. Yuvraj Dheeraj Singh - Crown Prince of Ramgarh Kingdom - (portrayed by Dheeraj Kumar) is set to get engaged to Rajkumari Meenakshi (portrayed by Hema Malini) - daughter of the King Gangadhar of the neighboring Kingdom Shivpur.

All the players are in place now and the plot proceeds to show how they all meet, form together a coalition and work on inch by inch removing the Britishers, the traitors Shamsher Singh, Shambu Sing and their families from the Kingdoms of Ramgarh and Shivpur. A myriad of characters aid in this revolution - Surili (portrayed by Parveen Babhi) - daughter of one of the Farmer family who joined the revolution); Sheetal (portrayed by Sarika) - daughter of the Pujari who is part of the Bharat's revolutionary group) and many others.
The movie has some good music by Laxmikant-Pyarelal and Lyrics penned by Santosh Anand. Other than two songs pretty much every song is a hit namely "Zindagi Ki Toote Na Ladi", "Ab Ke Baras", "Chana Zor Garam", and the title song "Kranti Kranti". The song "Durga Hai Meri Maa" plays all through the movie as a background score. Since the movie had so many characters, the singers were also a collection of the famous ones namely Mahendra Kapoor, Mohd. Rafi, Kishore Kumar, Nitin Mukesh, Shailendra Singh, Lata Mangeshkar, Manna Dey and Minoo Purushottam. Here are the videos of the famous songs:

My favorite freedom fighter has (is still) always been Bhagat Singh - a short time of his life but entirely dedicated to the country and its people till his last breath. However this time I wanted to pick a different leader, different setting and a totally different theme. Thus review of Kranti happened.

The movie is well-made tying up all pieces together although a few gaps are there. Also there are definite editing issues - perhaps on youtube but for sure there are. A revolution that I believe we need even today if not getting freed from someone else's rule but to get freed from all the atrocities and crimes. Karnti always lives only soldiers are needed. What better movie than this to pay homage to all those leaders.
Spoiler Alerts:

1) This film marked the return of Dilip Kumar on to the silver screen after a five-year hiatus he had taken.
2) I remember that the older films until perhaps the early 2000s the title of the film was displayed in Hindi, English and Urdu languages - the three predominant in India. Just like how this movie shows below. However, lately I only see the film title displayed only in Hindi and English. What happened to Urdu? How could we have forgotten one of the oldest language? I wonder. 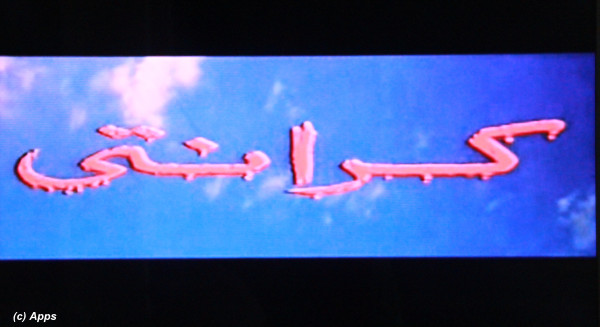 3) Kunal Gowswami- Manoj Kumar's Son - is introduced in this film. 4) The popular name Manoj Kumar chose for his character was usually Bharat - his movies tended towards patriotism and Bharat is an alternate name to India.
5) The opening credits have few seconds of the initial tune of the hit song "Mere Desh Ki Dharti" hit song from the 1967 hit Indian Hindi patriotic film Upkar ( = Favor / Kindness). Here is the famous song:

6) Veeru Devgan, father of the famous Indian Hindi actor Ajay Devgan and also a stunt and action choreographer portrayed the role of Sir Thomas - the British General who was involved with taking over the Kingdom of Ramgarh. 7) The scene where Dilip Kumar chops off the hand of Prem Chopra reminds me so close to the scene in the 1975 hit Indian Hindi film Sholay ( = Burning Embers / Coals) where Gabbar Singh (portrayed by Ammjad Khan) - the villain - chops off the hands of Thakur Baldec Singh (portrayed by Sanjeev Kumar). While in this movie Kranti the good guy was chopping the hand of bad guy, but in Sholay the bad guy was doing it. Here is the pic of the scene from Kranti and the actual scene from Sholay. 8) Check the way the revolutionaries used the British cannons against them. Irony that I see it happening now too everywhere.