Stars:  4.5 / 5
Recommendation: Amazing movie to watch the life of someone who lived, breathed, ate and played baseball. 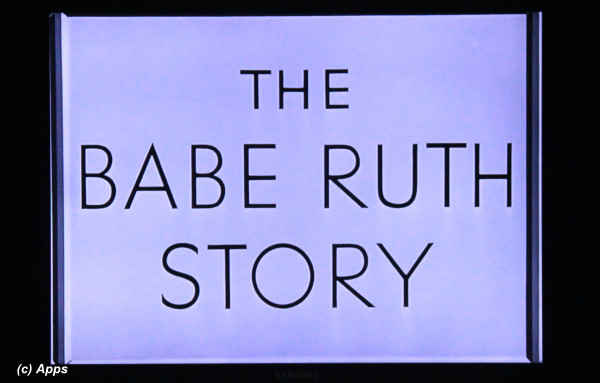 One of the few wishes that my oldest nephew Srithan had when he came to visit me this year in August along with my parents was that he wanted to see a Yankees game. Reason being his baseball team was named Yankees. I had not watched a baseball game on TV either so wasn’t sure if I would enjoy it much. However for the sake of my nephew I took him to the baseball game along with my parents and my dear friend Sunita on this particular day. The game was between Tampa Bay Rays and New York Yankees. And surprisingly enough I enjoyed it very much and with so many cheers from my nephew it was much more enjoyable. And we got to see 7 Home Runs during the game and to my nephew's delight Yankees won. Woo! Hoo! Win-Win in every way. And made some great memories. 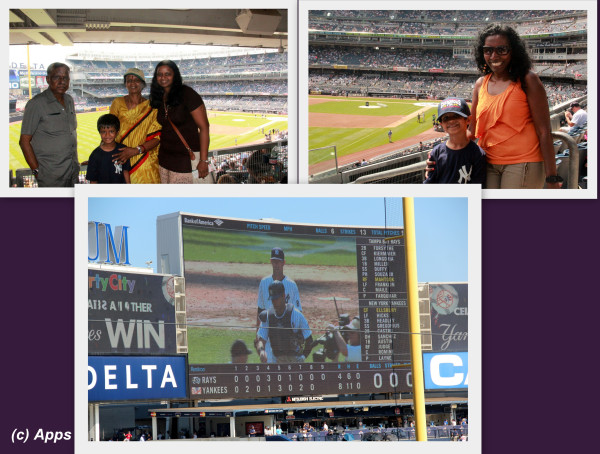 So, to honor this day I wanted to post a movie about Yankees and thus the movie The Babe Ruth Story - what better movie for it than this. Hey! :)

The movie begins in 1906 (after a brief tour of the Yankee Stadium) in Baltimore Waterfront where 11-year old George Herman Ruth Jr. is trying to play ball and at the same time do his duties at the saloon his father runs. 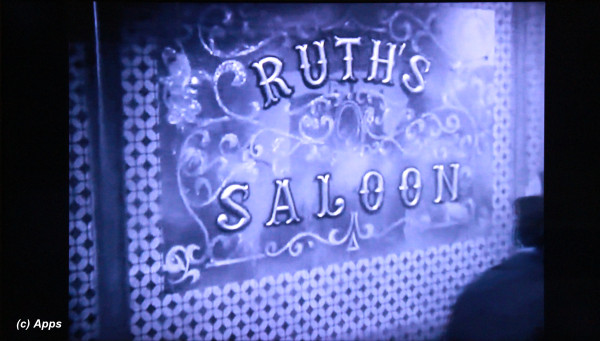 Brother Matthias from St. Mary's takes George away from his abusive father to St. Mary's. At the age of 18, he gets hired by Jack Dunne - manager to Baltimore baseball team - to play for Baltimore Orioles and his new nickname "Babe" - he was called Big George while at St. Mary's because of his large size - for $600 per season. After a winning streak he gets sold to Boston Red Sox, but the very first game against New York Yankees turns out bad and he is asked out sit out the game and also charged for causing bad game. He is confused at why suddenly his streak changed when he was doing the same thing. One evening at an after game happy hour Claire Hodgson points out that whenever he pitches a curve he sticks out his tongue giving away his secret which is what the Yankees found out and used against him. Once again his winning streak continues and his contract increases to $100,000 a season eventually.

He finds Claire again and tries to court her bur Claire rejects him. But his career extends from being a pitcher to a batter hitting a home run that is the longest run anyone ever saw - nearly 600 ft. His casual "Hiya Kid" makes a crippled boy to stand on his feet while he follows to see Babe walking by. The rest of the film follows the life of Babe Ruth into becoming a successfull baseball player both as a pitcher and a batter first with Boston Red Sox and later with New York Yankees and eventually becomes a legend in Baseball - showcasing all his us and downs that he stumbles across the path.

We missed visiting the Yankee Stadium tour. Am glad this movie showed a few glimpses from the tour. Here is the Babe Ruth's plaque that I took a pic of from the picture. 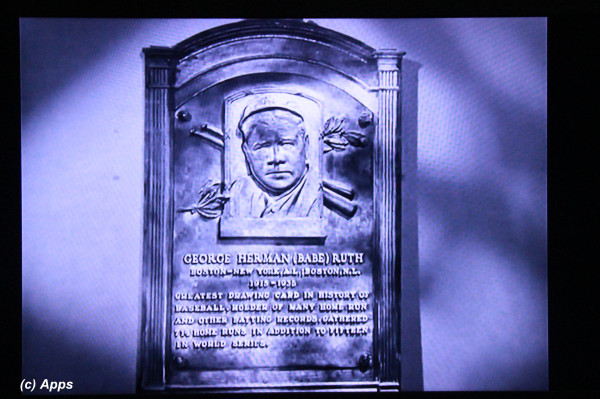 The movie perhaps misses many aspects of Babe Ruth's life. However, it was a very well-made movie about the legend showing all of his ups and most of his downs, a person who lived, breathed, ate and played baseball. It left me in tears at many places. I would love to watch this again with my nephew someday. Till date I have not been a fan of any baseball team although I have followed Cubs games a bit because I used to live in Chicago. However this movie and my experience watching Yankees play is making me to lean towards supporting Yankees.

1) The scene where Babe Ruth dictates to Phil Conrad his love letter to Claire reminds me of the song from the 1991 Indian film Tamil / Telugu Guna again. The lead actor Kamal Hassan dictates the love letter to Roshini - the lead actress - he want to write himself for her.