Stars:  3 / 5
Recommendation: With the theme of realms and kingdoms, adding the element of sorcery and finishing it off with magic and devotion, the movie has all elements to reach out to one and all.

Varalakshmi Vratam is the 1961 Indian Telugu Film based on the popular Indian Festival of the same name. The movie was directed by B. Vittalacharya with Kanta Rao and Krishna Kumari as lead actors. The festival is to win the favor of Goddess Lakshmi, Vishnu's consort who is one of the Hindu Trinity (Brahma, Vishnu and Maheshwara). She grants boons to whoever offers pooja to her. This pooja is performed by women in the states of Andhra Pradesh, Telangana, Karnataka and Tamil Nadu states in India. It is usually celebrated on the second Friday in the month of Sravana - usually July or August per Gregorian Calendar. It is believed that worshipping Goddess Varalakshmi on one day is equivalent to worshipping the Ashtalakshmi - the eight Goddessess of Lakshmi. More about the festival here.

This year my parents were with me and we performed the pooja at home. Normally it is done by married women, but it is not wrong for unmarried women to do too. I have been doing it since past two years, so this third year I was really happy to have my mom and dad with me. 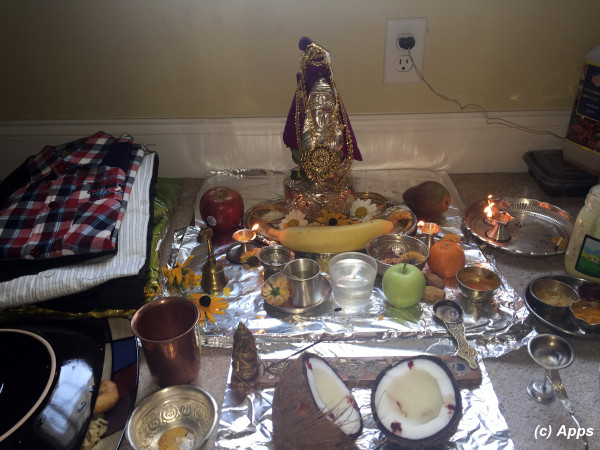 Now back to the movie review that depicts this festival.

The plot begins with a scene where a King's First Wife - the legal Queen - is on the verge of giving birth of the King's heir. The King's Second Wife already has given him a son but the son of his first wife's kid itself can be the heir to the throne per the rules. So the Second Wife puts her Brother Mitramasena (portrayed by Satyanarayana) at task to kill the Queen and her newborn son. Mitramasena takes assist of a Sorcerer(portrayed by Rajanala) to get her away from the palace with the aid of black magic and forces her to get herself fall into the well. However, the Queen escapes at the last minute with the help of the King and his associates. And the Sorcerer along with his goon are captured. The Queen gives birth to a son. The King sends his Prime Minister to give the news to his second wife. However the Prime Minister over hears the Second Wife and Mitramasena plotting against the King's new born and likely heir to be killed. When told to the King, he doesn’t listen to the Prime Minister - so blindly in love and trusting his Second Wife. The Prime Minster then exchanges the heir with the new born (one of the twins) of one of the courtier Kotayya's - the courtier's wife gives birth to twins the very night - in order to save the heir. The heir grows up as the courtier's son - one of the twin. Mitramasena kills the twin thinking him to be the heir. The King and Queen come to know the next day and King realizes that the Prime Minister was right. However before he could take an action against the Second Wife and her Brother Mitramasena, Mitramasena kills the King, captures the Queen and stabs the Prime Minister. The Prime Minister dies in the front yard of Kotayya's home taking a promise from him that he will raise the heir as an able person so one day he can become king. In the meanwhile Mitramasena also captures his sister - the Second Wife - and puts her in jail. Mitramasena becomes the King and rules the kingdom as he wants making the Second Wife's son - Anandapaala - a puppet in his hands, albeit he is still the Crown Prince. Mitramasena and his Wife have a daughter - Mani Manajri - who grows up as a tom boy. And the heir who is growing as a twin of Kotayya grows up to be an excellent marksmanship and soldier named Udaya Simha (portrayed by Kanta Rao).

On one of the jungle riding expedition of Manjari with her two friends, is chased by a Lion and Udaya Simha along with his brother Avataram saves her. But Anandapaala finding Manjari unconscious accuses Udaya Simha of foul resulting in a swordfight between the two. Manjari awakes up and clarifies although Anandapaala is miffed. Manjari asks Udaya Simha to come to the court next day so he can be rewarded appropriately - making him the lead of 1000 horse riding army. The story thus continues with all kinds of twists and turns - will Udaya simha realize he is the heir? What will happen when that comes out? The crimes done by The Brother and the Second Wife come out? Will Manjari and Udaya Simha realize the circumstances that lead to where they are, forgive and become one? How will the Goddess Varalakshmi help them? Where does all this story lead to? Aparalle story between Avataram and his fiance Vayyari goes in parallel who face down the two side-kicks of the Sorcerer.

Interesting that many characters have no actual names other than Raju ( = King), Pattapurani ( = Primary Queen), Tammudu ( = Brother), etc. Only few characters have actual names. Perhaps the editing of the youtube video was not good or the movie itself had editing problems, but there are quite a lot of scenes missing but are spoke about later in the movies that makes me wonder.

A myriad of actors with more than one sub-plot the plot has so many twists that I can't even imagine in one film leaving one confused at times. It took most of the film to get to the theme of Varalakshmi Vratam and the importance of that vratam. The movie also ends abruptly with everyone realizing their follies and overnight accepting their mistakes. For the time period it was made, it definitely would have gathered crowds with the theatrical and cinematographic effects and adding to that the human sentiments. However barring the editing mishaps the movie has been well-made. And enjoyable watching on a lazy day on TV.

1) Satyanarayana and Nirmaladevi aka Nirmala portray the roles of Mitramasena and his Wife in the movie even though they are not much older than the lead actress. Nirmala has been the eternal mother and grandmother in Telugu movies ever since. 2) With no argument one can say that Rajanala has been the and now the best villain, who can morph into any character any number of times and live it. We forget its Rajanala and only remember the character. A few samples from this movie, check it out yourself - First as the sorcerer, next as the old man who traps Anandapaala. 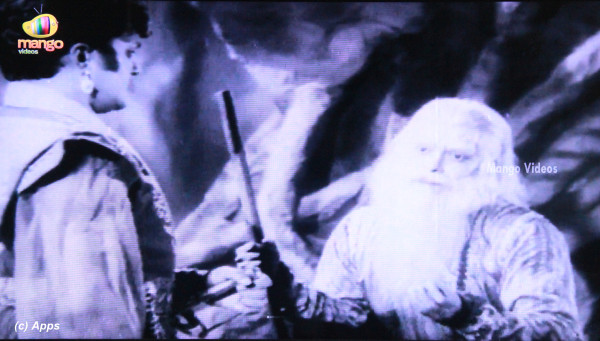