Stars:  5 / 5
Recommendation: With elements of reincarnations, ghost and mystery the movie is a classic that is not to be missed.

Mahal ( = The Mansion) is a 1949 Indian Hindi film starring Ashok Kumar and Madhubala. This the first film based on reincarnation and horror - thriller plot. This directorial-debut film by Kamal Amrohi formed a platform for both Madhubala - leading lady - and Lata Mangeshkar - female playback singer for her iconic song Aayega Aayega Aanewala - to be shot into instant stardom. The film also set stage for gothic genre in Indian film going on to become one of the biggest blockbuster hit in 1949. 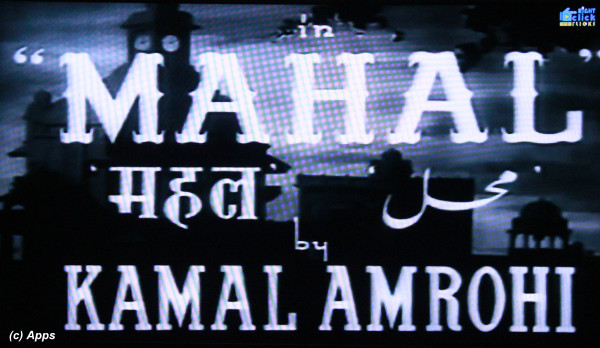 This particular day that I am posting this movie for, I was listening to a program on the music director Khemchand Prakash who sadly had passed away two months after this hit film was released. That gave me an inspiration to post about his last film and the iconic song.

The plot as mentioned is about reincarnation and a ghost. It begins with Hari Shankar (portrayed by Ashok Kumar) buys a beautiful but abandoned building titled "Sangam Bhavan" in Allahabad and comes to live in it. The caretaker tells him about an incomplete love between the previous owners of the home - some 40 years ago. No one has since occupied the palace. The story goes that 40 years ago the palace was built by a man for his lover Kamini (portrayed by Madhubala). The man always came to Kamini during the night and left at the crack of dawn. But one day his ship sank and he drowned and he vows to Kamini that their love never fails. A few days later Kamini dies. No one knows who these folks were and what were their names.

The night that Hari Shankar moves into the palace he comes across a portrait of a man hung on the wall, and he is stunned to see that it has an uncanny resemblance to him. 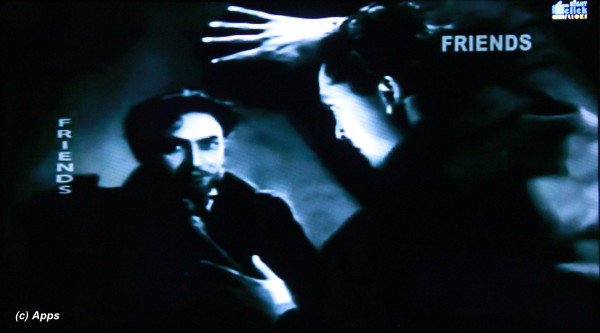 Later that night he hears a girl singing and then sees her in one of the bedrooms. But when he goes into the room, she disappears. Shankar's friend Shrinath (portrayed by Kanu Roy) comes to meet him at the same time. Unnerved by what all has been happening since his arrival, Shankar tells the tale to Shrinath and listening to which Shrinath thinks that it is a scam an expresses suspicion on everything. However the girl reappears and when the men follow, she jumps from the terrace and disappears. Who is this ghost? Why is there a picture of his is in the palace? Is he really the one 40 years ago who built that palace? With some force from his friend, Shankar heads back to Kanpur But the palace keeps drawing him back he jumps the train mid-way at Naini and travels back to Allahabad to the palace. Enraged by his return the next time they see the girl, Shrinath tries to shoot her but she disappears again. Why is Shankar being drawn so much towards this ghost? Who is she? Will Shrinath get Shankar out of this ghost mess? How will the story unravel? Trying to know answers to all these questions grips us to our seats and thoroughly entertain one.

The iconic song comes at the very beginning of the movie giving the viewers no more wait for it. It is said that the opening lines of the song were written by Kamal Amrohi and the rest of the song was completed by Naqshab - the Lyricist. This song has become immortal and voted as the best song of the millennium. However it is very sad to note that Khemchand's wife had let the last years of her life in poverty (which had been the case with many artists of the yesteryears who weren't smart enough to create a nice nest egg for themselves like the later generation has been doing till date.) Someone has taken a lot of pains to gather all the details about the song and the history behind it here. An excellent read and gives a lot of insight into that beautiful song.

The role of Kamini was written with keeping in mind the then reigning star Suraiya. But instead Madhubala, a newbie in the film world, was chosen. Perhaps that is why her costumes and the way she looks at certain angles all resemble Suraiya. The play of light and shadow creating the gothic effects and the element of ghost in them. The cinematography is German-born Josef Wirsching gets you drunk on the gorgeous and equally frightening shots, each and every one unique in its own self. The screenplay by Kamal Amrohi is excellent. Some of the dialogues are really really good. The element of the gong of the grandfather clock only adds more chills. Madhubala gave a performance that even today if released today would become immortal once again - two roles both in contrast to each other.

Is it reincarnation? Is it ghost? Or is it plain old feeling of love in human heart that is twisted in more than one way and an innocent gets sacrificed. As much as I loved the plot, it irked me at the portrayal of one particular character. Can one go to such an extent to get someone? To an extent that goes beyond the lines of moral code? Even when the façade need to be uncovered and truth be told, the ghost keeps the plot going to attain its selfish heart's desire. Can one be so cruel in the name of love? In the name of heart? That was the biggest question I was left with at the end. Another element that adds chills up your spine. Of course this doesn’t mean that I don’t consider this an iconic movie, I do very much. Yet, that little nag I am left with too.

A movie that stands as a classic for many reasons that if you have not watched it I would say a must to watch on any day. Well-made and thoroughly enjoyable one even though it gives shivers at times.
Spoiler Alerts:

1) Prior to this film the soundtracks were listed by the name of the characters on whom the songs were pictured, perhaps to be in sync with the way the theater was then - characters actually sang their own songs. Playback singers were given little to no name or fame when they were used. This movie shot not only Lata Mangeshkar to fame but also paved a path for all future playback singers.
2) Several movies have been said to have been inspired from this film:
a. 1958 hit reincarnation thriller Madhumati directed by Bimal roy
b. 1975 American film The Reincarnation of Peter Proud
c. 1980 hit reincarnation thriller Karz
d. Karz in itself was remade several times in various Indian langauages: as the Kannada film Yuga Purusha (1989), the Tamil film Enakkul Oruvan (1984), and Om Shanti Om (2007)

Quite a few movies getting added to my list to watch. :)

3) The iconic song mentioned above has become so famous that it is so easy to forget that there are other melodies that are equally melodious. For instance this classical mujhra Chun Chun Gunguruva Baje Jhumba Sung by Rajkumari and Zohrabai Ambalawali or the sad melody Mushkil Hai Bahot Mushkil Sung by Lata Mangeshkar or the pathos melody Ghabrakar Ke Jo Hum Sir Ko Takraayan Sung by Rajkumari or this one about heartbreaking and unfaithfulness Dil Ne Fir Yaad Kiya Sung by Lata Mangeshkar or this beautiful melody filled with feeling fo despair Main Wo Hansi Hun Lab Pe Jo Aane Se Rah Gayi Sung by Rajkumari or the melody that reveals all the plot Ek Teer Chala Dil Pe Laga Sung by Rajkumar. For all the songs from this film, check this video below:

4) Notice the spelling of the city Kanpur in here. Earlier it was spelt as Cawnpore - perhaps a left-over British lingo. 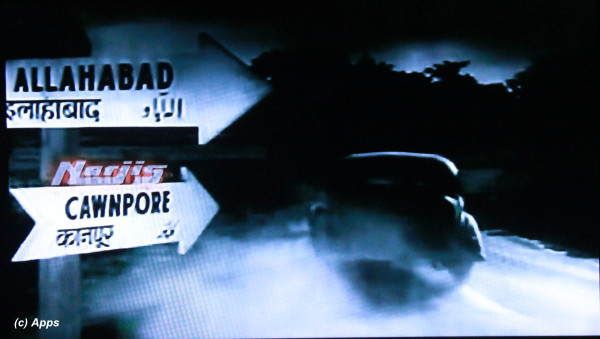 5) Part-way through the movie, we get to see hidden tunnels and traps that answer many a questions that raise in our minds.
6) There is a classical with folk fusion dance in the movie that has no bearing whatsoever in the movie, but it has been still added. Wonder for what purpose. To show the dancer's ability to dance or to create further fear in the movie. Although it didn’t serve the purpose to add fear in the plot, but it made Shankar's wife afraid of Shankar.
7) The movie has only songs sung by Female playback singers. However there is one scene where there are a few lines sung by a Male playback singer and I could not follow who that was.
Tags: critique by amateur, movies, reviews
Subscribe