Night Shift is a collection of four novellas by four authors who have mastered the art of spinning stories in urban fantasy and paranormal romance - Nalini Singh, Ilona Andrews, Milla Vane and Lisa Shearin - published in November of 2014. Here is the review of the third novella.

Lucky Charms is the third novella in the book written by Lisa Shearin and is the SPI Files #1 in the same series. The plot revolves around Makenna Frazier - working for Supernatural Protection and Investigations aka SPI - and her partner Ian Byrne - highly accomplished agent at the SPI. It is set in a world where humans and mythical creatures - ogres, leprechauns, elves, vampires, etc. - co-exist. 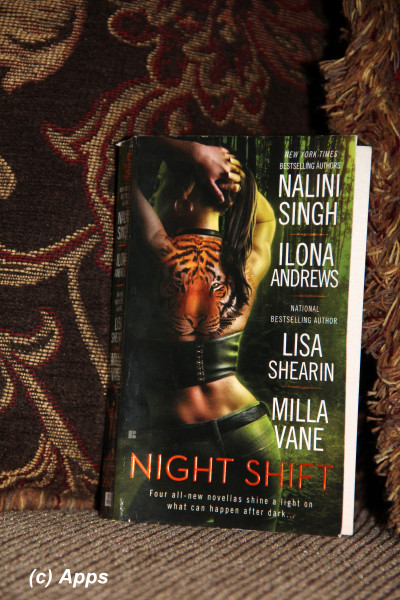 On her first night working for New York SPI office, Makenna Frazier - a seer - was assigned to Ian Byrne. And her first assignment was to locate five horny leprechauns who had vanished from a strip-club. Ian Byrne was not happy of the task and of having Makenna as a partner either. A bachelor party for the soon-to-be married Leprechaun Prince of the Seelie Court constituted the five who disappeared. The most important reason to bring back these Leprechauns because if the Prince is caught he has no choice but to grant three wishes for his release which might alter the world of power and dominance. Added to that they carry bags of money tied to their belts that reaches directly to their personal pot of gold.

The hunt for the lost Leprechauns continue while Makenna bonds with the team and gets closer to Ian than needed. Will they find the Leprechauns? Will they both have something more? Where will this all lead to? A simple and mundane task it seemed for Ian and Makenna but it doesn’t seem as so. How does this pan out is an interesting read.

This plot is also written in first-person context. There are shades of humor, sensuality, rage, cunningness and a dash of danger lurking along. I thoroughly enjoyed the novella. And given time in future I will perhaps pick the series from the beginning to read, especially since the ending hung in a cliffhanger.

An easy read and a definite pick that you can finish in a few hours.

1) Grammatical Errors: On Pg. 250, fourth para from the bottom, "to" should be replaced with "do" in the line "The file we have on you…"
Tags: books, critique by amateur, reviews
Subscribe