Continuing with the critiques I started in 2015, here is the next in series – a book review.
Prologue: Go here
For reviews of all the book in this series: Go here.

Phantom Evil is the first book in the first book in the Krewe of Hunters series by Heather Graham and published in 2011. I read her first book titled The Silenced - 15th book in this series - and had posted about it here. I was intrigued by the series and now I have started at the beginning of the series like how I do always. :) In this book the plot revolves around Jackson Crow - the leader of the first Krewe Unit - and Angela Hawkins - a police officer who investigates using her paranormal intiuition. 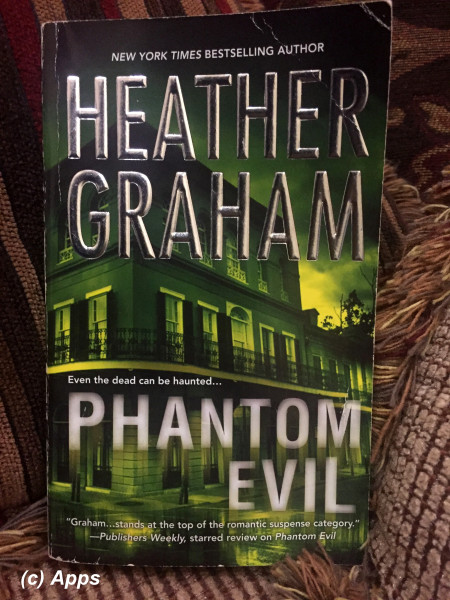 Krewe are a secret FBI unit, the members of which know a little of the otherworldly. Each member of the unit has honed a particular psychic talent of their own making them the paranormal investigating team. This unit was created to deal with murders with supernatural undertones and paranormal activities. Headed by paranormal investigator Adam Harrison, the elite unit of paranormal investigators is called on to solve cases linked to historical mystery involving legendary crime and serial killings, war events and hauntings. The Krewe draw on their various abilities such as telepathy, mind reading, communication with the dead and supernatural intuition to solve unexplainable crimes. The stories in the book series are located mostly in Virginia and New Orleans, with some well-known legends used as themes.  The Krewe are divided in three distinct groups. The first group is led by Jackson Crow, the second group is led by Texas Ranger Logan Raintree and the third group is a unit of its own.

Adam Harrison brings on board Jackson Crowe and offers him a team to investigate the supposedly suicide of Regina Holloway in New Orleans. Regina Holloway and her husband  Senator David Holloway have been living in the house on Dauphine Street which was owned at one point of time by Madden C. Newton - a serial killer who had tortured and killed people in that house right after the Civil War. Everyone believed it was haunted and so did Regina. But David didn’t although they were getting over the pain of losing their child Jacob. One evening Regina falls from the balcony of their house and dies leading to speculations that she might have committed suicide or the ghosts must have killed. Adam Harrison is given the case to investigate and he assigns Jackson Crowe and his new team to it.

Jackson's team consists of Angela Hawkins - coming from a Virginia police force - Whitney Tremont - with a Creole background and doing camera work in a local TV show - Jake Mallory - a musician but frequently called in for kidnapping and disappearing cases - Jenna Duffy - a registered nurse from Ireland - and finally Will Chan - a theater artist and a magician. All of them had unique talents that are considered supernatural, and so does Jackson although he doesn’t acknowledge it well. He is reluctant to head a team when six months ago he had lost most of his team to a serial killer called Pick-Man. Although no one blamed him, he did so himself. Now fighting his demons he has to lead a team and solve this case all the while delving into the world of supernatural powers. Will he overcome his demons? Will he find the answers he is looking for?

Who killed Regina Hollloway? Are there really ghosts in that house? What are the secrets behind the walls? How is it all connected to the people around Senator? Team being new, bond themselves fast and work together at solving all these questions. And Angela and Jackson find themselves too, wanting to be more than just team leads.

A riveting thriller with elements from otherworld weaved in well by Heather Graham. This series is now on my list to complete it soon. Absolutely loved the concept, the characters, and the plotting. Only thing bothered me was the usage of the ghosts at the ending scene, a little too much to accept for me. One may not always like this paranormal kind of themes if one doesn’t believe that there are all sorts of beings in this world and all kinds of abilities people would have. If you accept that, then this is one series you would love it.

1) Huey Long, the long-ago Louisiana politician and 40th Governor who worked for the people welfare and benefits until he was assassinated in 1935. The plot mentions him and I was wondering if he was a recent politician. Guess people still remember him even now. Must have been some politician that marked himself with his good deeds. (More about him here).
2) There is mention of Archie Bunker from All In The Family series - I have watched a few episodes and I have to say it was indeed a satirical comedy on changing times.
3) I didn’t know that there is a church dedicated to worshipping of aliens. Well, freedom to religion for everyone I suppose.
4) There is reference to Adam Harrison - who supervises the paranormal investigations for FBI - and how he came upon with these teams. Makes me want to read the Harrison Investigation Series by Heather Graham that definitely are prequels to this series.
Tags: books, critique by amateur, krewe of hunters, reviews
Subscribe