The Melody Lingers On is a thriller by Mary Higgins Clark published in June of 2015. The plot follows three different people - Elaine "Lane" Marsha Harmon (a widow and an assistant interior decorator), Parker Bennett (The hedge fund owner who had disappeared or died with all of the investors' money) and Eric Bennett (Son of Parker Bennett who is under constant surveillance by FBI). 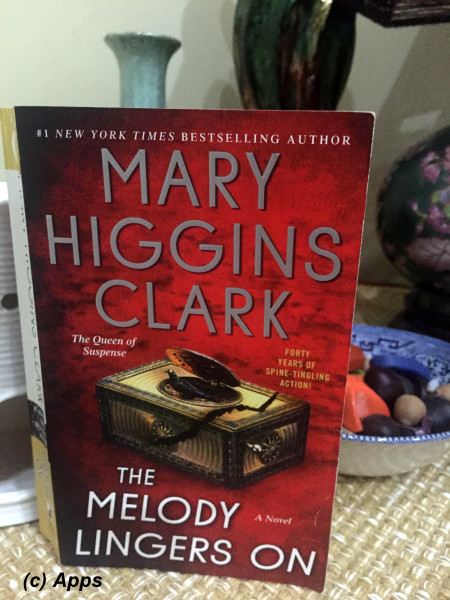 Elaine Marsha Harmon works on re-decorating on the town home that Eric Bennett and his mother Mrs. Anne Bennett move into after all the aftermath settles down - of course after all their estates have been taken by government to pay back the investors). Eric's father Parker Bennett had disappeared or dead two years ago when he went to sailing, and along with him disappeared five billion dollars of investors' money. FBI had been behind the Bennetts since then to uncover the money as well as to find if Parker Bennett was indeed dead. Lane on the other hand had lost her husband, Kenneth Kurner - a famous designer - to a drunk driver when she was pregnant with Katie. She had lost her father in a crash, Congressman Gregory Harmon, when she was seven years old. Her mother Alice Harmon Crowley had remarried to Dwight Crowley - wrote a daily political column in the Washington Post.

For some reason Lane believes the claim of innocence by Eric Bennett and gradually gets drawn to him. Her four-year old daughter Katie also gets attached to him. But FBI doesn’t back off and double their efforts to unravel the whole mystery. They had a strong feeling that one of the Bennetts was in cohorts with Parker Bennett, else such a big scam could not have been possible. FBI agent Rudy Shell despite the case going cold, pulls up all he can to find Parker Bennett and the money. And then Eleanor Becker gets indicted as co-conspirator with Parker Bennett - an attempt the prosecutor was doing to get her to give away the location of Parker and the money. All this brings Eric, Anne and the past to limelight again - impacting Lane as well as they frequent to a dinners, as her life gets exposed too.

Who is following Anne Bennett everywhere she goes? Is it the FBI? Or someone else behind the entire scam? Or one of the investors who had been duped? Why does Lane's step-father carry a grudge against Eric Bennett? As the story moves on we stumble across a few surprising turns but nothing scary enough to rise a chill up your spine. And eventually we find the answers for all our questions.

As we proceed through the plot, we come across quite a few characters, some of them amuse you, some irritate you and some make you wonder if they were behind all this - Glady Harper (Lane's Boss), Vivian Hall (Lane's office receptionist), Anthony "Tony" Russo (Neighbor of Eric and Anne Bennett in their new town home), Ranger Cole (One of the investor that Parker had duped), Sean Cunningham (Another investor that Parker had duped and self-appointed head of the Association for the Victims of Parker Bennett), Countess Sylvie de la Marco (Who had invested in Parker Fund but had taken out her money just a few weeks before Parker disappeared and a girlfriend to Parker for years), Marge O' Brian (long-time housekeeper of the Bennetts), Charles Manning (Another investor that Parker had duped), Patrick Adams (founder of the security firm and in whose hands Eric Bennett puts his case to investigate thoroughly and find his father and the money even at the cost of his reputation), Eleanor Becker (Parker's secretary for thirteen years) and Joel Weber (One of the investigators in Patrick Adams' office).

A thriller but with a bit of low tone compared to her normal novels. Yet it was a very charming read leading us through the world of hedge fund scams and innocent lives lost. The ending was smoothly done and expected. A good book to pick for those happy and lazy days.

1) Again the title of this book by Mary Higgins Clark is a title for a beautiful song. Sung by Ella Fitzgerald it was titled The Song Is Ended (but the Melody Lingers On) in 1958. However this has been sung by quite a many singers before then and since then.

2) I picked Ella Fitzgerald version, but Anne Bennett in the book loves the Irving Berlin version , although it's just a musical note with no lyrics.

3) Interesting choice of words used: doyenne (a woman who is most respected),
4) For some reason I had been reading Glady as Gladys all through the novel. Perhaps it was Gladys and shorted to Glady by author?
5) Mention of the poem The Twins by Henry Sambrooke Leigh is seen.
Tags: books, critique by amateur, reviews
Subscribe