Continuing with the critiques I started in 2015, here is the next in series – a book review.
Prologue: Go here
For Review of all books in this series: Go here

Stars: 2.5 / 5
Recommendation: A quick read with less to reminisce of the story later and more of just finishing it.

It was a very bad return trip from CA to CT that July. First night I had my flight cancelled and I spent at my cousin's home. The following the flight had technical issues and it was grounded with a flight for the following day. That night I ended up stranded at the airport, didn’t have patience to go back to my cousin's home again. So what do I do stranded there, other than making friends - buy a book (cause I was not carrying any with me in my carry-on this time around) and read through the alone time. Not wanting to put much brain to what I was reading, I bought two books from the new James Patterson Bookshots series - stories written at the speed of life.

Bookshots are short and fast paced stories under 150 pages and still give the same experience as of a regular novel. James Patterson started this series co-authoring with other authors - some new, some settled and some upcoming. They include James Patterson's some is favorite characters too like Alex Cross, Michael Bennett, and the Women’s Murder Club.

I am not a huge fan of James Patterson books except for some of his Alex Cross books. So, here you go, for what's worth here is my review on one his Bookshots.

Little Black Dress is co-authored with Emily Raymond and published in July of 2016. A plot focusing on Jane Avery - Magazine Editor - and her escapades in a little black dress. 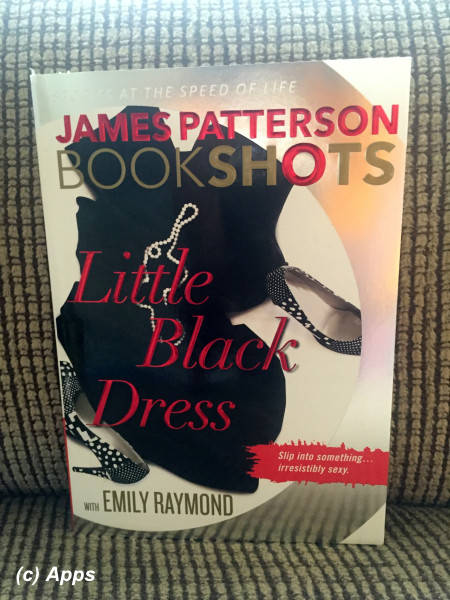 Jane Avery is a Metropolitan Magazine editor, divorced for two years and with little to no social life, much to the disappointment of her sister Mylissa and her best friend. However one day she looks into the window of Bergdorf sale rack a Little Black Dress that charms her. Despite it being a bit pricey - even on sale - she takes it. The dress makes her feel totally different which she puts to test on a lunch-time rendezvous with her colleague Michael Bishop at Four Seasons. What two years of therapy sessions with her therapist Dr. Alex Jensen hadn't done, this little tryst did - liberated her into a totally different world. Then she chooses and picks men at random places - some she flirts with, some she just hands out and with some she has the magnificent nights. Of course she has rules that she never crosses. But one day she goes into Red Room - the famous sex club that has everything from A to Z and beyond it. Did she make a mistake? Would she finally end up on the wrong-side of the street? Where are these trysts leading to?

The plot not only gives you taste of fantasies in sex, but also gives you a chill that has nothing to do with sex but everything to do with shivers and scares. A very fast reading story that certainly keeps you hooked even if it is for just a couple hours. What disappointed me was where was the author going with all this? It was a hotch potch of rendezvous that don’t tie anywhere during the course of the plot. If not for that, it was a decent read for a 100 pages story.

1) The author mentions that Cacti can be killed. I was surprised about it. Well, perhaps they would be.
2) A similar scene to how Richard Gere picks Julia Roberts in Pretty Woman, the heroine gets picked - but here she gets a lift in a cab on a very very rainy day.
3) The heroine is also a fact-checker and she can remember stuff that no one would think of. For instance - Cab services dates back to 1600s; as to why the cabs are yellow; etc. Impressive and Interesting.
Tags: books, bookshots, critique by amateur, reviews
Subscribe