Continuing with the critiques I started in 2015, here is the next in series – a book review.
Prologue: Go here
For review of all books in this series: Go here.
Stars: 2.5 / 5
Recommendation: All the elements of a mystery involved making it a thriller but leaves you flat at the end.

I'll Walk Alone is a thriller by Mary Higgins Clark published in April of 2011. The plot brings Alvirah Meehan - a $40 million dollar lottery winner and an amateur sleuth - together with Alexandra "Zan" Moreland in solving a kidnapping / murder tying to the investigation headed by the police on Zan. I am not a huge fan of Alvirah Meehan series by this author. However, I had picked this book not knowing it to be one. But since I picked it, I ended up reading it. :) 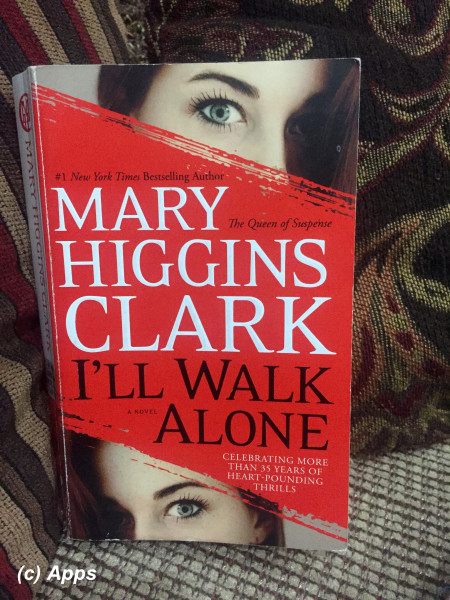 It has been two years since Matthew, Alexandra "Zan" Moreland and Edward "Ted" Carpenter's son, taken from the stroller in the park while the nanny was sleeping on the blanket beside. And Zan is flooded with the press coverage and rehashing of the incident everywhere on the day he was taken two years ago. Her ex-husband Ted had always blamed her for taking her work appointment on priority over looking after their child. Yet she braced herself to meet him for dinner that anniversary day - if one can say. But little did she know that she would face a much more bigger. A rag magazine Tell-All Weekly gets hold of pictures from some guy in England that shows someone looking like Zan picking the baby from the stroller while their baby sitter slept on the blanket nearby. All hell breaks loose for Zan the minute this comes out. Not just from the press but from her husband and cops as well. Who is trying to frame Zan? And why?

As Zan is facing being a suspect in the investigation, she comes across another problem with her finances. Someone is buying exuberant stuff on her credit cards and booking expensive vacations. She doesn’t remember doing it and no trace could be found as to who did it. Was Zan forgetting herself? Was she going insane in her thirst to search for Matthew? Alvirah Meehan and Willy Meehan come to Zan's rescue. Being an amateur sleuth herself Alvirah takes it upon herself to help Zan investigate her troubles, who and why they were causing and aid her in her defense while facing the cops and media.

On the very morning of the anniversary of Matthew's, a woman walks into the Father Aiden O'Brien's church and into his Reconciliation Room - Confession Room - and confesses that she is an accessory to a crime that has been ongoing and would be part of a murder that will be committed and she cannot stop neither. But before he could ask more she flees the church. What crime and murder was she referring to? Is it connected to what happened to Zan and Matthew? Who was the man in the church who followed Father O'Brien out? Was Tiffany deliberately sleeping on the day of Matthey's abduction? Was she in cohorts with anyone? If so, why and with whom? Why is Gloria Evans hiding the fact that she has child? That leads to the Hammels and Meehans dig further into Gloria Evans's life.

Detective Billy Collins who was the lead investigator when Matthew was abducted takes up the case again when the new evidence turns up. He had believed firmly that Zan was a victim. Now the evidence showing Zan or a look-a-like taking Matthew from the stroller puts his case back to square one and investigate in the direction he had deemed clear of any suspicion.

As the plot thickens we come across several characters, any number of whom could be suspect or suspects - famed designed Bartley Longe (obsessed with Zan and bent on destroying her reputation), Tiffany Shields (the babysitter who slept instead of keeping a watch on Matthew), Kevin Wilson (the architect of the new apartment building to which Zan had put in her bid for designing their model apartments), Penny Smith Hammel (a lottery winner herself and close friends with Alvirah and Willy Neehan) and her husband Bernie Hammel), Gloria Evans (a new tenant at a farmland at the end of the road where the Hammels lived), Josh (Zan's assistant), Nina Aldrich (the woman who's house Zan was at the time of the abduction), Melissa Knight (Client of Ted Carpenter) and Larry Post (Ted Carpenter's high-school friend and driver).

Another chilling story by Mary Higgins Clark but I had expected a more prominent role by Alvirah Meehan as an amateur sleuth. But she had a more pitying role than other books. Similar type of plotting like all her books, this also wrapped up neatly in a bow. It also pained to read that Zan was alone fighting against the world to prove her innocence. Would have had been a better plot if she had someone to aid her - ofcourse someone comes but way late in the plot.

A story having the elements of kidnap, murder, wrongly accused, identity theft and obsession. All the elements in there but left a little flat to read. Hopefully the next one would be a better one.

1) As always this title of Mary Higgins Clark also is the title of one of the famous songs Sung by Ricky Nelsen for his 1958 album titled Ricky Nelson.

2) There is a mention of T. S. Elliot's Murder in the Cathedral by the villain of the plot in this book. Another one to add to my list to read. :)
3) For some reason I was reading Zan as Zoe all through the book…My dyslexia or tongue-slipping acting here perhaps.. :P
Tags: alvirah meehan series, books, critique by amateur, reviews
Subscribe