Stars:  2.5 / 5
Recommendation: Although based on a famous book with a strong plot, the movie couldn’t do justice and paled.

While posting about Wuthering Heights (Check my review of the TV Movie here), I did mention that this book was used as a basis for the plot for the 1966 Indian film Dil Diya Dard Liya ( = Gave My Heart Got Pain In Return). I ended up watching the movie more so to compare with the book. Here is my take on the movie. 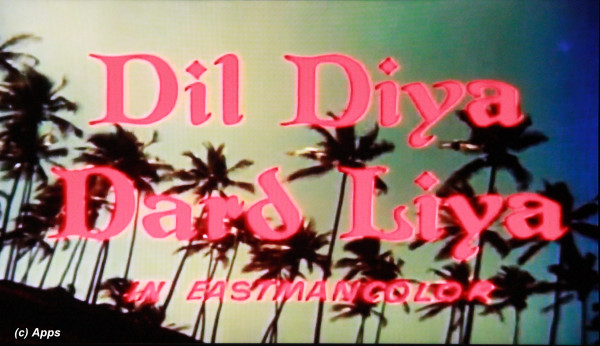 This 1966 Hindi film is directed by Abdul Rashid Kardar and Dilip Kumar and stars myriad of veteran actors in lead roles that include Dilip Kumar, Waheeda Rehman, Pran, Rehman, Shyama and Johnny Walker. Just like any Indian film, this one also comes with some memorable melodies for which the music is composed by legendary composer Naushad. This movie did not become a mass hit but was critically acclaimed giving nominations for Best Actor (for Dilip Kumar) and Best Supporting Actor (Pran) in the 14th Filmfare Awards in 1967. It is an Eastman Color movie.

The plot opens with a couple and a child caught on a ship in a storm. Only the child survives the storm and one of the villagers of the village the wrecked ship washes ashore takes the child who is only a months old boy. Elsewhere a king on sick-bed has been waiting for his son, but comes to know that his son and daughter-in-law died while braving the storm but a grandson had survived whose whereabouts are yet to be found. He dies letting his chief of staff know that all his estate and kingdom goes to the grandson (who had survived the storm).

The villager who takes the child from the wrecked ship is a kind Thakur who has two children of his own from two different wives - Ramesh (older son) and Roopa. He names the child Shankar and the three kids grow-up together. Although Ramesh has severe hatred towards Shankar and abuses him repeatedly. The neighboring estate's family has two kids of their own - Satish and Mala - who frequent Thakur's estate to play with the kids. The growing animosity and hatred between Ramesh and Shankar takes a toll on Thakur and he dies. The kids grow up to be adults but the hatred doesn’t reduce. When Ramesh (portrayed by Pren) comes to know that Roopa (portrayed by Waheeda Rehman) wants to marry Shankar, he beats Shankar and throws him out of the estate. He then gets Roopa engaged to Satish (portrayed by Rehman) - the childhood friend of the neighboring estate. Ramesh in-turn has also taken up really bad habits, keeps company of a courtesan and gets addicted to alcohol. One day Shankar returns filthy rich with the aspiration to patch up with Ramesh and ask for Roopa's hand. Although Ramesh is close to destitute (as he has already written off all of his money to the courtesan) still doesn’t accept Shankar. He also comes to know that Roopa is engaged to Satish. In a fit of rage, jealousy and penchant to take revenge of every one of them Shankar resorts to all sorts of schemes to abuse Roopa, insult Ramesh, hurt Satish and his sister Mala (portrayed by Shyama) to extent of cruelty. The plot continues with the fates of all the five characters being driven by one hand - towards their doom or towards their bright future, only one will know when watched in its entirety.

Typical of every Hindi movie that involves lost sons and families. A large locket with chain in Shankar's neck resembles the same locket that the King hands over to his chief of staff - thus tying it very neatly that Shankar is indeed the grandson of the king. 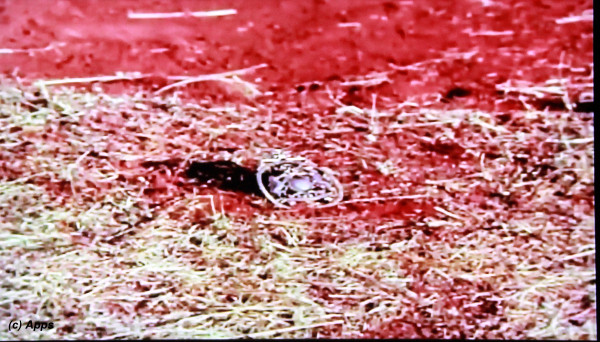 This also justifies for the fact how Shankar comes back filthy rich. The chief of staff (Diwan ji) is also a friend of Satish making another piece put into place perfectly. The comic relief comes from Johnny Walker and Tun Tun (portraying the roles of Mr. & Mrs. Murlidhar respectively) with a hoard of nine kids.

CGI to show the ship stuck in a storm is really good considering the equipment Indian film world would have had back then. There are definite faults with editing and in some cases the dialogues didn’t match the lip-reading. There are a few unnecessary fighting sequences too that wouldn't have hurt the movie if they had been removed too. An elaborate scene where Satish is trying to convince Roopa to marry him could have been pictured much better than showing both Satish and Roopa as two weak characters. The portion of the story about the king losing his son, about Shankar being the grandson, etc. is not part of the original Wuthering Heights novel. Perhaps to cater to Indian audience this piece has been added. Wonder what the scriptwriter had in mind while writing the dialogues. Some of them really loaded and out of proportion that was not necessary.

The ending is very different from the actual novel perhaps to cut it short. And like any Hindi movie they have given a happy ending. The movie had started really well, but the faulty editing and unnecessary fights and scenes made it a bearable movie. Changes made to the plot to cater to Indian audience almost caused it's failure. Some of the original charm should have been retained. If ever this would be made again I would hope they have the right star cast.

All in all a one-time watchable movie at home.

1) The young girl who portrayed the role of Roopa is Baby Farida who played as the younger version of quite a few leading actresses in the 60s. 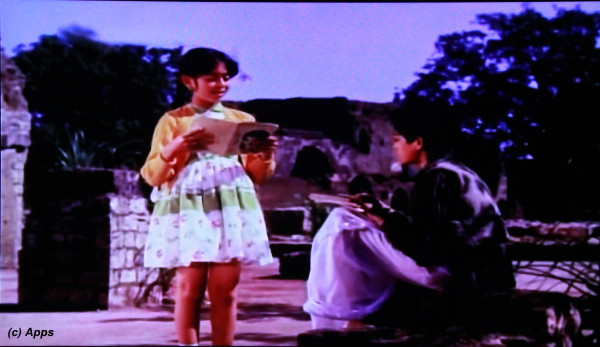 2) There are so many similarities in the way that Shah Rukh Khan acts and Dilip Kumar. Could be SRK took some of Dilip Sahib's tips and retained them as his career continued. Or is the rumor true that he is related to Dilip Sahib in some long twisted way.
Tags: critique by amateur, movies, reviews
Subscribe