Stars:  5 / 5
Recommendation: A movie that thoroughly entertains and at the same time teaches the ups and downs of being fame and being human.

Sultan is a Indian Hindi language romantic sports-drama film released in July of 2016 directed by Ali Abbas Zafar and produced by Aditya Chopra under the Yash Raj Films. The main leads in the film are Salman Khan in the title role and Anushka Sharma. The movie covers the life of Sultan Ali Khan a fictional wrestler from Haryana, India who goes on to be a champion wrestler. 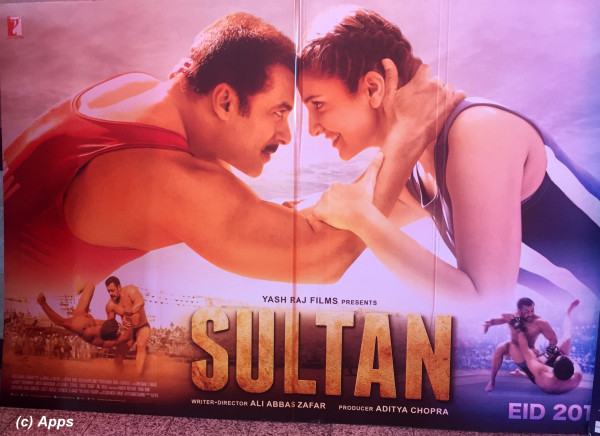 The plot opens with Aakash Oberoi, the founder of a private mixed-martial arts league, trying to hire a middle-aged ex-wrestling champion, Sultan Ali Khan, to salvage his league. Sultan however refuses the offer no matter how high the price is offered. Frustrated Aakash approaches Sultan's friend Govind for reasons. Govind then narrates the story of Sultan's life to stardom and thereafter. Eight years prior to the present time, Sultan, a normal man with his local cable company operator job, falls in love with Aarfa Hussain, a state-level wrestler and daughter of a local wrestling coach. To win her love he joins the wrestling club run by her father in the hopes of winning a state-level championship. With much hardships and initial reluctance from Aarfa as well as her father, Sultan however goes on to win the championship which starts his road to all kinds of championships. Together Aarfa and Sultan win quite a few tournaments during which time they fall in love and get married. When their names get announced for the Olympic games, Aarfa comes to know she is pregnant, so Sultan alone participates winning a gold and fulfilling her dream. But the win turns him into an arrogant person creating a rift between Aarfa and Sultan. The plot continues with how Aarfa and Sultan break apart, and how Sultan reluctantly joins the mixed-martial arts leagues, and eventually wins back Aarfa.

Randeep Hooda portrays the role of Sultan's coach in mixed-martial arts. He has a very short role but his presence is well noticed. The movie has quite a few beautiful songs, however my favorite is the male version of the song titled Jag Ghoomeya. Sung by Rahet Fateh Ali Khan, its Lyrics penned by Irshad Kamil and Music composed by Vishal - Shekhar.

A very beautiful movie depicting not grit, courage and determination but also the flaws of being human and how fame can destroy lives if not controlled on a leash. Salman Khan fitted the role. But Anushka seemed quite young to the role, but she was tough and stood up to the role.

It had been a long time that I had been to movies with my family, so this was definitely a worth one watching with family too. Don’t miss it if you get a chance to see it.
Tags: critique by amateur, movies, reviews
Subscribe