Continuing with the critiques I started in 2015, here is the next in series – a book review.
Prologue: Go here
For review of all books in the Guild Hunter series: Go here.

Archangel's Enigma is the eighth book in the Guild Hunter series by Nalini Singh published in September of 2015. Although the plot still concerns around Raphael and his consort Elenena Parker Deveraux, this book primarily revolves around Naasir - one of Raphael's Seven and a chimera / blend of human with a white tiger - and Andromeda - scholar at the Refuge, an almost 400 yr old angel. 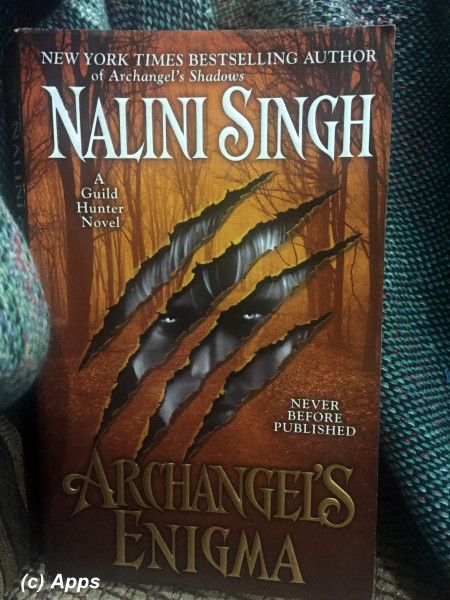 The plot picks up where the sixth book Archangel's Legion (My review of that book can be found here). Lijuan - Archangel of China - had been seriously twice by Raphael - Archangel of New York. Many had fear that Lijuan had turned into something more than an ancient and now Lijuan is recouping in her throne room, waiting for the "becoming" to complete. But she hasn’t forgiven Raphael - her thirst for revenge increases as each day passes. And then The Scribe comes to her with the finished analysis of The Prophecy, the origins of which trace back to Archangel Cassandra - an ancient of ancients who had been sleeping for so long that her existence has become a myth now. And according to The Prophecy a  silver winged Sleeper will wake before the time. The Scribe concludes that it is Alexander. Will Lijuan to have revenge on Raphael wake Alexander before the time? What is the hidden meaning behind the Prophecy? Is the Scribe right?

Raphael gets wind of what Lijuan has plans for with The Prophecy. He sends out Naasir to find the sleeping location of Alexander. And in this search he need to go to The Refuge first, meet with Andromeda and then But Naasir has been looking for his mate since seven months and he is yet to find her. While lugging Andromeda around with him, will he find his mate? Or is Andromeda his answer too? Andromeda on the other hand, although settled as a scholar at The Refuge, is holding a huge secret that would not only forever stop her research and work at The Refuge but also get every angel and vampire there feel betrayed. Will Andromeda face the truth? Then Xi - general to Lijuan - kidnaps Andromeda from The Refuge and takes her to Lijuan's court. Naasir and Jason reach Lijuan's court to save her. They travel to Caliane's Amanat for repelenishment before moving further on to the location where Alexander might be sleeping.

Dahariel - second in command to Astaad, Archangel of the Pacific Isles - had taught Andromeda the skills with weapons and become a warrior. But he had not asked for anything in return. Why did Dahariel did this good gesture when he was fully evil? Would there be a future payment asked of Andromeda? Who is Dahariel to Andromeda? While Naasir and Andromeda are on the hunt for the location of Alexander, someone is killing the angels who are changing and getting close to become cadre as a result The Cascade. Who is killing them? And to what purpose? To eliminate competition? Or to create rift amongst the existing cadre?

As their quest for Alexander proceeds, the closeness between Naasir and Andromeda increases. Andromeda worried her days of freedom are down to numbers want to latch on every second she can get with Naasir, but she is still yet to share her biggest secret with Naasir. And she has a vow of Celibacy that can be broken only if her mate can bring her the Star Grimoire - one of the Seven Lost Angelic Treasures, an ancient book that no one has seen and that documented of all the fantastic and weird / odd things in the world. Naasir had decided that Andromeda was his mate so he is bent on finding that damned book even though it may seem impossible. But there is something about the description of the book that touches something in his memory that fades away before he catches it. Will he find that again and the book? Will he make Andromeda his before the time runs out for her?

Andromeda also has a distinct feeling that somehow Naasir is connected to the Ancient Alexander - as both the share the same silver in his eyes and in Alexander's wings. But how is that possible? Naasir has a childhood and grew up in The Refuge. He cannot be had Made as a child - that was against all the angelic laws and the biggest crime. Who is Naasir? Just as determined is Naasir to find the book to claim Andromeda, so is she to unravel his mystery.

We get to see how deep a relationship Dmitri and Naasir held together - resembling close to a father and son. We also get the history behind ho Xi comes about to be in Lijuan's court and how he ends being her General. Andromeda was very close to conclude that his wings with the patriotic colors of Lijuan had cause for Lijuan to look at Xi in the first place. Will they together find Alexander before Lijuan reaches? What plans has Lijuan for this time against the world? Will Andromeda share her deepest secret and trust Naasir enough?

For so long Dmitiri's book was my favorite (His story told in the fourth book Archangel's Blade. Check my review here), but this is becoming my fast favorite. Naasir is truly enigmatic and only as wild and as secretive as Andormeda is can understand him. Another brilliant novel in the series that Nalini Singh has spun. Four different plots running parallel, yet keeping the main plot between Naasir and Andromeda on top and along with mixing bits and pieces of previous plots to give it a continuity. Well written and thoroughly enjoyed.

1) Andromeda is also the granddaughter of Charisemnon – Archangel of North Africa who had caused The Falling (Occurs in the sixth book in this series Archangel's Legion - Check my review of the book here).
2) Illium - the blue-winged angel and one of Raphael's Seven - is growing fast in his power due to The Cascade and no one knows what it would mean - for good or for worse. And Illium falls from the sky with no reason and is barely managed to be saved by Aodhan and Raphael. What is happening with Illium? Is he ascending to archangel faster than his body can take?
3) Lijuan's Forbidden City was  gift from one of the ancient architects, Suyin. However it has been recorded in history that she had committed suicide in a sad and mysterious manner. Yet, Andromeda finds her in Lijuan's citadel, frequently coming out of her sleep - which is what she had chosen - to see if her aunt had survived or evolved or been destroyed, for her aunt is none other than Lijuan.
4) Michaela - Archangel of Central Europe - could be pregnant. Could Dahariel indeed have been capable of it? Or is Michaela playing out a different identity to hide her real evolving due to The Cascade? Or whatever Uram - the Archangel of Russia who had gone mad and eventually was killed by Rapahel - had done to her had left something of his in her that is surfacing now? We have to wait and see as the series proceeds.
5) Training of Izak - a fledgling angel who was hurt badly when The Falling occurred - not only to regain his strength but also to be part of Elena's Guard continues in this book. Also Janvier and Ashwini join Izak in training him. But will they be part of Elena's Guard is something one has to wait and see.
6) Raphael also develops a unique ability to fly like a bullet with his wings on fire that gives him the much needed speed to reach far distances in seconds. This is part of the evolution he is facing as a result of The Cascade.
7) There is still mystery surrounding what happened to Aodhan. I wish the author's next book would be Aodhan's story.
Tags: books, critique by amateur, guild hunter, reviews
Subscribe