Ford County Stories is a short collection of novellas by John Grisham published in November 2009. This is his first collection of short stories containing of 7 of them - Blood Drive, Fetching Raymond, Fish Files, Casino, Michael's Room, Quiet Haven and Funny Boy. 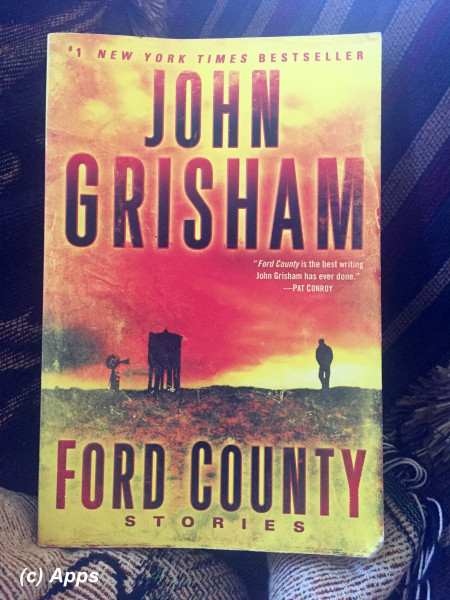 The first story titled Blood Drive is literally about three men who drive down to Memphis to donate blood but end up in rather difficult circumstances. A young man named Bailey from Box Hill is injured during a construction job and admitted to a hospital in Memphis. Upon much deliberation and getting more accurate information from Memphis, Aggie, Calvin and Roger set off to Memphis to donate the much needed blood to Bailey. However their drive gets detoured in many ways than one can think of primarily due to the reckless drinking of Roger and the inability of Calvin and Aggie to stand-up for themselves and the overall selfish desire to see Memphis and much more in it. In the end all four men return home at various stages and in various intervals with various results.

The second story titled Fetching Raymond is about the Graney family - Inez Graney (the mother), Leon Graney (the older son), Butch Graney (the middle son) and Raymond Graney (the youngest son). Raymond is being held on death penalty at Parchman prison waiting for his execution. On the day of the execution, Inez, Leon and Butch drive to the prison in a van taken on loan to bring Raymond back after the deed. Raymond still had hope that there would be a last minute reversal. But with Graneys who have always been dealing with the law, more from the wrong-side, the hope of it was little to none. This was a rather hard story involving hard crimes. The characters also come across very callous and with fewer emotions that depict humanity.

The third story titled Fish Files is about a litigator Mack Stafford who gets a call one day regarding one his long forgotten case about suing a company in South Korea. This unexpected call not only leads him to his own divorce and bankruptcy but also gives him the much needed opening to move in a different direction.

The fourth story titled Casino opens up with Bobby Carl Leach - a local playboy and a person of infamous reputation - teams up with Chief Larry - who considers himself to be a Yazoo descendent to build a Casino called Lucky Jack in Ford County. But the real star of the story Sidney Lewis doesn’t show up until midway through the story. That was the element of surprise that latched me on to it to finish it without putting the book down. A story of scamming, suing and gambling that definitely needs the law to read its own law to keep with the these characters.

The fifth story Michael's Room takes us through the aftermath of what a tough litigator's case created. Stanley Wade had defended an intoxicated Dr. Trane against a lawsuit filed by Jim Cranwell and his family. Although Stanley had come out victorious, eight years later he ends up facing the aftermath that family still endured because of that lawsuit.

The sixth story Quiet Haven is about a person Gilbert Griffin posing as an orderly at the retirement home Quiet Haven in Clanton. Gil comes in as an orderly but he has a much more ulterior motive - to find the mishappenings at the home and report it back to the company he works for in exposing the evil doings of whoever owns Quiet Haven and eventually come out with a hefty settlement. However this time around he hits jackpot in the form of Lyle Spurlock - a resident who has quite a substantial asset to his name.

The seventh story Funny Boy is set in 1980s when people were scared about AIDS, mistaken for it to be contacted through touch. Isaac Keane's outcasted son Adrian Keane comes back to Canton to live his final days with his family. But his family puts him in one of their properties in the black side of the town - making a deal with one of the resident to take care of him. This was a heart-wrenching tale.

A very quick read surprisingly from an author who goes to details as much as he can. Yet not a single story bored me. Definite boo to pick if you are looking for a short-term company with books.

1) Ford County is in northwest Mississippi state. John Grisham had set a few of his earlier books in this place -  A Time to Kill, The Summons, The Chamber, The Last Juror, and Sycamore Row.
2) Raymond Graney in the second story "Fetching Raymond" makes a very gallant attempt to sing the Blues to his brothers and his mother. He sings a song that was an old tune by Mudcat Malone - whom I couldn’t find anything about on internet. He also sings another by Little Bennie Burke - even he is not to be found anywhere for real.
3) Grammatical errors: On Pg 105, para 4, the second line instead of "expires" it is typed as "expired".
4) Author explains in-detail what the phrase "Don't quote me on that" in the last story of this book (Pg. 266). Considering this book was published in 2009 I would think that phrase would have been commonly known. But again if the story was indeed written at the time the plot was set (sometime in mid-1980s) then it does make a lot of sense to keep this explanation. I wonder which one was it. :)
5) Author also uses the term "coloreds" for people who are non-white in descendent in the last story (Pg 268). This makes me think that this story indeed was written in 1980s. :)
Tags: books, critique by amateur, reviews
Subscribe