Stars: 2.5 / 5
Recommendation: If you want an easy and quick murder mystery pick it up and you will enjoy it. But this one will put you to sleep too, sadly.

Dying To Retire is the 21st book in the Murder, She Wrote series by Donald Bain and fictional writer Jessica Fletcher based on the popular TV Show of the same name. The book was published in 2004. This time the plot is set in Florida. 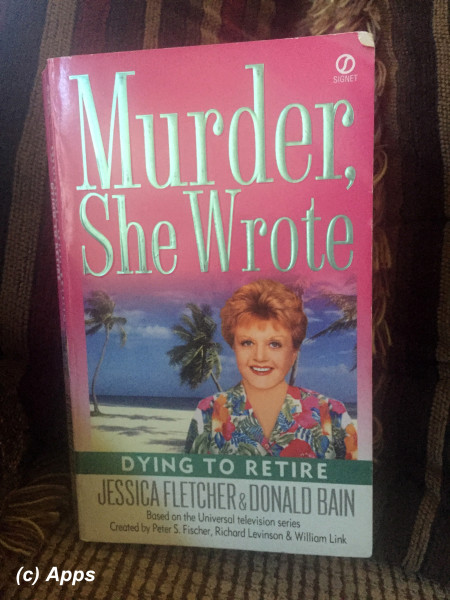 Jessica Fletcher along with her friends from Cabot Cove - Dr. Seth Hazlitt, Sheriff Morton Metzger and his wife Maureen Metzger - land in Florida to attend the funeral of their dear friend Portia Shelby. She was a neighbor and dear friend to all of them while she was living in Cabot Cove, Maine. However, after reaching Portia's residence they come to know that the coroner hadn't released her body yet. Why hadn't her body been released? Her death was supposed to be of natural causes. Was her death cause of something else? Like Murder? But why would anyone want to murder Portia? While all these questions mull in their brains the four Cabot Cove's attend the wake of Portia Shelby without her body.

Seth finds some diet pills called Ephedra in Portia's medicine cabinet. But that drug was deemed dangerous after a few sports people died. So why was it in the pill box that Portia used? Who had slipped those pills into her daily routine? Jessica also finds out that Portia has been fighting quite a few broken rules by the management and later she took a stand against the real estate developer DeWitt Wainsott in stopping three high-rise buildings to erect between their condominiums and the water. Was someone offended by it and induced an early stop to her heart? As always she again butts head against the local cops. But this time the assigned detective - Detective Zach Shippee - for once thinks in similar line as Jessica and is not ready rule out Portia's death as natural causes. Yet he is still reluctant to share all the details he can.

As the investigation proceeds, Jessica meets with quite a few of Portia's friends and associates that she has cause to believe could have reason to hurt Portia - Helen Davison (Portia's neighbor) and her husband Miles Davison, Mark Rosner (Manager of the condominiums that Portia lived in), Clarence Shelby (Portia's quite infamous husband), Sam Lewis (Another neighbor of Portia and who had also played chauffer to the Cabot Cove folks) and his wife Minnie Lewis, Tony Columbo (related to the New York Mob family Columbos and owns a Pizzeria - Potofino - down the village), Earl and Burl Simmons (Twin Brothers and Maintenance people for the condominiums), Harry (the local pharmacist and runs Weinstein's Pharmacy), Monica Kotansky (another neighbor of Portia) and her sister Carrie, DeWitt Wainscott (The real estate developer), Amelia Rodriguez (Worked at Helen's beauty shop and ally to Portia Shelby), Olga Piper (Another resident and friend of Portia), Gabby (a fisherman and friend of Truman) and Dr. Truman Buckley (Friend of Seth Hazlitt).

Although the plot is interesting, the book had been a rather boring one to read for me. What with so much of description of the Foreverglades and Key West, a full chapter about Seth and Jessica's drive to Key West, the ramblings with Seth's friend Truman - tired me out just reading them. Jessica Fletcher also seems to be lost in her thoughts a lot of the times, tuning out conversations. This is so unlike any of her roles portrayed in other books.

Not a thoroughly enjoyable book as others, but something you could pick for those lazy days and if you really want to sleep (True, actually dozed off more than once while I was reading this book.)

1) Jessica mentions that she knows a very good police man named Columbo and he is not related to mob when she talks to Sam Levis (Pg. 18). I am sure he is alluding to Homicide Detective Columbo at LAPD from the famous series Columbo. I always wondered why there was no cross-over episodes between both TV Shows. Would have been wonderful to see both these characters work together.
2) Jessica remembers the movie Key Largo starring Lauren Bacall and Humphrey Bogart while she and Seth travel from Foreverglades to Key West. Havent seen that movie in a while. Might as well watch it again to post a review of it here. :)
3) Jessica tours Ernst Hemingway's home while she is in Key West. I had been twice to that place but hadnt known about his residence. She reminisces that Hemingway perhaps had written some his most famous works there - Death in the Afternoon, The Snow of Kilimanjaro. Neither books I had read and hopefully will do so in future.
4) Gabby mentions that he doesn’t remember his real name. But someone said he was an exact copy of Gabby Hayes from The Roy Rogers Show and that name stuck to him. Never seen that show either. Perhaps will check it out.
5) Grammatical errors seen - A repeat of "you" in the fifth line from the bottom (Pg. 227)
Tags: books, critique by amateur, murder she wrote, reviews
Subscribe