Stars: 4 / 5
Recommendation: If you want an easy and quick murder mystery pick it up and you will enjoy it. This time it adds more chills.

Murder In A Minor Key is the16th book in the Murder, She Wrote series by Donald Bain and fictional writer Jessica Fletcher based on the popular TV Show of the same name. The book was published in 2001. This time around the plot is set in New Orleans, LA. 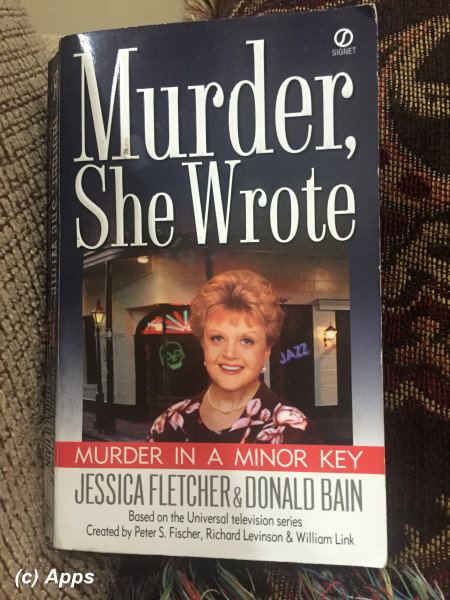 Jessica Fletcher is in New Orleans promoting her latest murder mystery Murder In A Minor Key (yes, the title of this book and her book title in the plot are the same). A few weeks before Jessica arrives, a man named Elijah Williams was found murdered against the tomb of nineteenth century voodoo queen Marie Laveau in Crescent City. Eljah Williams had disappeared 15 years ago on a fishing trip with a popular politician, Virgil Franklin. Although the politician's mauled body was found, Elijah was never found until his body surfaced now. Jessica finds it interesting that the police is ruling it as accidental and nothing beyond.

She meets with her friend and music critic Wayne Copley during her stay in New Orleans. Wayne has been researching the life of Alphonse LeCoeur, known as Little Red who played trumpet around the same time as Buddy Bolden. He was also searching for the last recordings of these two folks together that he had left on wax cylinders. Jessica soon learns that there have been death threats against Wayne and he has not been taking them seriously. And then Wayne turns up dead at the exact same position and same place where Elijah Williams was found a few weeks before. Although the cops have not mentioned of any connection between the two murders and they don’t even think if Wayne was murdered, Jessica is confident that both the murders and the Virgil Franklin's death 15 years ago are all connected.

But how are they connected? Does it have anything to do with Little Red's last known recordings? Do they even exist? Why is someone trying desperately to hide those recordings? What is on them that will hurt someone now seriously?  How are all these connected to Marie Laveau's grave? What does all this have to do with Voodoo? Had Wayne practiced the rituals with the wrong kind of folks? Why was Ileana Montalvo insistent on giving gris-gris to Jessica for protection? Is Jessica's life in danger too? As always Jessica butts her head with the NOPD to get some answers, specifically with Detective Chris Steppe and his partner P.O. Teddy Bailin.

People that Jessica considers could be suspects or involved with the murders or could aide her in solving - Julian Broadbent (an investigative reporter and author of four best-selling books based on true exposes that he had investigated on), Doris Burns (a historian and author), Charlie Gable (book editor of Lagniappe - a weekend entertainment in the Times-Picayune, the city's daily newspaper - and hosts regular Book Club Breakfasts where best-sellers are reviewed), Philippe Beaudin (Mayor Maurice Amadour's top aide), David Stewart (reporter for the Tulate student newspaper), Napolean Dubois (a street performer who comes to Mrs. Fletcher's rescue on occasion), Stanley and Stella (Street vendors who were avid fans of Little Red LeCoeur), Simon West (an antique store owner), Ileana Montalvo (one of the voodoo priests that Jessica meets along), Mayor Maurice Amadour and his wife Marguerite Amadour, Arrcher Levinson (Wayne's assistant) and Clarice Copley-Cruz (Wayne's sister).

A truly chilling mystery for such easy reads that we normally get from this series. It left me with a heart heavy and satisfied at the same time. But I must say the descriptive chapters about New Orleans could have been mellowed down a bit. Murder mystery involving unsolved murder case, voodoo practice, snakes and jazz legends - all tied neatly in a bow between the two covers of this book. Another wonderful mystery from the author and the series.

1) Some of the places Jessica visits while in New Orleans:
a. Antoine's (More about the restaurant here) is a French quarter restaurant since the 1840s.
b. Simon West's Antiques also called as Simon of New Orleans
2) Jessica meets a couple selling hats and other wares on the streets of New Orleans who called themselves Stanley and Stella. Stella jokes about their names being similar to the lead characters in Tennessee Williams's A Streetcar Named Desire. I havent watch the movie based on the book or read the book. Something to add to my list.
3) Minnie Pearl was a famous country music singer-comic, who always wore hats with its price tag dangling. When she was referenced in the book I was surprised and had to lookup on her. Indeed she did that. How odd for one to do so.
4) P. D. James's first novel Cover Her Face is mentioned. Another adding to my list. :)
5) Jessica watches a movie titled Gaslight starring Ingrid Berman, Charles Boyer and Joseph Cotton. A classic I believe that I am adding to my list to watch. ;)
6) Grammatical Errors seen - "addiction" is spelled as "addition" on the last but one line on Pg. 117.
Tags: books, critique by amateur, murder she wrote, reviews
Subscribe