Stars: 3 / 5
Recommendation: Looking for a thriller with chills, love, history and of course a murder, this is the one to pick.

Remember Me is a 1994 suspense thriller by Mary Higgins Clark. Another of her chilling novels that always send a shiver up your back. The plot this time around is set in Cape Cod, MA. 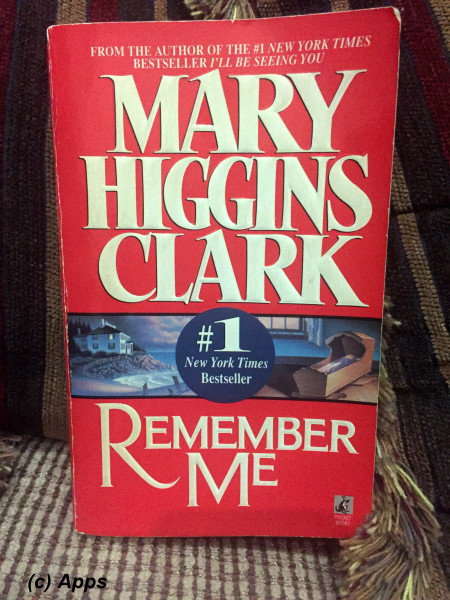 The book opens with Vivian Carpenter goes missing when she and her husband Scott Covey were hit by a five-foot wave while scuba diving in Chatham, MA. Her body was found two weeks later washed ashore. They were newlyweds and had bought a house from Elaine Atkins - the real estate agent in Chatham - in Chatham, MA. According to the reports even though Vivian was a good swimmer she wasn’t a good diver and Scott was teaching her. They had not heard any weather warnings before they went to scuba diving right before the storm.

Vivian Carpenter comes from a family of achievers - Carpenters from Boston - but had not been successful in her own way, but came into a considerable amount of trust that her grandmother left when she turned 21. Scott Covey was assistant business manager at Cape Playhouse before he got married to Vivian. Elaine's friend Adam Nichols - a high-profile criminal defense attorney - found it very coincidental that a stranger comes from nowhere, marries a rich woman and she dies in an accident within three months of their marriage. Especially Vivian had come into five million dollars as her trust that she had left everything to Scott in her will.

Incidentally Adam and his wife Menley have been looking to rent a vacation home for themselves for a month in Chatham, MA. With help of Elaine they zero their chances on to Remember House - a captain's home that comes with a story. It is famed to be having built by Captain Andrew Freeman in 1703 for his bride but deserted her when he found she got engaged to someone else when he was at sea.

Adam and Menley have gone through a tragedy - they lose their first child Bobby in an accident - which keeps coming back to haunt Menley often leading to her anxiety attacks. They had a brief period of separation but then Hannah - a girl child - comes into their life making their bond stronger. This vacation in Chatham is supposed to give them the much needed respite, keep Menley off her anxiety attacks and finally to have a chance at becoming a family. Menley also is a successful children's book author yet she still visits her psychiatrist - Dr. Kaufman - weekly for her anxiety attacks. This vacation is also part of her prescription from Dr. Kaufman.

As Adam and Menley are settling in their vacation home, Nathaniel Coogan, a detective at the Cape's Police Department, requests to be on the case even though Vivian's death was ruled out accidental. Something about the autopsy pictures bothered him. What is it? On talking to Henry he had a distinct feeling that Henry was hiding something about Scott Covey. What could that be? Then when an inquest is put to investigate further to determine if Vivian Carpenter was murdered, Scott Covey hires Adam to defend his case. But did Scott really kill Vivian? Then Phoebe, Henry's wife, keeps talking about someone being in the Remember House and that Adam's wife Menley is in danger. What is it that Dr. Phoebe remembers at the back of the mind but the Alzheimer's is fogging it all? Whom did she see at Remember Home? Has that have any connection to what Adam and Menley are going through?

As days move by little things start happening at the Remember House for Adam and Menley. For instance, someone covering Hannah with a blanket in the night even though neither Adam nor Menley remember doing it. The cradle rocking by itself, the baby's room having a weird feeling. Not remembering to move the baby from the bed to the cradle. Waking up with weird dreams. Menley wondered if she was driving herself crazy by becoming panicky all the time. But what is happening? Why is this happening? If she is not going crazy, who is doing all these things?

During their stay in Remember House, Adam and Menley meet quite a few people around - Henry Sprague and his wife Dr. Phoebe Cummings Sprague (their neighbors and that Phoebe was being admitted to a home as her Alzheimer's was catching up pretty fast), Elaine Atkins (real estate agency owner as well as friend to Adam Nichols), Carrie Bell (cleaning services that Elaine employed for the Remember House), Nathaniel Coogan (detective in at Cape's Police Department) and his wife Debbie, Amy (Elaine's future step-daughter and baby sitter for the Nicholses), John Nelson (an insurance agency owner and fiancé of Elaine Atkins) and Jan Paley (who had owned Remember House before the Nicholses rented it).

Three parallel stories, four if you count the past story of the original residents of the Remember House way back in early 1700s, run through the book with many little side-plots weaved in. Mid-way through the book I had a distinct feeling of who was behind all that was happening with Menley in the Remember House. It was so exciting to see that my hunch was absolutely right. But my hunch for who killed Vivian Carpenter wasn’t exactly accurate - what a shame! Anyways, I liked Clark's take on that better.

A story filled with history, love, setting the wrong right and of belief and trust. A well panned out plot that did give me shivers now and then. Next time I am in an old house I am sure going to remember this tale. Clark is at her best again with this book and her tapestry of murder mystery is a perfect one.

1) In the acknowledgement section, Mary Higgins Clark mentions that the basis for this book was The Narrow Land by Elizabeth Reynard that she had come across 20 years prior to this book was written. Hmm, Something to add to my reading list and future posts.
Tags: books, critique by amateur, reviews
Subscribe