The Highland Fling Murders is the 8th book in the Murder, She Wrote series by Donald Bain and fictional writer Jessica Fletcher based on the popular TV Show of the same name. The book was published in 1997. The plot is partly set in London and partly in Wick, Scotland. 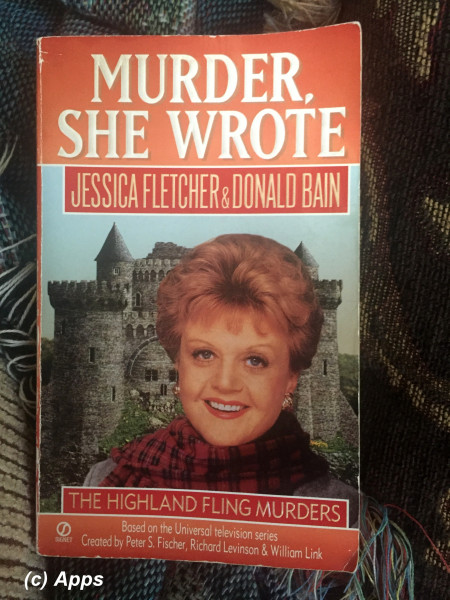 Jessica Fletcher finds herself with eleven other people from Cabot Cove on a trip to London when her British publisher Archibald Semple persuaded her to come to England to promote her latest novel. When she relates her trip to her friend George Sutherland - a Scotland Detective - he insists on her staying at his castle in Wick, Scotland along with her friends after their visit in London commences. And so the troop heads to U. K. with London as their first stop.

On the very first evening of their trip in London, Jed and Alicia Richardson are held captive in The Tower of London by a demented person. He says he is a descendent of Catherine Hayes who was burned at stake in 1725 and would like to have the Parliament clear their name else he would shoot the hostages. Jessica Fletcher enlists the help of George Sutherland in doing whatever she can to get her friends Jed and Alicia Richardson rescued. Eventually Jed and Alicia are rescued with Jessica playing a huge part in it. Although shaken, the group continues the tour of London and finally land in Wick, Scotland.

Alicia Richardson however is still shaken of her episode with the kidnapper and fears that he has put a curse on them. She starts eyeing every new person with suspicion and fear. And keeps seeing orange eyes in everyone she suspects. While everyone is settling in Sutherland's Castle in Wick, George expresses to Jessica that his castle is haunted too. Per him, it is supposedly haunted by Isobel Gowdie's descendent who was a relative of George Sutherland. Isobel Gowdie however was tried for witchcraft in 1662. (More about here can be found here). This relative is seen wearing all white gown but with cross carved into her throat, sometimes blood flowing through it and has orange eyes. Jessica wonders if there is a connection between the lore and what Alicia was feeling - although Jessica doesn’t believe in ghosts. But that very evening right before dinner, Jessica sees an apparition in white gown with red stain growing along her bodice, with eyes of cooper color and utters "Gie a heize" before disappearing - much to Jessica's startle.

Apart from the 12 folks from Cabot Cove and George Sutherland there were four other guests residing at the Castle - Mr. Brock Peterman and his wife Tammy (a movie producer from Hollywood mainly featuring horror flicks), Dr. Geoffrey Symington and his wife Helen (a doctor who does research on ghosts and apparitions). One of the staff member, a young man named Malcolm, chats up with Jessica the following day about a book he was writing - based on a real murder that occurred 20 years ago in the same village, murder of Evelyn Gowdie, descendent of Isobel Gowdie and relative to George Sutherland who apparently haunted his castle. Later that day Jessica - who was taking a day off from sightseeing as opposed to her fellow travelers - while taking a walk to town's center accidentally finds the body of Daisy Wemyss murdered by a pitchfork to her chest and a cross carved into her throat - the very same fashion how Isobel Gowdie was supposedly sentenced to death and the same fashion Evelyn Gowdie was murdered 20 years earlier. Now Jessica is caught again in the middle of a murder when she all wanted to do was spend quality time with George Sutherland and enjoy the vacation with her friends from Cabot Cove.

Who had killed both Evelyn Gowdie and Daisy Wemyss? Why are they being replicated to reflect the death of Isobel Gowdie? What is this connected with orange eyes that Alice keeps seeing in everyone's eyes whom she suspects? Was the kidnapper of Jed and Alicia Richardson related to these killings and hauntings somehow? What is Dr. Geoffrey Symington researching on? Is the lore from Sutherland's family's past that is still haunting everyone behind all these killings?

Apart from this George has been facing trouble keep his Castle up to shape. Even with it converted to hotel he had been unable to keep good staff because of the sightings of ghost and now add a murder to it. Also a certain section of people in Wick are dead against George keeping the castle. They feel that if he sells then all the curse that was put on Wick will go away. Will George sell it away, his family mansion? Is someone trying to deliberately create apparitions so George will be forced to sell? How is this related to murders of all three women - one 300 hundred years old, one 20 years old and one recent? With all the curses and witches going around, will they have to look into the lores and curses to solve the mystery?

In the book A Little Yuletide Mystery (Book #11) (My review of the book here), one of the character Mary Walther mentions about Jessica saving Jed Richardson and his wife Alicia Richardson from a madman who had kidnapped them while they were are touring London and vacationing at George Sutherland's castle in Wick, Scotland. When I had read it then I assumed it was a plot-additive for the sake of that book. However, on reading this book, it turns out that incident happened in this book which was written three books earlier than A Little Yuletide Mystery. :)

The plot is a mix of fantasy and fiction albeit blended well. Although there were two full chapters about fishing that I almost fell asleep on. Perhaps the author could have cut it short and still keep the significance of the chapters in the book. Towards the end of the book, as always all questions are answered except for the murder of Evelyn Gowdie - that still remained open. I would have loved to see a closure for the same too? That said, again a very good read for the mysteries that come from this series.

1) Places in London that are real than fiction:
a. The Athenaeum Hotel in London that Jessica and her friends stay while visiting London is really existing.
b. Wilton's on Jermyn St in London
2) Interested English usage in the book such as - nattily (to mean someone is neat and smart), slovenliness (be messy or unkempt), gillie (a Scottish word for a fishing guide),
3) In 1732, Sarah Malcolm was sentenced to be hanged after finding guilty of murdering Lydia Duncomb. (More here) It is said that her spirit still walks roaming in the Highlands.
4) The actual story of Catherine Hayes can be found here. She is in fact a murderer than a witch. Although according to Wiki, she is burned at stake in 1726 as opposed to what this book says.
5) Although it was never recorded how Isobel Gowdie was sentenced to death, but the author did spin an interesting story here.
6) Jessica reads a book titled Black Alley by Mickey Spillane during her stay at Wick. I have never read his books, but something to consider for future blog posts. :)
7) Grammatical errors in the book:
a. On Pg. 52, around para 4, "Isobel" is spelt as "Isabell" and everywhere else her name is referred in the book.
b. On Pg. 191, in second para, there is no space between "on it" making it one word "onit" with no meaning to it.
8) In the end, Jessica alludes to a time when she was spending in San Francisco, promoting a book, spending with George Sutherland and inadvertently got involved in a case that they together solve. That tale is written in the 1995 book "Martinis & Mayhem" (My review here) - book #5, written three books earlier than this current book.
9) George finally expresses his love towards Jessica, but Jessica is unable to express back as she is more content to live with memories of her husband and just be a friend to George.
Tags: books, critique by amateur, murder she wrote, reviews
Subscribe