Stars:  5 / 5
Recommendation: A successful satirical comedy that will hit you in the face giving you a dose of much needed reality.

Jaane Bhi Do Yaaro ( = Let It Go, Friends) is a 1983 hit Hindi Comedy film that takes a satirical approach on the corruption in Indian politics, press, and businesses. The movie cast a myriad of characters who have had played their roles in one way or another as comedian actors or non-mainstream roles. It went on to become a super hit getting it's Director Kundan Shah Indira Gandhi Award for Best First Film of a Director that year. After at three month struggle, assistant editor Kamdar (portrayed by Rajesh Puri) of the local newspaper Khabardar ( = Caution) comes to them with an assignment. Khabardar's main agenda is to expose the lives of rich and famous whose Editor is Shoba Sen (portrayed by Bhakti Barve). A similar secret assignment is given to them - expose the dealings of the famous and unscrupulous builder Tarneja (portrayed by Pankaj Kapoor) and the corrupt Municipal Commissioner D'Mello (portrayed by Satish Shah). Khabardar newspaper used to deal with Super Photo Studio prior to giiving assignments to Beauty Photo Studio but Ashok and Neena are Tarneja's team and they curb all the evidence that the newspaper want to gather. Hence the assignment goes to Beauty Photo Studio.

The duo start their investigation and identify a third partner in the crime, another builder Ahuja (portrayed by Om Puri). Along-side they also participate in a photography contest for a prize money of Rs. 5000. In the process they capture Tarneja killing someone. Now the movie continues with how the duo Vinod and Sudhir try to identify the one who was murdered, make every effort to collect evidence and in the process expose the three corrupt men along with their goons and henchemen / women.

Although the movie was not a successful one upon its release, the movie was made when all of these characters were either beginning their careers or have set one foot into the door of Indian film world. That may be perhaps they have given their best. The timing of the comedy is impeccable with hilarious dialogues. Every scene is memorable making this movie a cult classic. There are certain scenes that really hit you in the pit of the stomach giving you a slap of the reality. Yet the reality has not changed a bit in 33 years in fact it increased ten fold.
Spoiler Alerts:

1) Anupam Kher has given the voice-over for the architect in the construction scene at the beginning of the movie. (The Guy on the left in this scene) 2) On November 2, 2012, this movie was re-released in select theaters in digitally-restored format.
3) Vidhu Vinod Chopra plays the role of Dushasana in the Mahabaratha scene that comes towards the climax. (The guy on the left in this scene) 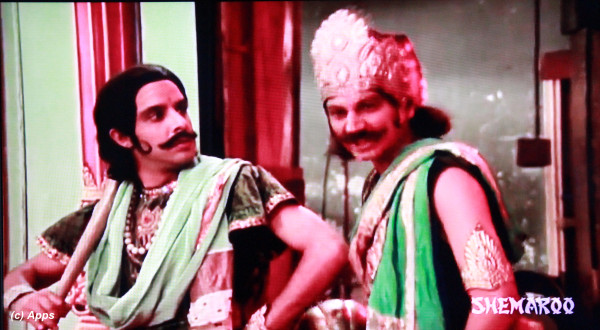 4) Vidhu Vinod Chopra also plays the role of a photographer among the interviewers in the press conference that Tarneja holds. (The guy on the left again) 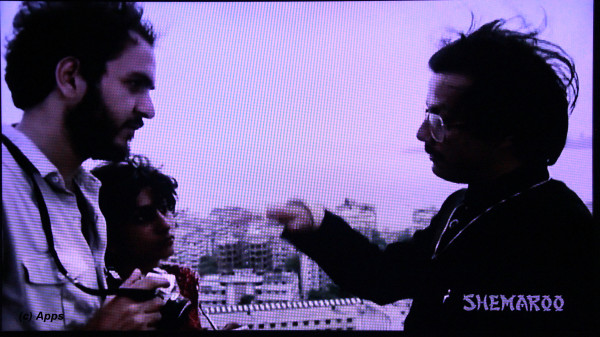 5) There is a scene in the movie where both Vinod and Ashok are in the same room and talk to each on the phones unknowing that the other one is in the same room just behind him. Such an nonsensical and insane scene that one forgets the missing logic behind it and foolishness it is filled with. 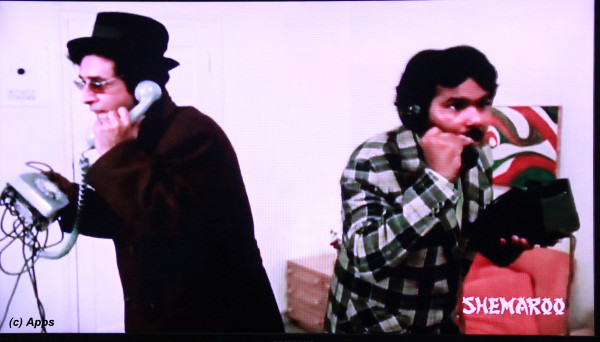 6) In one of the scenes where Ahuja and Tarneja meet to make business negotiations, Vinod and Sudhir enter the room as bodyguards of Ahuja. When Ashok has doubts on them, Vinod gives the password as "Albert Pinto Ko Gussa Kyun Aata Hai?" - another 1980 Hindi film that starred Naseeruddin Shah who played the role of Vinod Chopra in this movie. I believe I had seen this 1980 film but worth watching again. Another post for my blogs. :) 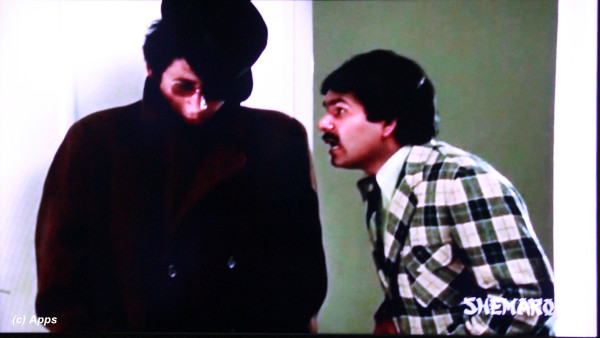 7) Blow-Up, a 1966 English-language film directed by Michelangelo Antonioni in which a photographer believes he may have witnessed a murder and unwittingly takes photographs of the killing, was an inspiration for Jaane Bhi Do Yaaro. The filmmakers paid homage by naming the park in which the murder occurs as "Antonioni Park". Another movie to watch and post for my blog.
8) The names of the lead characters – Vinod Chopra and Sudhir Mishra – came from film directors Vidhu Vinod Chopra and Sudhir Mishra, who were assisting Kundan Shah in the movie. Sudhir Mishra co-wrote the script and assisted in directing the movie, while Vidhu Vinod Chopra was the production controller of the film.
9) It was very interesting to see the news reader from that era on screen. I used to remember her always on the screen when national news aired on Doordarshan - the only TV Channel at that time. 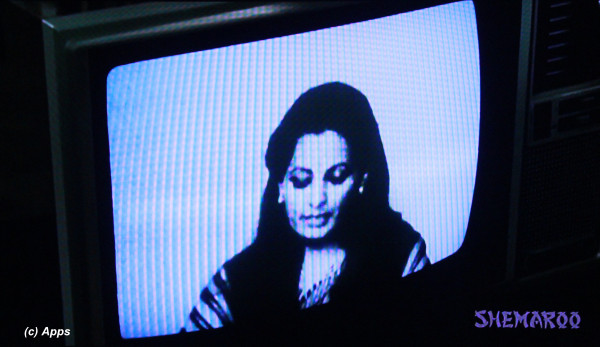 10) Hum Honge Kaamyab - a famous patriotic song goes on through the movie in the background - the only musical score from the film. This was the literal transition of this protest song from African-American Civil Rights Movement of the 1960s. This was / is still famous song sung in particularly in schools. Here is the video of the song from the movie and the original version too.
From the movie: