Bay of Sighs is the second book in the series The Guardians Trilogy by Nora Roberts published in June of 2016. I had written about the first part, Star of Fortune, earlier this year (Check my review here (http://inspirethoughts.livejournal.com/538510.html)) and had mentioned that it felt like a merge of Stars of Mithra and Circle Trilogy series - both these written by Nora herself. Although not as strong as those series, this is still a good one. Nora's style of writing, her essence is coming back with this episode in the series. Yet, waiting for her to completely bounce back to her previous self. 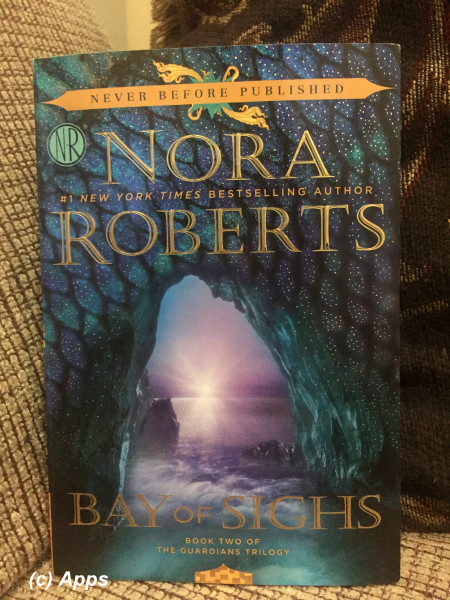 Three goddesses of moon create three stars, one of fire, one of ice and one of water to celebrate the rise of their new queen. To keep them from the evil goddess, they place them in the sky. But they fall down to unknown places after being cursed by the evil goddess Nerezza, putting the world in danger. Now six people – three women and three men – have to band together, earn trust, experience love, find the stars and fight the evil goddess. They are the Seer – Sasha Riggs; the Sorcerer – Bran Killian, the Werewolf – Dr. Riley Gwin, the immortal – Doyle McCleary, the Time and Space Traveler – Sawyer King and the Mermaid – Annika Waters

Now that the Fire Star had been found and well-hidden by the Six, Nerezza would be coming back at them with double the force and triple the power to stop them from acquiring the second start - The Water Star. They move to Capri - for that's where the compass of the Traveler, Sawyer and the vision of the Seer, Sasha guides them to. Settled in a home - smaller than the villa in Corfu, Greece - the Six prepare for the hunt of Fire Star and the next phase of the battle. Sasha's vision also mentions that this time along Nerezza join hands with a man as dark as her with the same thirst for blood she has and that in between the songs and sighs - of land and sea - they will battle for the next star. Annika seems to be the only one who had heard the songs and sighs while they were traveling through time and space from Corfu to Capri using Sawyer's compass and ability to time travel. What does this mean? Where are these songs and sighs?

Annika Waters, the mermaid, unbeknownst to Sawyer King, had already fallen for him. She had only three turns of moon for her to be part of this quest, before her legs will no longer be hers and the sea would be her home for ever. And she hoped that Sawyer would feel the same towards her at least for one day.

As Sasha had predicted, Nerezza meets with Andre Malmon - a thief, murderer, enforcer, kidnapper and many more and much more darker than Nerezza at time - incites him with the quest for the Stars of Fortune. With Nerezza luring him with the gift of giving all the powers of the six guardians, contract sealed with blood, tied down by her body, Andre had no chance to reject the offer - not that he want to, especially when he had old scores to settle with Riley and Sawyer. But what he doesn’t know is the hidden agenda of Nerezza. Will she achieve her goal using Andre? Or will Andre over power her with his ambition and cruel intentions? Has Nerezza find the right match on her side in the battle against the Guardians - for Andre Malmon is no ordinary killer? He has his own team of mercs that know no bounds when it comes to doing evil things towards humans and animals alike. Can the Guardians fight him?

The love between Sawyer and Annika blooms despite the trials that Nerezza throws at them, despite the fact that Annika is not of this world and that her time is short and above all despite how hard Sawyer had controlled his emotions towards her. Will Annika become an Achilles' heel for Sawyer? Or will he be like Sasha to Bran? As much as Nerezza is growing stronger and gathering a different kind of army, so are the Guardians. Sasha is becoming much stronger at holding off Nerezza in her mind and in some cases even hurting her back. With Doyle's training everyone are getting much more capable at combat fighting. With Bran's magic, Sawyer's intelligence and Riley's network they all are getting equipped with weapons both magic and machinery alike. Annika glues them all together with her sunny and positive attitude. They have come to become a family. Will Nerezza see that as a fault? Will the Guardians use that to their advantage? Where is the second start - Water Star?

Finally the true Nora Roberts flair comes out. No softening of pain or love - all described as they are, raw and much to feel at heart. Although I hurt when I read the chapters that show the cruelty Mormon and his men can induce on a fellow human or living being. Yet, the chapters set a very important stone for finding the Water Star for these six guardians.

An excellent light read, with the old way of her writing. And yes it does still remind me of two other series that Nora Roberts had written in the past – Stars of Mithra and The Circle Trilogy. Mormon's viciousness is so close to the villain in the Stars of Mithra series. While Nerezza reminds me of Lilith from the Circle Trilogy. Despite that looking forward to see the final showdown between the Guardians and Nerezza while finding the Ice Star- the third star.

1) Nora mentions that the stars belong to the queen who rules the Island of Glass. In the Key Trilogy (Read my reviews of those books here), she mentions the Keys belong to the souls of Daughters of Glass. So similar yet so different.
2) Surprisingly a few grammatical errors are seen - "quest" is used instead of "oath" in the third parah last line where Annika is explaining about the oath that mermaids take (pg. 93).
Tags: books, critique by amateur, guardians trilogy, reviews
Subscribe