Stars: 3 / 5
Recommendation: If you like easy read mystery with logic involving brain added with romance.

Naked Heat is the second book in the series of Castle books written by the fictional writer Richard Castle from the TV series Castle (portrayed by Nathan Fillion). The first book, Heat Wave, was an ok read, more so because I was comparing it to the TV Series. So this time along I decided to read the second book purely from subjective perspective. Yet, I did traverse a bit away from the path and into comparative mode once in a while. It's much better written than the first one, and of course coincides with the Season II of the TV Show. 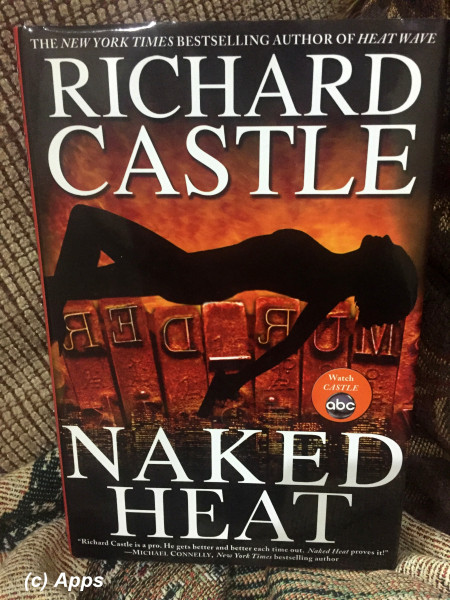 The plot opens with a brutal murder of the gossip columnist and scandal-queen of New York - Cassidy Towne - when NYPD Detective Nikki Heat  and her team Detective Ochoa and Detective Raley arrive at the scene. Who do they find but the magazine journalist Jameson Rook. Nikki is surprised but not shocked to see him at the crime scene though. After his piece "Crime Wave Meets Heat Wave" in First Press magazine she had been recognized everywhere making her famous - much to her irritation. But what bothered her was that the article was supposed to be on her team but ended up being only on her, with her team mates barely mentioned, almost like footnotes. Neither her detective Roach (collectively called so) were pleased too, esp Raley whose nickname Sweet Tea was published in the article.

Despite their dis-interest to have Rook tag-along again, he gets assigned as a ride-along for Nikki Heat and her team - because he was following closely Cassidy Towne for his next piece in First Press magazine. Will Nikki and Rook revamp their relationship that was so short lived during their previous case? Will Rook charm his way not only into Nikki's life but also into the lives of other detectives at her precinct and redeem himself from the column he wrote? In the meanwhile, someone attacks the ME Lauren Parry and Detective Ochoa to steal Cassidy Towne's corpse? Why would anyone want to steal her body unless there was evidence on that implicated them in the murder? As the tug of war between the emotions of Rook and Heat go on, they together form a team again in the hunt for the murderer of Cassidy Towne.  What is murder to do with Esteben Padilla's - the corpse that Detective Heat and her team found a few hours prior to Cassidy Towne's?

During their investigation, Nikki Heat comes across Petar Matics - her ex-boyfriend when she was taking a semester in Venice studying opera production at the Gran Teatro La Fenice. And instantly Jameson Rook feels threatened by the torch Petar still carried for Heat. But are they really in a committed relationship to feel so? They are not really, so why does Rook feel so? What will he do about it?

Several suspects line up in the process - Chester Ludlow (a disgraced politician whose secret BDSM nights were made public by Cassidy), Holly Flanders (the illegitimate daughter of Cassidy and was abandoned by her when Holly was born), Toby Mills (pitcher to the Yankees who had an altercation with Cassidy a few days before her murder), celebrity chef Richmond Vergennes (chef who had a very bitter argument with Cassidy just a week before her murder), Soleil Gray (a washed up rock icon who was making a comeback after her rehab and loss of her ex-lover Reed Wakefield, and had a beef with Cassidy as well) and Derek Snow (the concierge at The Dragonfly that Soleil had frequented).

There is a scene written by the author in this book, that clearly connects to Season II of the Castle TV Show. Jameson Rook comments that if ever an asteroid hits, she should duck and cover inside the claw-foot bath tub she has. In the two-part story, - ran as episode #17 and #18 in the season - Kate Beckett's house gets blown towards the end of the first part - episode titled Tick, Tick, Tick… - and Castle finds her ducked under the toppled bathtub at the opening of the second part - episode titled Boom!.

A well-kinitted plot that includes gossip, murder, paparazzi, stalking and mayhem for Detective Heat and Jameson Rook. Intense plot in many ways showing a deft hand of the writer. Also it was nice to see Jameson Rook elevated to something more than just a jester at one police plaza. This is definitely coming on to those serious mystery categories like Mary Higgins Clark and the likes. However, I still would like to see Nikki Heat's character better. She is the best cop no doubt, but there is a flaw and crack in her personality that bugs me. Perhaps the future books remedy that.

Another good book for those cozy nights.

Spoiler Alerts:
1) Did you know that Stana Katic (who portrayed the role of Detective Kate Beckett in the hit TV series Castle) was in Quantum of Solace. I didn’t know either until I was looking for a picture of Simon Kassianides while posting a review on his Hallmark movie Smooch and found this pic of both of them. She portrayed the role as Corrine Veneau, a Canadian agent and Yusef's latest target in the film. I barely remember her in the movie so cant even remember the scene where she was in the movie at all. Needless to say I was hooked on to Daniel Craig all the time. :P Here is the scene from the movie: 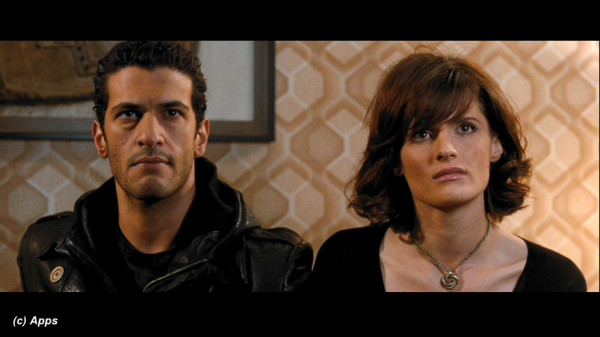 She must have acted in many TV shows and movies in short roles but Castle's Detective Kate Beckett suited her well.

2) Rook's mother Margaret Rook is introduced again in this book. Yet there is no mention of any child or ex-wives for Jameson Rook yet unlike Richard Castle in the TV Show. Perhaps future books might have some reference.
3) The author mentions that there are only three sketch artists remaining in all of NYPD. I wonder if the art of sketching in police line has reduced now that so much use of social media and cctv is involved now.
4) Soleil Gray calls Madonna as Madge- which truly is her nickname when she was in Britain.
5) Rook mentions about Chekhov readings esp about The Lady with the Little Dog. Never read these before. Something read about it in future.
6) Interesting places from NYC mentioned in the book - Mud Coffee (a coffee shop off second - although Wiki calls it as a coffee company that sells in a converted Consolidated Edison step-van known as the Mudtruck. Check for more here), E.A.T. near 80th and Madison, Café Lalo (where You've Got Mail movie was pictured)
Tags: books, castle books, critique by amateur, reviews
Subscribe