Rum & Razors is the third book in the Murder, She Wrote series by Donald Bain and fictional writer Jessica Fletcher based on the popular TV Show of the same name. The book was published in 1995. 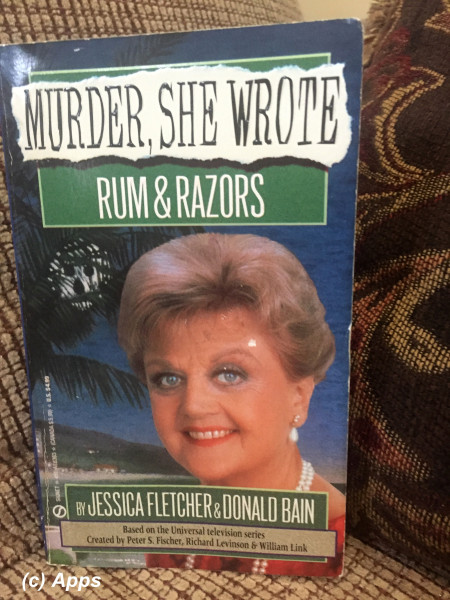 The plot begins with Jessica Fletcher after finishing her latest book is all set for her two weeks' vacation in St. Thomas. After the bout of pneumonia and the hectic schedule to finish her book, she was very much looking forward to this vacation. More for the reason that she would be residing in Lover's Lagoon while at St, Thomas - a place that had been bought and converted to a beautiful and expensive hotel by her friends from Cabot Cove Laurie and Walter Marschalk. All seemed peace and happy when she arrived. However from the minute she met Laurie at the airport, she felt the undercurrents of tension and stress in and around her.

At dinner that night, Walter reveals to Jessica far more details about the problems he has been having with the next door resort, Diamond Reef - the problems go to such an extent as to calling Walter and Laurie to have bought the land illegally by bribing the local Senator Bobby Jensen. He also gets a death threat in mail. Jessica although didn’t want to be involved in any of this sort this time around, she cannot but help to dig a little bit more into what was happening concerning Lover's Lagoon - only because Walter and Laurie have been very good friends with her. True to her fears which though she hadnt voiced out much, she finds Walter at the edge of the lagoon bordering near her villa, with his throat slit open. But, Laurie had told her that they were going to Miami that day and weren't going to be back until next day. So what was Walter doing in St. Thomas? Who killed him? Was the scandal true? Was there a connection between Walter's murder and a murder that had happened prior to Walter buying the place?

Several suspects line up in Jessica's mind - Chris Webb (partner of Laurie and Walter in Lover's Lagoon), Owners of Diamond Reef (The next door resort that was doing everything they can to get Lover's Lagoon reputation down and eventually buy it out), Jacob (a local employed as a gardener at the Lagoon and with a chip on his shoulder), Mark Dobson (general manager of Diamond Reef), Senator Bobby Jensen (friend of Walter who helped him get the land in the first place that became Lover's Lagoon, involved in the scandal around that buy and now resigned and heading to Miami, perhaps for good!), Jennifer Fletcher (Namesake to Jessica with similar initials, but a Ms. instead of a Mrs.), Fred Capehart (a colleague of Jennifer Fletcher, followed her all the way to St. Thomas) and finally Laurie Marschalk herself (she was suing Walter for divorce).

A very strong plot for a simple murder mystery. For once this series doesn't seem as simple as it looks. Another good book for any day of the year.

1) GLOTCOYB - Remember this from the 32nd book in the series, Fatal Feast? (Check my review of the book here) Well, if you havent read that book, then here is a spoiler alert. Jessica receives these anonymous envelopes with these letters cut from magazines and newspapers and of various sizes. At the end of that book, we come to know that it meant "Good Luck On The Completion Of Your Book" and her friends at Cabot Cove had been behind these envelopes. All in good meaning, however. :). Now we know that the author re-used the scene from the 3rd book in his/her 32nd book. Very interesting.
2) Interesting words are seen throughout the book - terra firma (meaning dry land), lais·sez-faire (attitude to let things take their own course), travail (laborious effort), jo-jeezly (a Maine english to be used in negatice context).
3) Few Grammatical errors are seen - Missing "to" in the second line of the third para (Pg. 31)
4) Lover's Lagoon - a special drink that the bus boy (I think that's the name for these people!), Thomas gives to Jessica on the first day she settles in at the hotel. Per his version, it is a combination of dark and light rum, coconut milk, pineapple, kahlua and few other ingredients. I searched online to see if this drink indeed exists. But didn’t find any reference there. ;)
5) Jessica mentions about Candid Microphone to Detective Calid. The was predecessor to Candid Camera and was on radio. (More about it here)
Tags: books, critique by amateur, murder she wrote, reviews
Subscribe