Stars: 5 / 5
Recommendation: A perfect book for opening the world of a child to fantasy and fiction.

My littlest nephew, Riaan, was born on July 3rd of this year - the day this post was supposed to be posted. What better way to welcome him to this world than with this beautiful book written by A. A. Milne and published in 1926. I would like him to grow up knowing all about this Hundred Acre Wood and get some real life-lessons from these pages - for there is always a lesson where Pooh and his friends are concerned. I do hope when he grows and reads this post, he would appreciate that I picked this book for him. 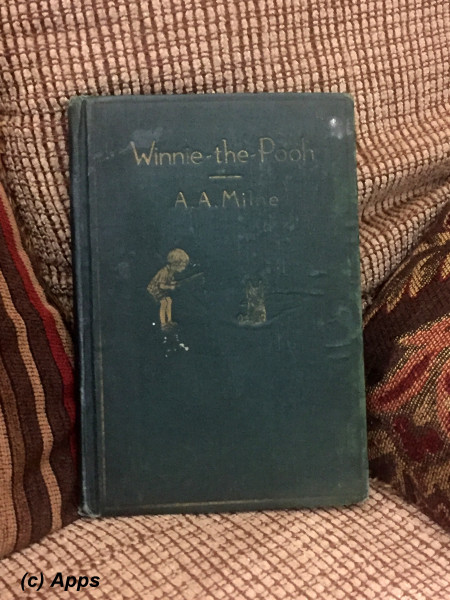 I did already post one Winnie-The-Pooh movie for Easter in my reviews this year (Check it here). Yet I still picked the first book for my nephew. Cant stop loving him or this silly bear. :)

This was the first book in the series of stories involving Winnie the Pooh and his friends. They were adapted from a collection of stories Milne had penned and published originally Punch Magazine, St. Nicholas Magazine, Vanity Fair and others before being published as a complete book. That is the reason perhaps the chapters in this book can be read as stand-alone and the plots don’t continue to the next chapter. There is a very interesting introduction in this book - about how Winnie-the-Pooh came about with this name. Definitely not to be missed.

Christopher Robin in the book calls Winnie-the-Pooh as Winnie-ther-Pooh and the author doesn’t give an explanation. I wonder what "ther" meant here in the context. The author has put in little poems here and there in the book that are very cute to hum. One in particular caught my eye and ear - Cottleston Pie. Here are the verses. Aren't they cute.

The whole writing style is so unique - with chapter titles mentioned as "In Which…." giving the summary of what the reader could see in the chapter. An illustration of The Hundred Acre Woods is seen in the book that spreads across the front hard cover and the first page (although my book has a sticker of Owl pasted across the first page with the name Katharine Truman Smith printed below and a "Er Sibris" under the owl - perhaps the name of the person this book originally had belonged to). 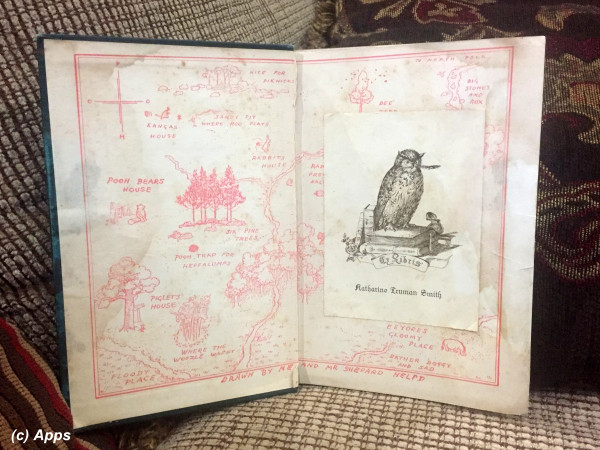 All illustrations in the book were done by Ernest H. Shepard and quite well they depict the story - characters almost come alive.

The format of the first chapter and some of the other chapters is that of a story-teller - written in the story-teller's view point, but here A. A. Milne is telling the story to his son and Edward Bear that his son calls as Winnie - the - Pooh and putting them as the characters in the plot. He also used the Sentence Case for many sentences and made the first letter upper case for many words - keeping it close to how a child would write a script perhaps. Interesting way though.

The book introduces all the characters as Pooh marches down the Hundred Acre Woods - Winnie-the-Pooh to begin with, Piglet (a Pig) (aka Henry Pootel in on chapter. :P), Rabbit, Eeyore (old grey donkey), Owl, Kanga and Baby Roo. Oh what fun it was to get to know them, be part of their adventures and live in Hundred Acres Wood - even if it was just for the time I read this book.

A beautiful book for every kid and every child in you. Teaching some much needed life's lessons about friendship, helping, living in harmony and much more; this book certainly leaves its mark in everyone's heart who reads it.

And now my littlest nephew who arrived into this world with all cheer and pomp. Spoiler Alerts:
1. There is a sequel to this book titled The House at Pooh Corner and was published in 1928. Hadnt heard about it before so never looked for the book. Another one to add to my collection and posts.
2. Surprisingly enough the bouncy toy-tiger Tigger doesn’t appear in this first book. He is seen in the sequel. All along I assumed he was part of the first book.
3. Two other books as sequels were published to this series post-Milne time - Return to The Hundred Acre Wood written by David Benedictus and published in 2009; The Best Bear in All The World written by Paul Bright, Jeanne Willis, Kate Saunders and Brian Sibley and scheduled to release in October of 2016. Some more additions to my collections and posts, I say.
4. Interesting that Pooh was the name of a swan that A. A. Milne and his son Christopher Robin had named and Winnie was the name of a female Polar Bear in London Zoo that they ahd frequented. Quite a story it is.
5. Interesting language all through the book - Towel-horse (Rabbit used this to describe a rod to hang towels similar to a towel rack), Sustaining Book (perhaps meaning a comforting book), Woozle and Wizzle  (imaginary characters), Heffalump (ficitonal elephant), Expotition (something meaning expedition per the context),
Tags: birthdays, books, celebrations, critique by amateur, reviews
Subscribe