Stars: 3.5 / 5
Recommendation: A new twist mixing Science and Magic giving the plot an easy read at the same time. Go for it for those sunny days.

This is the third book in the Newton's Laws series published in May of 2016 by Rebecca Schwartz. The second book was a little less enthusiastic than the first considering not a lot happened with the dragons that Rachel Simons finds in the basement, although there was that incident of loss of power to bend physics for Justin Brogstrom and Dr. Peter Parker. I am hoping that was a platform being set for the grand finale in the third book. 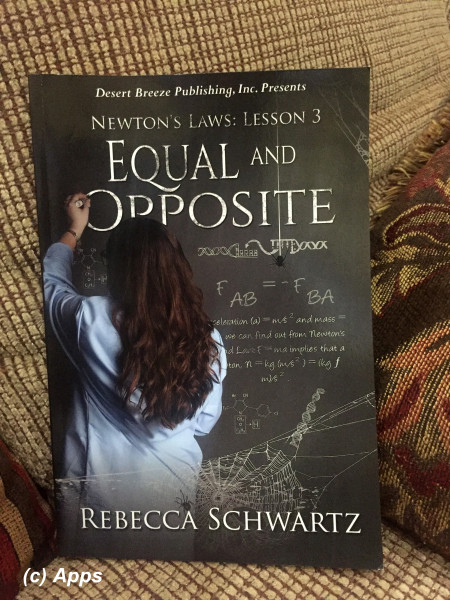 Rachel is out in the world experiencing her adulthood, working for Dr. Jessica Parker - wife of Peter Parker, fulltime physics professor and has ability to bend physics aka magic - after completing her graduation 6 months ago. Just before college completed, Jessica had finally succumbed to Justin Borgstrom's  pursuit and now she has a sort-of boyfriend with super powers. However the walk in adulthood doesn’t start off smooth. First someone releases a pathogen called tularemia into the lab where Rachel is working.  Next the CDC and hazmat team arrived at the hospital even though Vermont isnt known for its virulent tularemia rates and that CDC shouldn’t be responding to an isolated incident in an isolated location. And then both Justin and Rachel get eviction notices from their dorm rooms. With little time to hunt and a solution to be roommates with Dinah - another superhero similar to Justin - makes Rachel feel skeptical while Justin jumps to grab it. But why is Rachel apprehensive about Justin? Why is she holding back?

Now Dante - Rachel's boss in her writing department - is similar to Justin and Peter, and for some reason is targeting Justin. And Pam - Justin's boss - is suddenly interested in what Rachel is doing and would like a exome sequence analyzed although Rachel suspects that she has no clue what she is asking for. So does Justin supsect about Pam - that she could be another plant. While Jessica is facing her own share of problems with her six- year old daughter Meredith - who is every bit like Justin and Peter only that her abilities are to make people bend against their own will. Former government agent Kurt who had caused trouble to Justin and Rachel while working with Weird Eddy previous term (story told in book 2 - post link to review here) ends up being baby sitter for Meredith now - but creates a huge question mark in Rachel's brain. Is Kurt really on their side now? Justin's sister Krystal comes to the shelter of Jessica and Peter in the hopes that they can help her in turning off her super powers - apparently she can teleport over distance and time?

There is so much going on around Rachel that she has no clue what connects to what and being inquisitive she gets deeper and deeper into it as days go by. What exactly is happening in the hospital? What are the other things that Justin and Krystal keep bringing up, that Jessica doesn’t discuss? Where is all this confusing chaos leading to? In midst of these the types of superhero powers and the people having them are also increasing in numbers - slowly making me feel like I am in an X-Men movie.

I liked the fact that the author brings up the sexual harassment issue that is seen more than often in many countries and many companies - be it corporate or government or private. (Thankfully I hadnt had to be on either end of that harassment any time in my career!!).  This is an issue that is so often ignored.

Romance had fluttered between Rachel and Justin right before they finished their graduation. However I fail to see the romance between them through the author's eyes. They are so plain about it. I wonder why the author had not elevated it a bit further. Rachel seems to be more cautious about expanding her relationship with Justin as always, but this time around she sounds rude at times. May be I am expecting her to fall in love and be romantic like any girl in love. But, the author is portraying her very practical and grounded. And when is Justin going to grow up and become an adult if he wants to date Rachel as more than just casual. I would like to see Justin more open and try not be like the person who needs a hammer to extract information as small as a nail.

All in all a much better book in the series that could bring Physics into normal man's terms.

Spoiler Alerts:
1) Justin's DNA was stolen in book II. Yet to figure out what happened to his DNA. Curious about that.
2) Justin has some kind of closure with his ex- Isaac - it shows a rather childish portrayal of a hero by the author when the hero doesn’t man-up for many things. For instance, why not get it out and let Rachel know about it? Because he is a male species and don’t share? It’s a bit confusing with the character portrayal of Justin.
3) Again there is reference to Doctor Who. I got to watch this series now.
4) Reference to Schrödinger's Cat is given in this book. I was not aware of what it was so I had to look up. Interesting thought experiment by Erwin Schrodinger (More here)
5) The author mentions about a James Bond movie where there is no Bond Girl in it. But I fail to remember any such movie. Although Skyfall could be considered. Perhaps that is what she is talking about.
6) Sue Storm and Reed Richards from Fantastic Four are also mentioned. All this reading is craving me to watch the Marvel movies again.
7) Grammatical Errors: a few seen through the book - a missing "to" in the third para last line that starts with "Meredith…" (pg 107).
Tags: books, critique by amateur, reviews
Subscribe