Black Coffee is the first play written by the famous British crime-novelist Agatha Christie and was produced in 1930. She wrote this play after she was disappointed of the portrayal of Hercule Poirot - her favorite detective - in the 1928 play Alibi and the film adaptations of her short story The Mysterious Mr. Quin and her 1922 novel The Secret Adversary. However, twenty-two years after Agatha Christie's death, with the endorsement of Christie's estate, Australian-born writer and opera critic Charles Osborne novelized the play in 1998. Although the play was the least successful works of Agatha Christie, the novelization however became were successful for Charles Osborne. The plot for this mystery is set after Poirot solves The Big Four - one of the most complicated and amazing mystery by Christie. 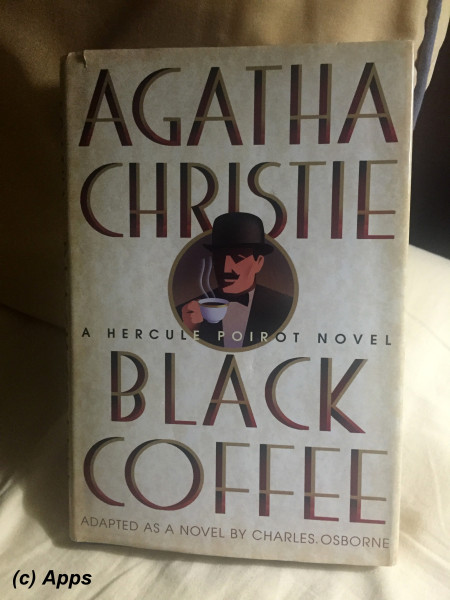 After solving The Big Four, Poirot had retired while Captain Hastings went back to Argentine to his wife and his ranch. Although retired and relaxed, Poirot was but anything. He was itching for something exciting to come across him to solve instead of just whiling away time in sun-basking or constitutional to the park or lunch at Soho. Just as he was getting irritated by boredom, he receives a call from Sir Claud Amory asking him to come to his home in Surrey to take the secret formula of bombarding an atom. Sir Claud Amory is a famous scientist who is currently working on a formula to bombard an atom - which he calls as Amorite. However his fear was that someone from his household is trying to steal it. So he tasked Poirot to come to Surrey for the weekend and return back to London with the formula and hand it over to the Ministry of Defense. Seems like a simple tasks for Poirot, plus a travel to Surrey and meeting the famous scientist appealed to him much more than the formula itself. Well, was it a simple task?

Sir Claud Amory's household includes his son Richard Amory and his wife Lucia, his niece Barbara Amory, house-guest Dr. Carelli - an Italian just like Richard's wife Lucie - his sister Caroline Amory who runs the household, his secretary Edward Raynor and his trusted butler Tredwell. However, on the evening of Piorot's arrival, Sir Claud Amory cleverly has all of the residents in the house- including him - locked in The Library while they wait the arrival of Poirot. In that few moments, Sir Claud explains to everyone the real reason for them being locked and why Poirot is coming - what he had feared the most had come true, someone had stolen the formula from his safe right before dinner and that someone is still in that room. He does mention that a minute before Poirot enters the room, the room will be darkened and if that person can place the formula on his table, Poirot's services will not be required. Just as he explains, the lights go off, some commotion arises and next when the lights are on, the doors are unlocked and Poirot enters the room along with Captain Hastings. Only to find Sir Claud still as a stone sitting on the chair and very very dead.

Who has killed Sir Claud? Who had originally stolen the formula and then replaced it back again? How are Dr. Carelli and Lucia related from their past? What is Lucia afraid of? What is it that Dr. Carelli coveted? What is Lucia's past that she has been running from and still planning to run? Poirot and Hastings have their hands full with the murderer and the thief - both may be same or different persons - sitting in the same room as others. Barbara Amory has curious disposition about herself and her attitude towards the death of her uncle. One would think she might be an obvious murderer if not at least a thief. And Dr. Carelli comes to mind too. However, Poirot's grey cells steer him in the direction where normal people like us wouldn’t imagine to go.

Inspector Japp from Scotland Yard gets called to the scene to investigate and there is such a lovely scene of him reminiscing of their past cases together - Japp and Poirot I mean. Having always heard British people address their queen as "Her Majesty", it was a startle to read "His Majesty" in the book (Pg 6 - Poirot refers to of a conversation that he had had with a member of His Majesty's government). Considering the time this play was originally written (1929-30), am guessing Poirot was referring to King Edward III who was abdicated some six years after - which of course is for another post about history, if I ever write. :) The brand of lipstick that Barbara uses is called as "kissproof" - how appropriate. ;)

The original play was written in three acts - primarily focusing the entire setting in one room The Library in Sir Claud's home. However one can imagine that the Study and Dining Room of that home as well as a portion of Poirot's home might have been used for the play. The novel also is written in the same fashion. I understand now why the play was not as successful as her books were. All the elements of mystery, suspense and thrill that you see in any Christie's novel is seen here too. But what lacks is the chase and the chill. Perhaps that might have caused for the play to fail. But the book however seemed to be successful. I liked it enough to read though.

Very easy and quick read that hardly takes away much of one's time. Yet, keeps you on the edge to identify the killer.

Spoiler Alerts:
1. I had not read any of the two books that she wrote that I mentioned in my review above - The Mysterious Mr. Quin and her 1922 novel The Secret Adversary. Another addition to my list of books to read. :)
2. The 1928 Alibi definitely I would be unable to see now since it is not 1928 now. ;) However, if I get a chance I would love to read the script that was printed for the actors back then - if I get hold my hands sometime.
3. Although the 1931 film Alibi based on the play will be a definite thing that I can watch even now, thanks to Youtubes and other media sites. :). Alibi was the first screen version of Christie's famous story The Murder of Roger Ackroyd.
4. The play Black Coffee was also adapted into a film a year after it premiered. It was released on August 19, 1931. If I find it, I am lucky to watch another of her film adaptations.
5. Barbara Amory - niece for Sir Cloud Amory - mentions about a cocktail called Satan's Whiskers - made of equal parts of Brandy and Crème de Menthe with a shake of Red Pepper. And indeed there is one such cocktail made even today.
6. The Borgias are referred to several times in the book - made me intriguing enough to find out about them. Boy! Their escapades could be made into volumes of books by any good author that would last quite  few lifetimes.
7. Inspector Japp mentions a few cases that he had worked with Poirot - The Abercrombie Forgery Case (unrecorded as a book by Christie anywhere but just gets mentioned time and again in her novels), The Baron Altara case (another unrecorded case as a book anywhere by Christie), The Mysterious Affairs at Styles and The adventures of the Italian Nobleman.
a. And later in the book, Poirot reminisces about the case Lord Edgware Dies.
b. Few more books of Poirot for me to read, although I have seen the dramatized versions of them.
Tags: agatha christie, books, critique by amateur, reviews
Subscribe