Red Lily is the third installment in the In The Garden Trilogy written by Nora Roberts and published in December of 2005. This is the story of Hayley Phillips and Harper Ashby with the sub-plots continuing from the first two books. Because I did not have a warm feeling towards the character Haley, this was a tough book to review. Hard to keep myself objective when the focus always shifts. Hopefully you will find my review unbiased. 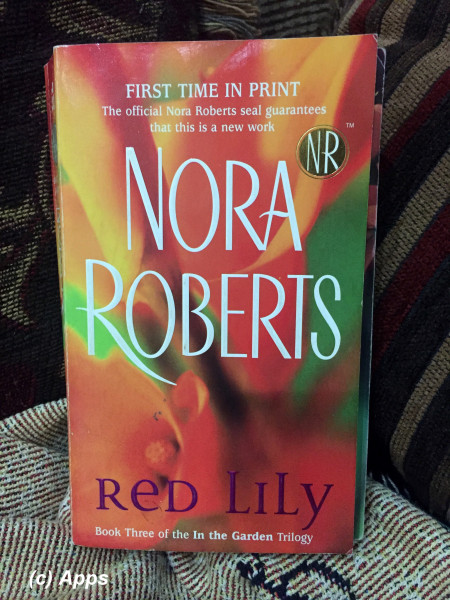 Just like the previous two books, this one too opens in the late 1800s, specifically to January of 1893 - approx a year after the first book's prologue was set. Amelia Connor is seen to reach the Harper House - destitute, desperate and demented. What Reginald Harper had done to her was cruel and harsh - the betrayal, the loss and the hurt. But the calculated Amelia wasn’t completely innocent either. So, she implores to the mistress of the house and is turned away instead with threats and bitter words. Demented as she had become, she plots to do the most unthinkable to acquire what she has lost.

The story then fast-forwards to July 2005 in the Harper House in present times. Haley Phillips had arrived at the very same door-steps 18 months ago ripe with pregnancy and looking for a job. She not only found a job, but friends and a home - Stella Rothchild (Manager of In The Garden Nursery), Rosalind "Roz" Harper (owner of The In The Garden Mystery and the famed Harper House), David Wentworth (lives in Harper House, friend of Roz and takes care of the house), Logan Kitridge (married to Stella and her sons, works with Roz and leads the landscaping side of her business), Harper Ashby (Roz's oldest son, part-owner of In The Garden Nursery), Gavin and Luke (Stella's kids from her first husband), Dr. Mitchell Carnegie (a writer and professor, expert on genealogy and married to Roz). She has a sweet little baby, Lily Rose Star, who is doted on by everyone and taken care of - especially by Harper.

And that is where the problem started for Hayley. She very much was in friends with Harper and has a feeling of thanks towards him. Yet her feelings are changing into something more than friendship, something involving a lot of lips, hands and body. Two things though - one, he was the son of Roz, her manager and the one who had provided her with food, shelter and job; second, she wasn’t sure if Harper had the same feelings towards her, although he loves Lily like his own. Will she act on her feelings and find out if they are reciprocated? Of course, we know that Harper has feelings for her too. Will he accept her and Lily into his heart and life?

While she is struggling with her feelings towards Harper, Amelia is instilling all kinds of cruel thoughts in her mind and goes to an extent of taking over her body. Will Hayley fight her off? Will Amelia take over her body and soul completely? What has caused Amelia to become so strong now when for more than 100 years she hadnt hurt anyone? And why target Hayley to such extreme measures when she barely scratched Stella and even though had hurt Roz she had come to her aid? But the dreams are returning for Roz and Stella to. Why? What is the end goal for Amelia?

The sub-plots that continue involving Stella and Logan, Mitchell's genealogy and attempts to find what happened to Amelia and both couples' post-marital blisses; are blended in well by Nora. There is a chill that comes up your spine whenever one reads the chapters involving Amelia - so chill that one literally would shake. Well written series and equally well concluded in this final episode answering all questions and finally resting Amelia in peace. If you get a chance to read it, enjoy it despite the chills

Spoiler Alerts:
1) The concept of ghosts taking over human bodies is shown in this book. It gave me creeps while reading and I wonder if Nora was affected similarly while writing.
2) Hayley becomes pregnant with Harper. Just like she calls herself as a magnet to sperms, it made me think in the beginning why Nora made her pregnant again. It's like she is just a breeding person here. Although my thoughts were answered in the following chapters, I couldn’t shake the feeling.
Tags: books, critique by amateur, in the garden trilogy, reviews
Subscribe