June 20th marks Summer Solstice this year. And to mark the onset of Summer I picked the In The Garden Trilogy by Nora Roberts.  I was intending to post this day's post on the day it was destined to but I am way behind in my posts, sadly. Summer is on the corner at this time for the date of this post and this trilogy is a perfect complement for that wait of warm sun and happy breezes.

Blue Dahlia is the first book in In The Garden Trilogy by Nora Roberts and published in November of 2004. This is one of the series that Nora Roberts had written pretty close to vintage Nora type and that had no yet touched the flair that she shows in recent books. I liked this series in particular for the portrayal of three strong women who come from different background and life-style but find what they need in one place along with three strong men who stand by them and love them. 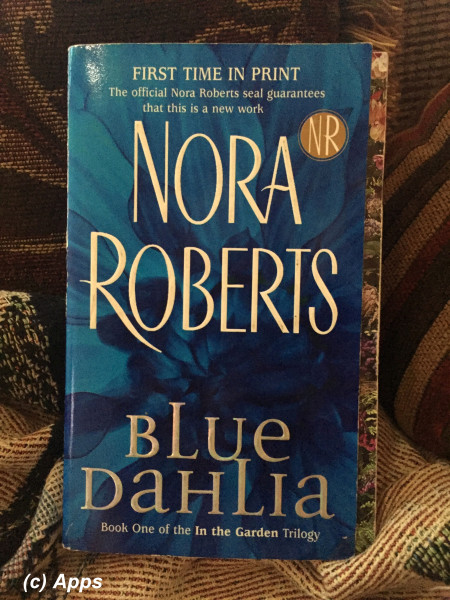 The book opens with a prologue describing the life of one Amelia Ellen Conner in 1892 - mistress to Reginald Harper - and how she faces the biggest disappointment and betrayal in her life. Then the plot fast forwards to 2001 into the life of Stella Rothchild who had moved from Southfield, MI to Harper House in Southern Tennessee. She had been fighting her own demons after losing her husband, Kevin, to a freak flight accident with two growing sons - Gavin and Luke. Now as the Manager to the In The Garden Nursery, she found new challenge to her life, a new path giving her the lost hope and trying to fill a little of the void left behind from the loss of the life she had envisioned with Kevin.

As the new manager Stella faces ups and downs but her biggest hurdle comes with the name Logan Kitridge. Despite her efforts to make the nursery a success and give a new face lift, butt heading with Logan may cause to have her budding relationship with Roz threatened. Stella was determined to stay in her hometown and be part of In The Garden nursery. Now she just have to keep butting her head and Logan has to learn to take a step back. Will Logan do that? Will Stella find herself again?

Logan comes with his own past that sometimes clouds his present. Where does this buttheading with the cute redhead lead to for Logan? Despite the initial confrontation that she faces, Stella gives into Logan's charm and her attraction towards him. And they both start acting on it. So why is the resident ghost being antagonistic towards them. As far as Roz's knowledge goes nothing ever of such kind has the ghost done in past years.

Why is she targeting Stella and Logan? Who is she? What is the reason for her to still haunt the Harper House? To know her and understand her, the Harper House residents gather to look at the Harper history books, journals, births and records to identify her. Roz hires Dr. Mitch to do a genealogy on her family and identify the ghost. Will they be able to identify who she was? And why she has been haunting for so many decades? In all this hoopla, Hayley gives birth to a baby girl and names her Lily Rose Star. Will the ghost harm or protect Lily Rose?

The plot in this series introduces most of the main characters that we will be seeing as the series proceeds - Stella Rothchild (Manager of In The Garden Nursery), Rosalind "Roz" Harper (owner of The In The Garden Mystery and the famed Harper House), David Wentworth (lives in Harper House, friend of Roz and takes care of the house), Logan Kitridge (works with Roz and leads the landscaping side of her business), Harper Ashby (Roz's oldest son), Hayley Phillips (in a long-winding way cousin to Roz, works for Roz and is very pregnant), Gavin and Luke (Stella's kids from her first husband), Dr. Mitchell Carnegie (a writer and professor, expert on genealogy) and the resident ghost Harper Bride - yet to be discovered as to who and why she has been haunting Harper House for decades.

Although the book had passed from 1892 to2001 in one chapter, the story moved slow since then until mid-way through the book when the drama with love, legends and mystery unfolded. It carried more interest there after making me not wanting to put the book down. There is heavy usage of garden terminology and life relating to gardening is depicted by Nora that it bordered on being a Home and Garden book. However, the resident ghost took away that feel and brought back Nora's flair into it. All the characters are portrayed strong and able. And not to forget the comic book references that Logan and Stella's kids keep making - oh that took me back to so many lanes in my memory book. :P However I got ticked off at Hayley's character. Often times she comes off as impatient, ungrateful and bitchy when all the residents of Harper House have gone above and beyond to help her and make her comfortable. She is sweet and smart most times, but there are pockets of her nature that don’t gel well with a reader's mind.

Another book with Nora's stamp in her theme and plotting of characters with an added element of supernatural in it. Very interesting read that definitely keeps you awake a little in the night. :) I hope you all will enjoy it as much as I did when I read it.

Spoiler Alerts:
1. Harper, oldest son of Roz, faces love at first sight the minute he sees Hayley. But Hayley is pregnant, 6 months far. It would be curious to see how their story unfolds.
2. Roz's second husband and a very much ex- gets introduced in this plot. We have to wait and see what will Bryce Clerk bring in to Roz and characters.
3. Stella's kids play Wiffle Ball - a game I heard for the first time. Googling on it, it looked similar to baseball.
4. There is distinct attraction towards Roz for Dr. Mitch. Curious to see which couple does Nora pick up for the second book in the trilogy.
Tags: books, critique by amateur, in the garden trilogy, reviews
Subscribe