This is the second book in the Newton's Laws series published in May of 2015 by Rebecca Schwartz. After reading the first one, even though it had a few bumps here and there , I was curious to see how the journey of Rachel continues before she gets into the world on her own. Here is my take on the book. 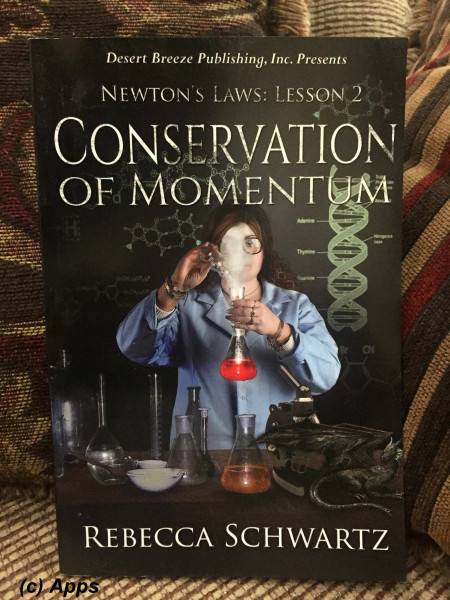 Rachel Simons is back at her school for her final semester after break earlier than others to settle herself down - only to run into Justin Borgstrom. Justin had been interested in her in way more than needed, especially after she figured out that he and Dr. Peter Parker - fulltime physics professor - along with a few others are superheroes - ability to bend physics and break all kinds of laws related to physics. And he wants her to take a second term of Physics, baiting her that it would be needed for her intern job at  Jessica's lab - Jessica is wife of Peter. She wanted to have a peaceful final semester before she gets into the wide world, but with Justin around will there be any moment of peace for her? It didn’t look like that.

After a sitting with her advisor, to accommodate for the internship, she signs up a change of course that will help her in getting the job, only to realize she had signed up for a course that Justin was TAing in. So much for avoiding him. Her internship was one thing that she was so much looking forward to since it involved looking at genes of super humans - Justin and Peter. And with the experiences she had the previous year she was very curious on how Justin and Peter could bend Physics and create magic. But not necessarily interested in Justin or take a Physics class again. But why is Justin warning her off about Jessica's lab? Why does he want her not to go there? But again Peter want her to investigate what's really happening in Jessica's lab? Who is stealing their research? Conflicting requests from both yet Rachel goes about what she wants to do - being curious.

Two weeks into her internship at Jessica's Lab, Rachel runs into Weird Eddy - a Director of Oncology who is just given that title but allowed only to do blood analysis like a phlebotomist - holding  a rabbit, murmuring with cages around him. Unsure of what it was she reports that to Peter. And, later they notice that Peter lost his super-hero touch and the physics-bending stuff. And so did Justin. What is going on? How is that even possible? Is it have to do with whatever was going off at Jessica's Lab? In the meanwhile, Justin walks into Isaac at the hospital where Jessica's Lab is. Isaac is working as a construction guy repairing something in the hospital and used to date Justin.

After doing their own snooping on Weird Eddy, Justin and Rachel find genetic engineered dinosaur - dragon monitor lizards in the basement where Eddy was murmuring a few days ago. Granted that these may have not caused the temporary loss of their super-powers, why is Eddy creating these? Who has asked him to do this? What is their end goal? As all this is going on, Justin and Melissa - Rachel's roommate - bond together and have weird looks to each other that Rachel is confused if they have a secret now that they are hiding from her or if the looks are because of her. What is going on between both of them? Thus the plot continues intertwining with the lives of Justin, Rachel and the rest of the characters.

There are some inconsistencies in portrayal of Rachel's character. At one point the author mentions that Rachel feels that she is running behind Jessica as she is walking fast her being tall and Jessica running to catch up being short (Chapter 3). At the same time in the chapter that follows this incident she comments that Rachel has a fast gait so even though Justin has long steps they walk at same pace. Both are contradicting with each other. References to Lando from Star Wars and Latin American spirit of metal work, Ogun made me wonder where this book was going on at the beginning - changing from the science side of magic into fantasy magic with fictional science?

Also it's still confusing about Justin's character - is he gay? Bisexual? Or simply playing with Rachel's heart for a different motive? Also he frustrates me a lot. Come on, you are a superhero so be a man and behave like one. Instead more than often he is like a 6 year old sulking at not being given some candy or a toy. I hope Rebecca will improve her characterization of him in the next book. And Rachel complaining about her senior year being very stressful - the usage of the word stressful - is very repetitive bordering on becoming boring.

What I liked about the book was the way author Rebecca has stripped down the human emotions and activities into their basic rawness. For instance, there is no flim-flam in the romance part, albeit it is only on Justin's side for now. The scene where Justin drools over Rachel's shoulder in sleep is not very romantic and causes you to go "Eew". Yet, she has kept it as is instead of masking it with some romantic interlude keeping the story more real than fantasy. Also the scene where Rachel and Justin are in a supply closet and she describes Rachel feeling her eyes sting because Justin was smelling due to him not having shower since a week and using more than required cologne.

The whole sharing of looks between Jessica, Peter, Justin, Melissa and other superheroes also confused me cause it never ends. I wish at one point that looks translate to words. A lot of my sympathies to Rachel for being in between something she doesn’t want to be and not being explained to her by others a whole lot. The author also combines the real-world fears of Rachel with the scientific / magical issues she is facing into a smooth blend. The language used is much better than her first book, but there have been instances where the words have been magnanimous. ;) For instance - verisimilitude on pg 76. And new words like Superheroing on Pg 74 - doesn’t have any real meaning other than what the character Rachel explains in the book, never know if this will eventually become a real word in future.

All in all another easy and quick read with enough entertainment to not bore you. Looking forward to finish of the series with the third installment soon.

Spoiler Alerts:
1) A few grammatical errors are seen here and there - Pg 6 (the big para in the center has one error), Pg 22 (6th para that starts with "Peter nods again"), Pg 86 ("gapes" is spelt as "gaps" in the last but third line), Pg 96 ("it" is printed instead of "is" in the last but third line).
2) Reference to Doctor Who (Pg 22) and the Time Lords he visits is so on the spot.
3) It was funny to see a reference to Bruce Campbell (Pg 24) - took me a while to match the name to the face.  Can't forget him as Ash Williams from The Evil Dead which took permanent etch in my brain even though he has acted in so many movies after. Another post for another day about that horror movie that gives me nightmares still.
4) I notice a reference to Daphne and Scooby Doo (Pg 28) and to Marvin Martian (Pg 42). I haven't come across a single book that I have read so far that referenced to these cartoon characters that are a reminiscence from my childhood days. I almost rubbed my hands with glee while reading. :)
5) The author mentions an 1891 novel "Tess of the d'urbervilles" that created quite a stir in that era. Piqued my interest to read it. Perhaps one day I will read it. :)
6) Another superhero comic book is mentioned - Jenny Sparks - which I haven't read in a long time. Time to read it again, perhaps. ;) (Pg 81)
7) And never new Superman had a cousin named Kara Kent (Pg 85). Have to check on that.
8) And Vulcan took me back to Star Trek getting me cravings to watch all of the series again. (Pg 87)
9) Jessica's replacement is a red-haired woman named Pamela, Pam. I am curious to see if she has a bigger role in the next book.
Tags: books, critique by amateur, newtons laws, reviews
Subscribe