My oldest nephew turned six on June 15th of this year, the day this post was originally supposed to be done. (I am way way behind in my schedule). He is a master spinner of tales. Be it as small as getting a pen from a nearby table to as big as going to Lego Land for a day trip, he spins the fun he had there into a beautiful tale. Albeit sometimes he goes over the board, but that is what an active imagination should be like. Makes me wonder if channeled well, he may perhaps one day become a well-known author or screenplay writer. Here's wishing Srithan a very Happy Birthday with the review of this book from the Land of Stories series by Chris Colfer. What better book than this, huh? :) 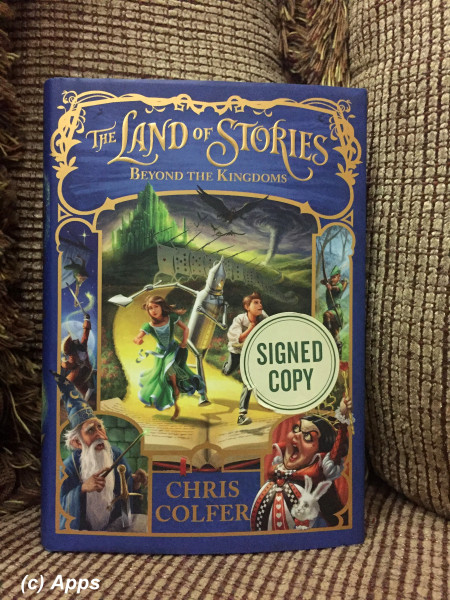 Beyond The Kingdom is the fourth installment in this series that was published in July of 2015. The book opens with a prologue set in 1845 Copenhagen, Denmark. The Fairy Godmother visits Hans Christian Andersen who after a frustrated day of writer's block was lounging at the Langelinie Promenade. An unexpected turn takes their conversation and Fairy Godmother reveals that she has two sons infact - John and Lloyd. The conversation spurs an idea into her brain which Fairy Godmother acts upon. And what she does next is as much an eye opener to her as well as the readers. She not only learns the darkest dream of someone she loved the most but for the readers it answers a lot of questions from the previous book, A Grimm Warning.
The story moves on to the current era where Alex Bailey and Connor Bailey - the twins who managed to open the portal to the fairytale land - are still in Fairytale land. Alex is now the new Fairy Godmother while Connor is aiding her in finding The Masked Man. Alex is convinced that he is her dead father John who miraculously came alive or faked his death. She feels sick to her core whenever she thinks about and no one would believe her if she had mentioned the same.

In the meanwhile somewhere in the fairytale land a group of witches gather to ponder over two dozens of children kidnapped and being blamed for it. The Masked Man - who had escaped the battle in the previous book, stole something really important from the dead Fairy Godmother's room and ran away - arrives in the middle of their conversation. With threats and consoles, he gets the witches on his side - in a war that he want to wage against all the fairy tale land kingdoms as well as the Outerworld, so he can rule them all. In the tussle, The Masked Man faces Alex, Connor, Goldilocks, Jack, Red and Froggy - all of who have been  who had come into the discussion disguised as witches, but escapes with the potion he stole from the Fairy Palace.

Since the time she has seen The Masked Man's face which looked exactly like her father, Alex's emotions and powers have become uncontrollable. In this search of The Masked Man, when she had come so close to catch him and help him - for she wants to help him so he can become as before - Alex loses further more control and comes close to hurting everyone around including her friends. After another of such episode, The Fairy Council finally "un-godmothered" her after a very serious episode. Not only that she was getting out of control but her obsession in finding The Masked Man was becoming more and more hazardous. Will Alex find who The Masked Man is? Will her friends believe in her again? Will The Fairy Council forgive her? Where has The Masked Man escaped to? What is in that blue vial?

In the Outerworld, Alex and Connor's two other friends who had travelled to The Fairy Tale land in the previous book, are facing their own punishments from their parents - grounded for being gone for five months without a note. Emmerich Himmelbasch - living in Bavaria, Germany - has been grounded for how long he doesn’t know and he has the Kitchen Cleaning duty every night as part of the deal. So does the same thing happen to Bree Campbell - in America - has been grounded till she reaches college. However neither of them could forget the amazing adventure they had in those five months with Alex, Connor, their friends and the Fairytale Land. When they get a chance to talk to each other again, Bree shares her theory of how she and Emmerich could be having magic in their blood and because of which they could travel to the Fairytale Land - for if you don’t have magic in your blood, you will get lost in the portal forever. They decide to explore on this idea, but first they need to be able to get out of their homes - again! How are they possessing magic blood? Whom are they related to in Fairytale Land? Bree's constant conflict with The Book Huggers - Mindy, Cindy, Lindy and Wendy - the book club members at her school grates on her nerves and is not lost on the reader on how irritating they can get. Their fixation on Bailey Twins gets very obsessive to the point that they stalk Bree - much to her frustration. Yet, the determination Bree has to find out about herself and to go back Fairytale land took over. Will she and Emmerich go back again?

As for The Masked Man, he has the blue vial that sends him to worlds beyond the Fairytale Land, beyond the Otherworld, into a literary world. What his intentions are in using the potion in the vial are far more crueler than what The Grand Armee had intended to do. Intentions that Morina, the witch, takes part freely in. However, The Masked Man has a secret of his own that he doesn’t share with anyone. And so does Morina - a secret of The Masked Man that he wasn’t even aware of. What are these secrets? Where will this hunt lead The Masked Man and Morina to? Who is The Masked Man? Why is he bent on destroying the Fariytale Land?  To add to the troubles the teens and their friends are facing, Morina forces Froggy to go along with her else would destroy his friends. Why didn’t Froggy object? What did Morina need him for? The Masked Man also upped his ante by kidnapping Tinker Bell. Another hurdle that the Bailey Twins have to solve.

The plot is slightly complicated than other books, complicated for younger kids but not for youth. Chris Colfer has matured the plot well along with the kids growing up in the story. However the plot revolves between Real World, Fairytale World and the Fictional Book World - World of each famous books out there in our real world - causing a bit of spin to one's head.  It get's a bit of reading before one settles into all three worlds. I can't imagine how Chris Colfer has managed to write without mixing them together. :)

Along with the usual friends of Alex and Connor, both in Fairytale Land and Otherworld, we get to see more surprising characters, some allies and some foes - Morina (the witch who had converted Prince Charlie into Froggy and a foe to the Bailey Twins), Trix (the little fairy that Connor had helped in their first adventure to Fairytale Land), Rook (the boy on whom Alex had crush and was crushed by his betrayal, an ally for now since he tried to make amends), Hagetta (The good witch who helps Connor and Alex heal on several occasions when injured), Tin Woodman (Yes, our very own Tin Man from The Wizard Of Oz and ally to the twins),  Peter Pan and The Lost Boys (Tootles, Nibs, Slightly, Curly and the twins), Arthur and Merlin, Robin Hood of Sherwood, Wicked Witch of The West, her Winged Monkeys and Twinkies and finally the The Queen of Hearts.

As usual Red is very obnoxious and borders on making you want to strangle. However, when there was need of help, she comes through. I believe that is the reason why readers tolerate her - at least I did. Froggy is confusedly in love with Red. I feel so much pity for him. And the begging question if Connor can also do magic just like his sister gets finally answered in this episode. All through the book it felt that The Masked Man was gaining advantage on the Bailey Twins and their friends. Towards the end it left each and every character in a world of each of the books that The Masked Man had gone through while he is heading back to Fairytale Land. I was expecting at some point the Twins team to get an upper hand. And suddenly the plot stops without giving a headsup to the reader that there would be a fifth book following this.  It was a rather odd way to finish a book by the author.

Spoiler Alerts:
1. When The Fairy Godmother meets Hans in the beginning of the book, he was stuck on a chapter of his famous book The Story of a Mother. I have to read this some day. Another one for my blog post.
2. The person that Alex had seen towards the end of in the last book, A Grimm Warning, perhaps is not her father but yet related to her.
3. Goldilocks is pregnant in this book - so intriguing to see the young characters of our fairy tales that we know, growing up.
4. Froggy and Red are planning for a wedding - this follows through in the book as a sub-plot.
5. Red keeps calling Shakespeare as Shakyfruit all though the series. I do hope she learns to call him right eventually.
6. In this version of The Wizard Of Oz, Chris plays a scene where field mice help Tin Woodman to take Alex, Connor and their friends from the field of deadly poppies to save them. I don’t remember reading it in the book as well as in the movie. Have to check again.
7. Cinderella's step sisters and step mother who had gone to the Otherworld in the previous book, are shown to be owning and running a diner named "Storybook Grill".
8. Robin Hood is depicted way overly pompous with a loud voice and no heroic quality in him. The author perhaps never liked him for real to make him look so silly.
Tags: books, celebrations, critique by amateur, family, land of stories, reviews
Subscribe