Stars: 3 / 5
Recommendation:  A decent read with enough history and facts blended in to make a tapestry of Grace Sherwood.

On my recent trip to Virginia Beach, VA, my friends and I took a tour of Ferry Plantation House located at 4136 Cheswick Ln, Virginia Beach, VA. The house was originally built in 1830 with addition of the main house in 1850. The reason we had picked this house was because of its link to paranormal activity - something we all wanted to explore, of course during day time only (at least I would be the one to prefer that. :P) More about the house here.

One of the persons who gave us the tour was Danielle Sheets. She was very informed about the history of the home, people who had lived there, their stories, their life and lots of little details from the time the house began its existence. Towards the end of the tour we came across this book in the gift shop housed inside the building. Little did we know that the co-author of this book was the very person who had given us the tour until she told us after she saw our interest in the book. Immediately me and another friend in our group bought the book - not just because it is about witches and history that always creates mystic in one; but also for the fact that we got to spend so much time with a writer albeit a beginner. Also the fact that she was not looming over us and pushing that book at us made me want to buy it more. 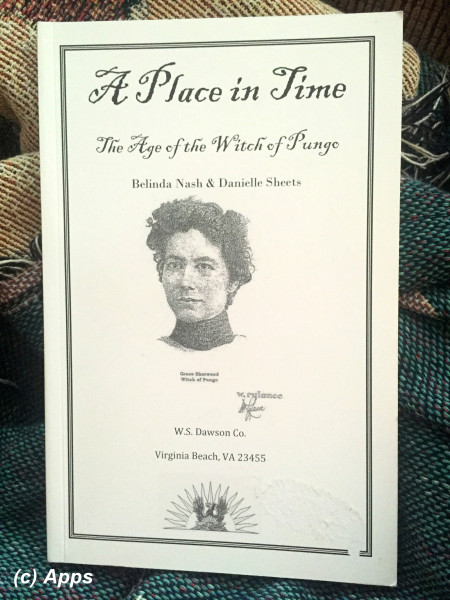 And here is a picture of me with Danielle Sheets I don’t normally read non-fiction, not that I don’t want to. I feel I have so much reality in my life that I like to live in a fantasy world at least while reading books or watching movies. I can remember only handful of non-fiction books that I have read in my entire life. Anyways, since I bought it I ventured along to read it to get a feeling if it reflects the author in the same way I had felt her in-person. Here is my take on the book.

Danielle Sheets co-authored this book - published in 2012 - with her mother Belinda Nash, a biography of Grace Sherwood - the last witch to be "convicted" by ducking on July 10, 1706 in the Lynnhaven River. Ducking was the ordeal by cold water where the accused was submerged in a stream of cold water and acquitted if the accused survived. Grace Sherwood had survived this ordeal and had lived into her eighties. This was the only trail by ducking held in the state of Virginia. However, she was forever marked as a witch that had gone through the ducking. Belinda Nash's interest in Grace Sherwood and her ordeal started when she was looking into the history behind why a street was named as Witchduck Road nearby where she lived.

Because of her research and work, Grace Sherwood was given a pardon on July 10 2006, 300 years after her trial by ordeal - the trail that took place at the very Ferry Plantation that resides today. Here is how the house is now. The book opens with the how the life was in the early 1600s, leading up to the indentured services by contracted people and how the first African American people were brought it. It was a time where despite the hardships and slave labor, the indentured servants, including the African Americans, were freer and indeed became free after serving their term per the contract. It still appalls me how one human can do that to another human - slavery in whatever name you call it had been existing in every part of the world, just named different. It was also chilling to read a brief account of the battles between the Powhatan Indians and English settlers when England ruled that the local Indians should be made Christian. Why would anyone want to change the other? You are given passage, land and food to stay on their land and you go and attack their lifestyle - this is what many countries have been doing for so many centuries. Sadly it still continues, but the scarier part now is that the battles are at higher stakes now -stakes that might eliminate the human race one day.

The book moves on to illustrate the first settlers highlighting about Adam Thoroughgood who created New Norfolk County whose daughter married Thomas Walke - one of the affluent settlers in the colony. It continues on to highlight the slave trade of African Americans in English settlers colonies and the laws that were brought around it - more to encourage slavery and discourage folks who wanted to help the slaves. And also increased the inhumane methods the masters instilled on the slaves. This resulted in giving birth to sprinkling powder and curses. Added to that the constant working on farm with moldy grains around caused psychedelic effects on these people when ingested. Since mostly women ate these grains, the mass hallucinations caused as a result, put fear in officials making them to believe in witches and witchcraft - something that was a fear in England. Thus continuing into the witch trials and eventually leading upto the trial by ordeal of Grace Sherwood.

The book could have been printed in a smaller print and with single line space formatting to reduce the number of pages. It would still have been easy to read. The book also started abruptly without any preface or text. Perhaps non-fiction books are written thus.  In the beginning of the book, my stomach started growling at the description of so much food in the area during the early 1600s, and I had just had finished my lunch when I had picked the book to read. :P The English used is very old world  - wonder if the author kept it that way to keep with the sentiment of the time the tale took place in. Author uses a word "ancient women" in a few places (Pg 121 and 122) - wonder what that meant, old women?

A well written book with snippets of history exactly depicted without any embellishment. Some of the lines did bring a jerk to my heart and mind making me think how insane, cruel and unjust human person is not only against his own race but against the flora and fauna. The book takes through so much of historical changes going through America at that time, but I would have loved it if it stuck to purely the life and trials of Grace Sherwood.

A good attempt to bring history into an interesting tale making it a very quick and easy read.

2. Some grammatical errors are seen in the book - Pg 28 (unrelated "the" in the second line of the second para).
3. Battle of Severn - The shortest battle that lasted only about half hour occurred on March 25 1655. For such a short battle the death toll was really huge - 40 dead and 32 wounded. More about the battle here.
4. Another part of history revealed called the Bacon's Rebellion in 1676 led by Nathaniel Bacon, Jr. against the then Governor William Berkeley. More about it here.
Tags: books, critique by amateur, reviews
Subscribe