Angel's Wolf is the third novella in the Guild Hunter Series by Nalini Singh which was originally published as part of the anthology "Angels of Darkness" along-side three other authors in October of 2011 and later on  later published in Angels' Flight in February of 2012 along with three other novellas that Nalini Singh released between 2009 and 2012. The story plot occurs after the plot in Archangel's Kiss - the second book in the series (post link here) - revolving primarily around Noel - the vampire who was badly beaten beyond recognition if not for his ring given by Illium on his broken finger - and Nimra - 600 years old angel ruling the territory of Louisiana under Archangel Raphael. 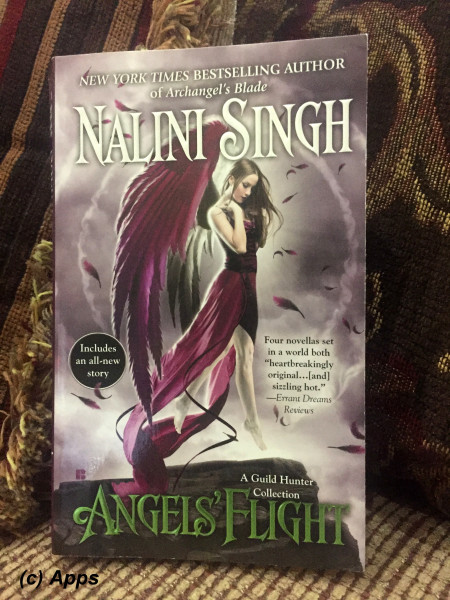 Noel, after healing at The Refuge from the terrible attack he faces at the hands of Anoushka, is sent to serve under the powerful angel Nimra. He believed that everyone thought him to be weak after the terrible ordeal and will break one day, hence has been sent to Nimra to be her toy. For Nimra is famed to be ruthless and cruel since many angels also fear her. However, on having his first real conversation with Nimra, he realizes that he has been transferred to Nimra to help her in finding who was trying to kill her. A potent called "The Midnight" although will not kill an angel can leave her without power and unconscious for a few hours that would be enough for anyone to kill her - was used in the incident which killed her cat, Queen. Now Noel is tasked to secretly investigate folks in her inner circle - as only a few of her courtiers have access to her inner sanctum.

In the process of his investigation, Noel realizes that all that Nimra shows on the outside is not what is inside. He starts falling for her very fast and very strong - especially after all the pain he had gone through and thought he lost the ability to feel. Will Nimra reciprocate the same? Will she be ready to take on a partner as strong as her and capable in every way to rule his own territory one day? But who was trying to kill Nimra? And why? And Noel also is keen on finding what is it that of Nimra that fears the angels as well.

Nalini Singh has created another marvel with this chapter. I would love to see more of Noel and Nimra in the future. When I had read Archangel's Kiss and had come across the chapter that explains the torture done to Noel and the pain he goes through, my heart had gone out to that character. I am glad Nalini Singh wrote a story on him alone giving some relief to the character. A short but pleasureable story.

Spoiler Alerts:
1) The plot is very similar to what Nalini Singh has written a year later in Archangel's Storm (Post link here) - although that plot is in much elaborate than this one.
Tags: books, critique by amateur, guild hunter, reviews
Subscribe