Angels' Judgment is the second novella in the Guild Hunter Series by Nalini Singh - first published in the anthology "Must Love Hellhounds" in November 2009 and later published in Angels' Flight in February of 2012 along with three other novellas that Nalini Singh released between 2009 and 2012. This was also published before the second book in the series was done and can be considered another prequel to the Guild Hunter Series. The story revolves around Sara Haziz - who is on track to become The Guild Director of United States - and Deacon - legendry hunter known as Slayer who is brought in to hunt Guild Hunters gone rogue. 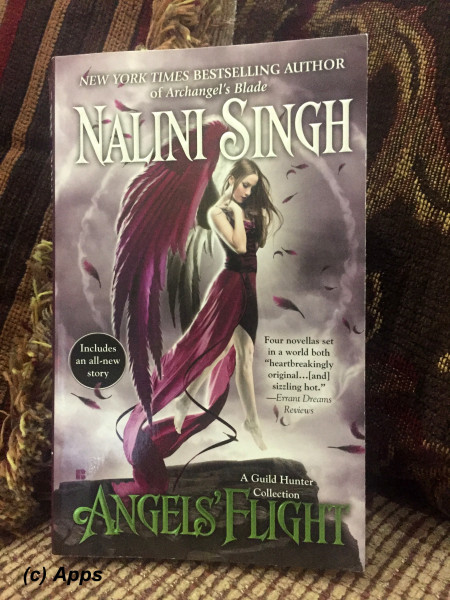 A Guild Hunter has gone rogue and is killing vampires - the near-immortals can also be killed if beheaded or burnt. Sara is tasked with hunting one of her own but she is sent the aid of Deacon aka The Slayer. One look at Deacon and Sara's emotions and hormones go haywire. Deacon is someone to be reckon with yet his charm and hunting skills tug at Sara's heart. Together they go on a journey that will be the cause to lose one of their own, as well as get their emotions tangled with.

However they are also followed by a group of vampires every step they go. The Guild Director position is changing face - the new face if accepted going to be a woman's. The Cadre is taking interest in the new Guild Director. Like how the current director Simon is tested, so is Sara being tested - much to her frustration.

Will Deacon and Sara successfully capture the hunter gone rogue? Or is he really a hunter? Will they act upon their feelings? How does Sara get out of the test by the Cadre? Or is it just an Archangel going for her throat - just for the heck of it?

Another novella that Nalini Singh has well written to give more life to the minor characters of the series. However this did not appeal me as much as the earlier novella. Still I would not discount it. A good read and a segway to the future books.

1) Sara is shown to have "the eye" - ability to have premonition of future events.
Tags: books, critique by amateur, guild hunter, reviews
Subscribe