Angels' Pawn is the first e-book in the Guild Hunter series by Nalini Singh published in March of 2009 and later published in Angels' Flight in February of 2012 along with three other novellas that Nalini Singh released between 2009 and 2012. This was published soon after the first book Angels' Blood was published focusing mainly on Janvier - a 300 year old Cajun-born almost-immortal Vampire - and Ashwini Taj - hunter-born Guild Hunter with her own daemons to fight. This book though published after Angel's Blood, can be considered a prequel to the Guild Hunter series. 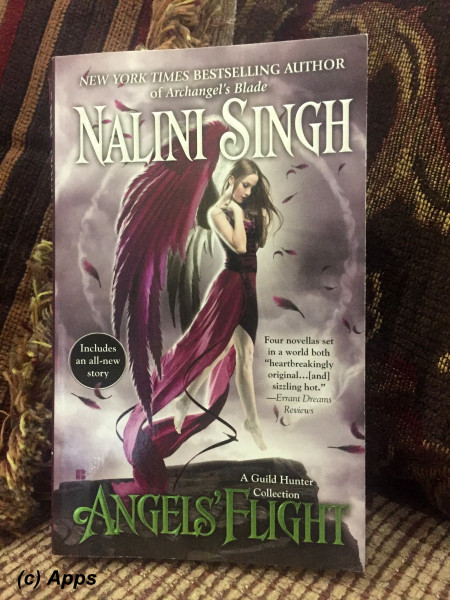 It has been a cat and mouse chase between Ashwini and Janvier since Aswhini has taken up her job at Guild Hunter. It always has been a question to Ashwini, the Guild, Vampires and Angels /Archangels - if Janvier on purpose goes rogue so Ashwini can hunt him, more a game than for-real going rogue. Yet as Ashwini gets closer, Janvier always patches up with his master and gets away scot-free - much to the frustration of Ashwini. However, this time Ashwini surprises herself by voluntarily seeking help of Janvier in rescuing a kidnapped vampire.

The Beaumont vampire family runs Atlanta — under a mid-level angel Nazarach. They've been a lucky family over the generations as every generation at least one person was Made vampire. And this generation they had two Made into vampires - Monique and Frédéric, a sister and brother. Antoine is the vampire head of the family with his lover Simone Deschanel - a 300 year old vampire serving under Nazarach. He has a sister Jean Beaumont and dotes heavily on Monique and Frederic. Now Monique is kidnapped by Callan Fox - leader of a band of vampires called Fox's Kiss - and the Guild is tasked in rescuing her. However, Nazarch would like Monique to be retrieved to him so he can play against the rising power of Antoine Beaumont.

Caught between the three entities - Knowing fully they are being used as pawns Janvier and Ashwini set on to rescue Monique despite the power games being played around them. In the midst their feelings for each other strengthen even though Ashwini would like not to - for she has a past that she feels would hurt her future. Will they rescue Monique and hand her over to Nazarach? Will Ashwini escape the unwise interest that Nazarach has towards her? Where does the relationship between Janvier and Ashwini lead to? Does she face her daemons and take aid of Janvier while facing them?

An e-book worth reading and is a quick finish with a good intro to some of the key players of the series. However, I recommend you to read Angels' Blood before reading the e-book to give you an idea of the characters. Well weaved in with the main book, yet standing on its own.

1) Nazarach's evilness and cruelty is shown in explicit form.
2) Ashwini and Janvier share quite a few romantic moments that gives us more to look forward to the book with the story of their own. Quotes like below wrench your heart in a good way and make it shiver and thump.

“So you love her still?" She found herself asking.
"Who?"
"The vampire. Shamiya."
His hand squeezed her calf in gentle reproof."A silly question, cher. You know love cannot survive where there is no light.”
Tags: books, critique by amateur, guild hunter, reviews
Subscribe