Archangel's Legion is the sixth book in the Guild Hunter Series by Nalini Singh published in October of 2013. The story begins from where Jason's was left-off in Archangel's Storm. With so many changes the Archangels' facing because of the Cascade, rise of Caliane, appearance of Neha's twin sister Nivriti - who was thought long dead, with Lijuan moving closer to becoming a Goddess with powers that no one can stop, the relationship between Elena and Raphael grows only stronger. However somebody or something is causing sickness in Vampires causing the near-mortals to die and making Angels fall from sky causing them life-threatening damage. Now Raphael and Elena have to work harder more than before to not only save their region (North America) from this unknown enemy looking for war but also deal with the growing powers within the Archangels, for Elena evolving into an full-grown angel before time, for Elena to play the role of a Consort successfully before time and for Raphael to fully comprehend the extent of his powers that are increasing. 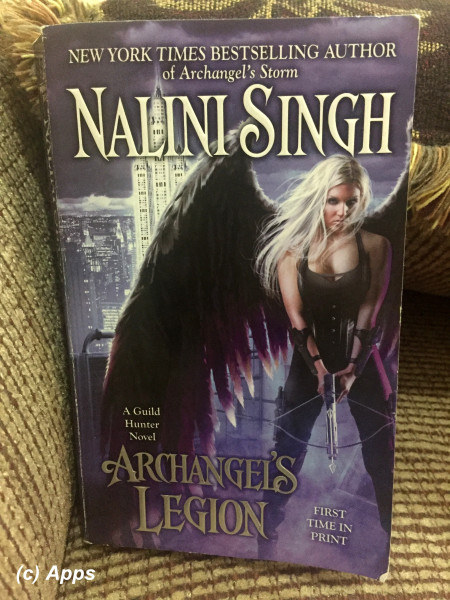 As Archangel Raphael and his consort Elena Deveraux relax in their home in the Angel's Enclave, when they watch - much to their shock - Angels falling from the sky during a storm that seems unseemly. Several angels - more than 800 - are gravely injured during this incident called as The Falling while five Angels lose their lives. Elena is shocked to realize that immortals can also die. As they are coping with this atrocity when they come across Vampires dying because of pox - Vampires don’t die normally. Raphael believes that someone - an Archangel perhaps whose powers are increasing due to the Cascade - is gearing to attack his region. With help of his Seven and his Consort, he sets upon to save New York and also prepare to go war with this unknown evil. But the key question is who is this? Is this one person's plot? Or many are involved? Or is it a cause of Cascade?

Elena continues to play the part of Consort in taking over the ownership to soothe the injured and share their hurt - something she was not to be ready for atleast another 40 - 50 years. And continues to be the Hunter she was in hunting the source causing the sickness in Vampire. But can Keir - the greatest healer of the angels - find a cure for the Vampires and also save all the injured Angels? As they are facing this threat, Caliane invites Raphael and Elena to a ball that includes all the Archangels except Lijuan (for she had attacked Raphael and got Caliane to wake up from her sleep. Caliane not ready to forgive her.) With the kind of reception she had received when they were invited to Lijuan's ball (in Archangel's Kiss), Elena was hesitant to go but who can refuse Caliane - An Ancient, Raphael's mother and her Mother-in-Law. In the meanwhile they have to figure out the affect of Cascade on themselves as well their Seven.

Another thrilling episode by Nalini Singh traversing the readers through the lives of Raphael, Elena and his Seven and brave the threats together. Nalini Singh has also mixed angel war-fare with mortal war-fare in the fight between two archangels giving it a tinge of reality at the edges - for wars are fought even now. Well-written enough for me to be reluctant to put the books down even when it was getting very late into midnight and I had a full day next day. A definite pick if you are curious to see how Elena and Raphael fare this testing period again.

Spoiler Alerts:
1. During the period of Cascade - when all the Archangels acquire more powers - some are gravitating towards more sinister ones while others taking on the brighter side of the powers.
2. Archangel Raphael develops healing powers -increasing at higher speed - and also becomes a bit mortal due to alliance with Elena.
3. Dmitri's wife Honor St. Nicholas has been successfully converted to a Vampire and is now healing. However there is little none of Dmitri in this plot. Would love to see him in the future books even though he grates at my nerves while reading. :)
4. History behind Raphael and Dmitri's friendship is revealed further.
5. Elena signs-up Izak -badly injured in The Falling - as the first-person in her future Guard - similar to The Seven of Raphael - albeit only verbal for now. So does Sameon "Sam" - a very young angel who was a constant companion to Elena in The Refuge - want to be part of her Guard.
6. Elena's mind opens up to more of her past that she had shut down aiding her in understanding her father Jeffrey better, but not enough to forgive him for being cause of her pain that wont leave her now forever.
7. Illium's - the blue-winged angel - bond towards Elena strengthens further in this book and so also his powers due to the Cascade.
8. Archangel Elijah - ruling South America - reveals his growing powers to Raphael and bonds to him as well. His history with Caliane is also revealed.
9. The love affair that has been going on for 400 years between Galen - Weapons Master and part of The Seven - and Jessamy - Scholar and Teacher at The Refuge - is explored bits and pieces here. Although their story is told in the novella Angels' Dance published a year before this book. I havent read that yet so cant comment on their history much.
10. Vivek Kapur - Computer genius and eyes and ears of The Guild though paralyzed from shoulders and below also gets Made into a vampire by Aodhan - on of the angels in Raphael's Seven. And also gets a position in Elena's future guard.
11. Aodhan's past is also explored in this plot.
12. The beginnings of the relationship between Janvier - a vampire just below the Seven - and Ashwini - another Guild Hunter and friend of Elena - is shown here. The book that I began the series was the story between Janvier and Ashwini in Archangel's Shadows.
Tags: books, critique by amateur, guild hunter, reviews
Subscribe