Fire Bound is the fifth installment in the Sisters of the Heart / Sea Haven series published in April of 2016. The story covers Lissa Piner - the fifth sister of the heart and has ability to control the element of Fire among other - and Casimir Prakenskii - the fourth of the Prakenskii brothers, also trained similar to his brothers, a master of disguise and three faint scars from his chin up to the top of his scalp, like claw marks. 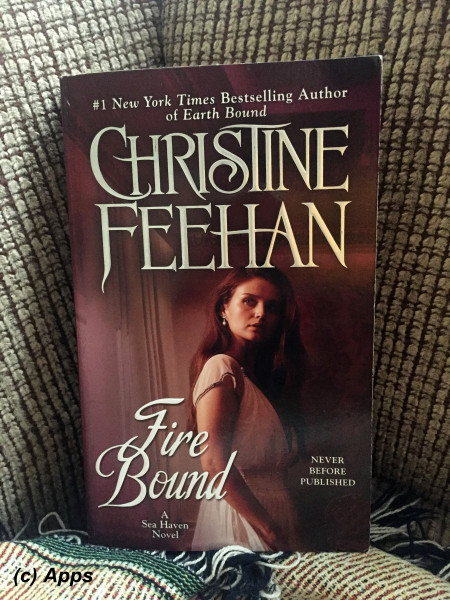 Lissa Piner found peace at the farm with her sisters of the heart. However she had one mission to complete and for that she got an opportunity now which she didn’t want to miss. As a famed glass blower she got three big hotels in Europe that are interested in her work, commissioned her for one-of-a-kind chandeliers. But that was not the only reason that she wanted to get out of the farm. From the time Ilya Prakenskii has come to Sea Haven and settled, one by one each of the remaining six Prakenskii brothers have been coming and wooing her sisters and settling. So far four have settled and she did not want to be the fifth. Two birds with one shot is what she thought this trip would be for her. Or so she thought.

Gavriil Prakenskii - second of the seven Prakenskii brothers and engaged to Lexi Thompon - didn’t like Lissa going alone especially when the threat with Sorbacovs - Uri Sorbacov and Kostya Sorbacov - to them had not eliminated. So he tasks another of his younger brother who wasn’t living on the farm - Casimir Prakenskii - to protect Lissa all the time. Lissa had no idea that the very person whom she wanted to avoid, would be by her side all the time much to her dislike. However neither the Prakenskii brothers nor her sisters of the heart knew everything about her past that may cause unknown troubles to both Casimir and Lissa.

Lissa was the daughter ofMarcello and Elisabeta Abbracciabene - born into the Ferrara family as Giacinta. After losing her parents in a tragic family incident, she was taken by her uncle Luigi, raised in America as Lissa Piner - a glass blowing artist - while to the world she was dead in the same incident. Now she was on a mission to eliminate the final of those people who were behind the murders of her parents and the rest of the household - the Porcelli family. But will Casimir aid her or be a hindrance with his over-protective nature like any other Prakenskii brother? Who was behind the murders? Is the final person she thinks the true final one? Will Lissa be able to get justice for whatever happened to her? But what are the secrets her uncle Luigi hiding?

And how are the paths that Casimir has defined to reach the Sorbacovs cross with Lissa?  Why is she determined to kill the Sorbacovs as well was something Casimisr couldn’t understand.  It was his mission to take them down and keep his brothers safe forever - a mission he had accepted that he probably would not come back alive. With Lissa in the mix, and knowing how she is bound to him, his plans would have to change. Will he be successful in killing the Sorbacovs? Will he rescue Lissa from her enemies? Will he claim Lissa as his brothers have claimed their mates?

Chrisitne Feehan as always delves through the dark world of human depravity, this time around she dealt with murderers, assassins, smugglers and cruel dictators. Another intense novel that once you start would not want to keep it down despite the many repeating paragraphs again we see in this book. Go pick it and enjoy it.

Spoiler Alerts:
1. Arianna Ridell - wife to Maxim Prakenskii - is pregnant in this book. She is one of the sisters of the heart and bound to element of Air.
2. Viktor Prakenskii makes an appearance in this book, finally. He stays long enough to get the character embedded in your brain.  Now I cant wait to read the story of him and Blythe - the last sister remaining and waiting for Viktor. I have a feeling they both are already married.
3. I am still waiting for Elle Drake and Jackson Deveau to come back from their extended honeymoon to see what they will do about Lev Prakenskii settling in Sea Haven - since he was connected with the Stavros Gratsos and although tried to save Elle Drake, Jackson might not see that way.
4. I am looking forward to see how will Evan Shackler-Gratsos be eventually brought to justice before the series ends. Its obvious now that Viktor Prakenskii will be handling that.
5. Evan has also put a hit on Jackson Deveau - husband to Elle Drake, the last Drake Sister in Sea Haven. This would be a very interesting book of Viktor to read with all these elements coming to a closure.
6. Viktor and his biker gang of 18 people will be moving to Sea Haven in the next book. As mentioned in her site and in talks with her, Christine will be starting a new series with this biker gang. Wonder if there would be 17 more books or some of them she would group.
Tags: books, critique by amateur, reviews, sisters of the heart
Subscribe