Archangel's Kiss is the second book in the Guild Hunter Series by Nalini Singh published in February of 2010. The story picks up after the war between Archangel Raphael and rogue turned bloodborn Archangel Uram in Manhattan, NY where in trying to save the world of Uram's atrocities, Raphael and Elena get seriously injured. So serious that Raphael was ready to let go of his immortality and die along-side Elena and would have if not for his true love and Ambrosia. Now Elena is awake after a year in coma with a her own wings that flare from deepest black to indigo, deep blue, dawn and into white gold and immortality. 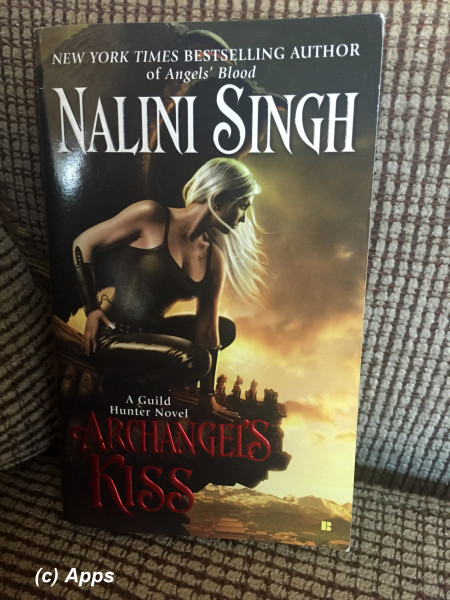 Elena Deveraux wakes up a year after from her coma with immortality and wings - wakes up an angel becoming an angel and a hunter. Last thing she remembers is falling from the ledge of the building Uram had made his base, with broken bones and near to lost spirit surrounded by Raphael's arms and wings. Now she is a Made Angel with powers lesser than a baby angel and have to evolve quickly as the world is looking at Raphael and his pet to fail. Archangel Raphael takes her to The Refuge - place where all angels, babies and adults alike learn to survive, heal and grow before let into the world; similar to an infirmary or medical center for humans; a place where no humans are allowed to come - so she could heal and at the same time learn to live the life as an angel as well as an immortal. But she has only little over two months to get her angel and immortality abilities not only learned but mastered as best as she can; for Archangel Zhou Lijuan who rules China is hosting a ball in honor of Raphael and his once mortal human Elena whom he embraced.

Elena goes from being a Guild Hunter to a Guild Hunter/Angel and lover of Raphael. But that doesn’t mean that the other Archangels and Raphael's Seven welcome her with the same stride as Raphael. She has to prove that she is fit for Raphael and that she hasn’t weakened Raphael's immortality or created any nicks in his power in anyway. If not for the others to accept her, but for herself as well; for she is falling slowly for this beautiful but lethal archangel. And the added weight of being the first Angel to be Made in 1500 years is not to be discounted. As Elena continues with her healing, preparing for battles unknown, learning the warfare - angel-kind, human and vampire - and knowing about the angels history, her romance with Raphael also blooms. Raphael, although feels the impact to his immortality - injures easily, heals slower - starts to realize that with Elena being on his side he has less chances of turning into Uram or Lijuan.

But, its just not for the ball that Lijuan is throwing that Elena has to face. Someone is hunting and injuring Angels severely - even as young as Sameon AKA Sam  - in The Refuge - the safest known place for all Angels alike despite the differences between their archangels. Elena is not tasked to trace this angel who is causing harm. Glad to be back as a hunter, Elena pushes herself into it, esp after finding Sam injured badly - Sam who has come to be her friend in The Refuge where she is learning the history, an angel who looks like  a four year old in human terms, but far more older yet a baby in angel years. Is someone trying to pit Archangel against Archangel - an idea that might have spurred after the battle between Uram and Raphael resulting in elimination of Uram permanently - to get the power of The Cadre imbalanced?

Lijuan is rumored to have mastered over death and beyond attaining the stature closure to Goddess that is diving her to insanity. But what is the depth of that no one knows. What other powers she had acquired no one knows, although Raphael's spy master Jason - a 700 years old Angel with sooty black wings and long black hair - had uncovered some truth behind the rumors. So what is the hidden agenda behind the ball that she is throwing? Is that to really welcome Elena to the angel world? Or to have all the archangels under one roof so she could put her next move on all of them together? Raphael has little trust in Lijuan to let Elena become the target nor does he believe a single second that the invitation for ball is simply a ball.  While they hunt for the angel causing the trouble at The Refuge, both Raphael and Elena also prepare for the vicious welcome that Lijuan might have planned for them.

Another gripping story of Elena and Raphael who continue to face hurdles from the Angel-kind and Vampire-kind to take them down. Nalini Singh did certainly spin a tale to keep you at the edge of the seat and get the reader interested in not only this sequel but the subsequent ones.

1. Only an Archangel whose heart beats for true love and experiences it can produce Ambrosia through their canines. Ambrosia - that can make an eligible one to an Angel.
2. Cadre - For an Archangel to be part of Cadre means being an absolute ruler over a portion of the globe. They rule their territories and those beings within them with iron control. The only being strong enough to stop an archangel is another archangel,  and when they clash, the fate of mankind hang in the balance.
3. All of Archangel's Seven get introduced in this book - Jason's past is revealed a little to add intrigue to the plot. He is the spymaster to Raphael. So also a bit about Aodhan, another angel of Raphael's Seven. Elena becomes fond of Illium aka Bluebell - so called because of his Blue wings edged with silver and black hair tipped with blue - forming a strong bond of friendship and trust between them. Venom - a Vampire - and Galen - an angel - work on bettering Elena's skills as an angel. Dmitri - the leader of the Seven - as usual taunts Elena with his sensual scent while Naasir - an almost-made Vampire and powerful - gets introduced.
4. Elena develops new abilities as she is evolving as an angel like ability to track an angel - although she could track Uram once he had turned rogue. So does the book shows evolvement in Raphael.
5. Can an angel turn to god? That’s what seems to be happening with Lijuan - Archangel of China.
6. A glimpse into Elena's past involving her mother Marguerite who committed suicide and holder sisters Mirabelle and Ariel murdered by rogue vampire Slater Patalis is exposed further in this book.
7. The story behind Raphael's parents - Archangels Caliane and Nadiel - is given introduction with more history to their life.
Tags: books, critique by amateur, guild hunter, reviews
Subscribe