Angel's Blood is the first installment in the Guild Hunter series by Nalini Singh and was published in March of 2009. The book introduces Archangels who rule the world that includes Vampires and Guild Hunters. Primarily the plot focuses on Archangel Raphael - who rules North America from his Tower in Manhattan, New York - and Elena Deveraux - the best Vampire Hunter from the Guild. I have read book numbers #3, #4, #5 and #7 in this series and now going back up to the first book - I have a rule when reading series: Always read from the first book. Hence going back to the beginning - to find the origin of Elena and Raphael and their lives that weave through these web of books. Nalini Singh has mentioned in her site (Link: http://nalinisingh.com/books/guild-hunter-series/) that all the books are written as stand-alone and one can pick them at any stage in the series and still follow-it. However, I always feel that on should read the first book in any series to get a better idea on the characters and plot. It holds true with this series as well - from my perspective. 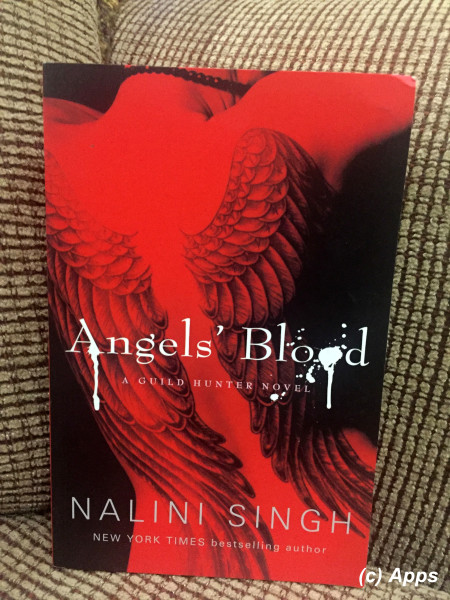 Elena Deveraux is one of the best Vampire Hunters in the Guild and she knows it. However her heart takes a jerk when she is called by the Archangel Raphael for a work. Except his note says "I would be pleased if you would join me for breakfast.  8 a.m. - Raphael." Taking it up as a challenge Elena meets with Raphael. But little does she know that the meeting has to do more than work that Raphael has for her. She wasn’t prepared for the sexual pull towards him - at times Raphael is manipulating and other times her heart is betraying. Famed for hus ruthless but just rule, Elena wasn’t ready to lose her heart to him when she would just be another toy to him. Archangel Raphael had been intrigued by Elena for a while, but as a Guild Hunter only, until he meets her for the appointment he had set. She not only intrigued him but also created feelings and emotions that rarely existed with immortals - especially with someone who had lived thousands of centuries like him. She invoked memories hidden inside him and also interested his brain like no one in a very long time. And he was not ready to let her be just a Guild Hunter for his work, but he wanted to make her his.

What will these feelings do to Raphael - will his immortality change? That is something Raphael have to go through with his quest to make her his before he knows the answer to that. Is Raphael willing to go that far? Elena has her own demons to fight that are nothing related to the work she is undertaking for Raphael. And now she has to fight Raphael's interest and advances towards her as well. Apart from that Dmitri had little trust in her, trying to use his scent of allure to trap her in so she wouldn’t cause any harm to Raphael - not that she would.  Elena has to fight off the pull towards Dmitri as well. How will Elena come out of this? Will she fight or succumb to Raphael? The work that Raphael wants her to do is no ordinary either. She is an expert at tracking down Vampires-gone-rogue but can she track an angel? This one being Archangel Uram - who rules part of Europe and all of Russia - tasked to Elena to hunt since he is believed to be gone rogue and delved into madness and bloodlust. Where will the hunt lead Raphael and Elena to? Where will the pursuit of Elena by Raphael land him into?

A sub-plot involving Elena's past and her distance with her father and his second family runs along the story. This ties in with the past that Elena is reluctant to share with Raphael and also have nightmares often. Though this is the sub-plot, it becomes key to many aspects of the primary story.  All of Raphael's Seven (Dmitri, Illium, Venom, Jason <See if all are introduced and update this line accordingly>) - powerful Vampires and Angels who guard the Archangel - along with his butler Montgomery are introduced too.

The first novel on the Archangels, Humans, Angels and Vampires is very well spun by Nalini Singh. Having read three future books now I know why her stories intrigued the population. A different view point on Vampires and how they are made, Angels and how they become and the Archangels who rule the world no similar to what humans do yet distinctively different. A definite read for any day to get lost in an alternate world with more reality than one can imagine.

1) Although I have written about Dmitri's story ahead of this one, this book gives more insight to his basic nature, why he was chosen by Isis to be Made and why the bond between Dmitri and Raphael is so thick that it cannot be broken. If I hadnt read his book first I would have started to hate Dmitri but now I just understand him more, making me like him without guilt.
2) Ashwini - another guild hunter - is introduced here. Hers was the first story I read in the series (post link of my review here) so it was fun to see her character evolve gradually.
3) Raphael goes into The Quiet - a state of mind that he has only gone once before that pushes him to do the justice without reason, meaning he may be right in passing the judgment but he has less tolerance to reason on the method or think about consequences.
4) We also see that Archangels can be hurt very badly if they get their mortal feelings or emotions alive again. And that adds another layer of something unknown to the Archangels which is yet to be found - is it for advantage? Or for disadvantage?
5) We also get introduced to Holly Chang - about whom I already read in Archangel's Blade story - and get a first glimpse of Dmitri's tender heart (if he has any) towards innocents. This sub-plot continues in Dmitri's story later.
Tags: books, critique by amateur, guild hunter, reviews
Subscribe