Stars: 3 / 5
Recommendation: An easy romance-murder mystery read that needs no intense exercise on your mind.

The Obsession is the next stand-alone novel written by Nora Roberts published in Apr of 2016. Like I mentioned in my previous reviews of Nora Roberts books, I find her flair for writing plots around strong characters with equally impressive story-line has been reducing considerably since the release of The Bride Quartet series in 2009. Perhaps change in publisher or editor occurred that year or perhaps she started having aid of ghost writers for her plots, but the books have been paler except for a few - Guardians Trilogy that started n 2015, The Search published in 2010 and partially liked the Cousins O'Dwyer Series published during the years 2013 and 2014. The Obsession shows promises that she is coming back to her pre-2009 writing however she is not there yet, in my belief. Yet this book is not a complete wash either unlike a few of her other works. But, there are certain similarities around the plot-line with previous other works in recent years. The story follows Naomi Bowes / Naomi Carson and her life after she finds her father's deepest secret. 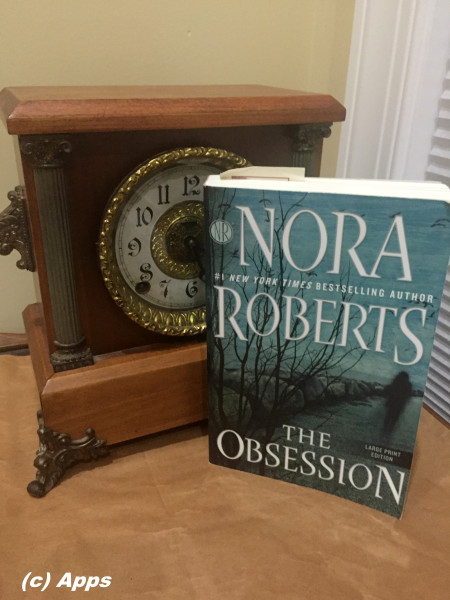 The Obsession begins when Naomi Bowes is 11 years old and follows her father in the woods beside her home thinking he is heading there to hide her birthday present - hopefully a red bike. Her father is very strict and very very religious. However, Naomi finds a girl traumatized, raped, tortured and chained in the cellar. Overcoming the initial shock, Naomi takes in her father's cruelty behind his religious mask. She saves the girl by taking her to the local police station and giving up her father in the process. With her father exposed as a serial killer, her life takes a turn into witness protection landing her family - mother Susan and brother Mason - into the protection of her uncle Seth and his partner Harry who become their guardian uncles. A few chapters of her life after the exposure continue with Naomi constantly being hounded one way or the other through media or her mother's stupidity and finally settling into her new life with few hiccups whenever her past comes into present. But she settles.

The plot then moves to present times when Naomi Bowes - now Naomi Carson - buys a dilapidated house in Sunrise Cove, Washington to get it renovated by herself. For someone who had kept her life in a shell due to her past and hasn’t had anything to hold on to so she could pick up and leave whenever the past hunts her down, she surprises herself with this impulse buy. And the responsibility comes with negotiations and dealings with local carpenters, plumbers, etc which means building relationships - that Naomi had pretty much stopped extending it beyond her small family (now just her two Uncles, Seth and Harry and her brother Mason) - that Naomi is willing to take and spread herself. She is a successful photographer now who has travelled all around the world -which will pretty much come in handy for her to get the house renovated.

Xander Keaton, local mechanic and the part owner in a local bar with his band, The Wreckers, where they play regularly. His blue collar job comes with a penchant for books and being an astute businessman. Xander is very interested in Naomi and him being a fast roller, starts moving on to her immediately - much to the dislike of Naomi in the beginning. However, Naomi eventually begins to trust him along side with settling in Sunrise Cove and getting into the depths of community living. The mystery begins here again when the body of a local woman is found with similarities to the victims of Naomi's father - bringing her past smack in front of her face again. The plot continues to the third phase in the book where the focus shifts from Naomi's father to a copy-cat killer who is mimicking her father with Naomi being the ultimate prize. Will Naomi pick up her sticks and move away to save the little community that she has come to love? Or make a stand and face the killer? Will she let go of Xander or will Xander hold on to her so she doesn’t need to turn away from relationships? Who is it that is bent upon targeting Naomi? As far as she knows she hadnt had enough relationship with anyone that they could target her. Is her father doing this all-over again?

Interesting plot that has readers gripping to the book. However I still feel that there is that spark, that intensity, that depth of description of the characters and surroundings missing in Nora's book again, although it is much better than the previous one. The book was also divided into three parts - Exposure, Depth of Field and Focus - all terms of photography giving a strong connection to Naomi Carson / Bowes. And that is all the strength I see here. The romance between Naomi and Xander is delightful but very practical with a few hits on emotional ties. The mystery surrounding Naomi's father and the copy cat serial killer keeps you gripped, but you tend to lose hold with the dryer parts of the book - which were completely absent in -her earlier works. And adding to that I could guess who the copy-cat killer was when I was three-fourths into the book. This is never a good sign for a murder mystery.

The plot closely resembles to one episode that I watched on Criminal Minds TV Series. It begs to ask if Nora is picking her plots from TV shows now. This is the fourth book since 2010 that she has written on serial killers, killers fascinated on the primary female character and witness protection life. First time in The Search which was published in July of 2010 - Fiona Bristow lives a life of semi-seclusion to get some peace after being the only survivor of the Red Scarf serial killer and is followed by a copy cat killer. Second time it is in The Witness published in April of 2012 - Elizabeth / Abigail Lowery on a night of rebellion finds herself being the only witness to a mob-hit putting her life forever in witness protection. Third time it shows up in The Collector published in April of 2015, but this time as contract killer - Lila Emerson who was on an apartment-sitting job, witnesses the murder of a woman in the apartment across her building and becomes the target for the assassin and gets pulled into a world of stolen Faberge eggs.  That is a lot of repetition of the plot in such a short period of time for an author such as Nora. Perhaps they wouldn’t have been looked repeats if they had been grouped together under one title - something on the lines of "Case Files of …..".

Despite all the reasons I still think this is a better work from her in recent years and was a pleasure to read it. One of those books that will clearly take your mind off your plate for the moment and at the same time keeps you on the edge of the world between reality and fantasy giving you good time for your money.
Tags: books, critique by amateur, reviews
Subscribe