Stars: 4 / 5
Recommendation: For everyone who have fetish for courtroom drama, this is the lawyer's case files that one would definitely want to read.

The Case of the Shapely Shadow is the 63rd installment of the Perry Mason series by Erle Stanley Gardner published in October of 1960. The case deals with the usual mystery with his client and the court room drama that follows for Perry Mason. 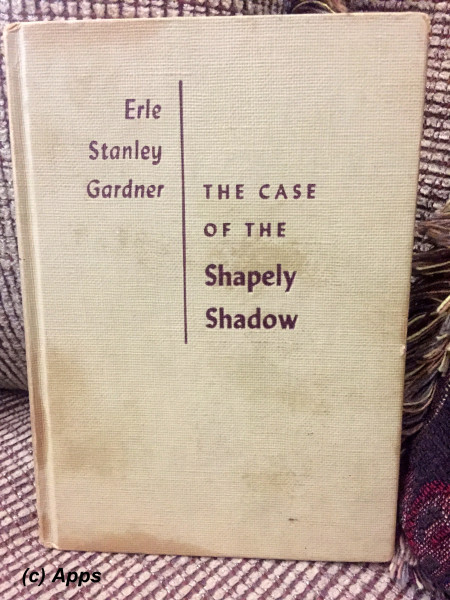 The plot begins with a plan Jane type of girl, Janice Wainwright, comes to Perry Mason with an ethical problem for which she is looking for a solution. She is working as a secretary for one Morley Theilman, a real-estate broker. Her boss asks her to deliver a suitcase, that she thinks is full of bills, in a locker at the Union Depot. She believes that Mr. Theilman is being blackmailed and she want to be certain that she can open the suitcase and confirm her suspicions, yet not get in trouble with law. Her only proof was a torn piece of letter supposedly mailed by A. B. Vidal to Morley L. Theilman with a single line: GET MONEY. INSTRUCTIONS ON TELEPHONE. FAILURE WILL BE FATAL. Mason sorts out the ethical dilemma and opens the case for her and finds money indeed. He and his secretary Miss Della Street, make a note of some of the numbers on the note, then he sends Janice and Della away to take care of the errand as instructed by Morley.

As always, his sharp brain processes the entire thing in various angles, seeing it in future steps for every angle, he gets intrigued more than needed as he believes there is more to the story. He takes help of services of Paul Drake's Drake Detective Agency and sets on to find who Morley Theilman was and everything surrounding him. Little does he know that a simple thing like that would land him a case that would not only end in murder but also gets him a subpoena to appear in front of the grand jury. But he doesn’t waver a bit and deftly thwacks away all the attempts of the District Attorney in indicting his client, Janice Wainwright. Who was blackmailing Morley? Was Janice really in love with him? Was it his ex-wife Carlotta Theilman? Or his current wife Agnes Theilman, who was an ex-showgirl in Vegas? What was the reason for the murder? What tricks lay under that suit of his that Perry Mason comes out unscathed again? Who was the shapely shadow who followed Morley Theilman the night he was murdered? Questions that can only be answered if you read the book.

Erle Stanely Gardner, a master at spinning court room dramas, has done it again with this book. However in this plot the case originally is handled by Manlove P. Ruskin, one of Hamilton Burger's best trial deputies, but later on for a brief period of time Hamilton Burger also steps in. Does it matter for Perry who is at the prosecutor's end? I guess not. Since he still thwarts them the same way he does anyone else. Another excellent read to keep your mind active.

1) This book was made into an episode of the TV series Perry Mason two years after it was written.  Although the episode is based on the book, there are quite a few dissimilarities between them.
2) In the TV episode however, Hamilton Burger is the only one who prosecutes the case.
3) Perry Mason also gets an assistant, David Gideon, in the episode. He first appears in The Case of the Posthumous Painter (originally aired in 1961. Although none of the episodes that David appeared on were based off any book written by Erle Stanley Gardner except this one. In the book though there is NO David Gideon.
4) Henry Battle, is introduced as brother of first Mrs. Theilman in the episode, although doesn’t exist in the book.
5) Unearthing that Agnes Theilman's maiden name was Agnes Vidal is done by Perry Mason in the book while in the episode Hamilton Burger does so.
And here is the episode:
Tags: books, critique by amateur, perry mason, reviews, tv shows
Subscribe