The Case of The Bigamous Spouse is the 65th installment in the Perry Mason Series by Erle Stanley Gardner. The book was published in August of 1961. It was also part of the Perry Mason TV Series and aired on November 14th of 1963 - just two years after it was written. Another seemingly simple plot turns into a twisted one within a few pages keeping the readers on the edge. 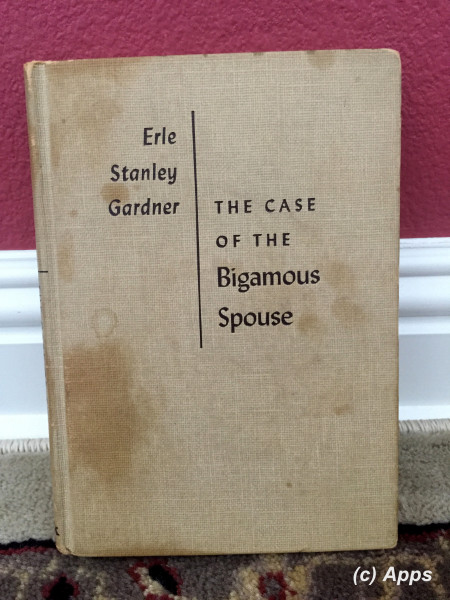 Gwynn Elston approaches Perry Mason with a rather weird case - that her friend's husband was trying to poison her with strychnine. Upon further inquiry, Mason finds out that Gwynn is working as a door-to-door saleswoman for encyclopedias and living with her best friend Nell Grimes and her husband Felting Grimes. During one of her visit to a home of one Mrs. Franklin Gillette. However when she sees Franklin Jr. she gets the shock of her life - he is a spitting image of Felting Grimes. Confused she inquires further with the child and confirms that Franklin Gillette and Felting Grimes are indeed one and the same. He was leading a double life. And now she is worried that Felting Grimes has suspicion that she is on to his trail and he is resorting to kill her. Mason accepts the case and puts Paul Drake to investigate this further to find out how much of what Gwynn said is truth and also to find out who is the bigamous spouse - Mrs. Gillette or Nell Grimes. Before the investigation could proceed further to a decent situation, Gwynn calls Mason the next day reporting that she found Felting Grimes dead as a stone right near Baxter Estate - next door to where Felting Grimes lived with Mrs. Gillette and their son as Franklin Gillette and owned by one George Belding Baxter. Soon after despite the efforts of Mason to hide Gwynn, Lt. Tragg arrests her under conspiracy to murder of Felting Grimes.

Thus begins the complexity of the plot leading Mason to murder, wanted criminals, blackmail, robbery and lost fathers. Gardner leads the readers into these dark paths all the while keeping them guessing as to who killed Felting Grimes and for what purpose. Another excellent mystery written by Gardner. I must say the characters lived through it even in the TV Series to make it more alive and successful. Even though if you have watched the TV series episode, do pick up the book and read it. It will not disappoint you.

Spoiler Alerts:
1) There were a few differences between the book and the TV episode. Primarily with the child. In the book Franklin Gillette has a boy called Franklin Jr. with Mrs. Gillette. In the TV series they changed the boy to girl and had no name to her.
2) In the TV Series, the character Gwynn Elston was played by Pippa Scott. I remember her in Columbo's episode Columbo: Requiem for a Falling Star where she portrays as Jean Davis, personal assistant to aging movie star Nora Chandler (portrayed by Anne Baxter).
3) Although the credits show Lt. Tragg but he never appears in the actual show on TV. The case is lead by Lt. Andy Anderson instead.
4) In one of the scene Perry Mason while waiting in the ol' RanchHouse, Perry looks through a stack of old magazines, holding one up conspicuously so that the camera gets a good shot of the cover. It's a "Pulp Western" magazine, RANCH ROMANCES - Love Stories of the Real West. It is not mentioned however in the book as to what the exact kind of fiction was read by the ranch house owner, but only that he read fiction. This scene gave me a whole lot of set of books to read and perhaps for future blog posts as well. :P

Finally here is the TV episode based off of this book: