Lethal Black Dress is the tenth installment in the Crime of Fashion Mystery Series by Ellen Byerrum published in October of 2014. Lacey Smithsonian, the fashion reporter for The Eye Street Observer in Washington D.C., gets tangled with another fashion murder while  attending the fables White House Correspondent's Dinner - hosted by White House Correspondents' Association (WHCA), an organization of journalists who cover the White House and the President of the United States. Ellen has not written another Crime of Fashion book since then - I wonder if this will be her last in the series, although hadnt seen any official notice of that kind anywhere. 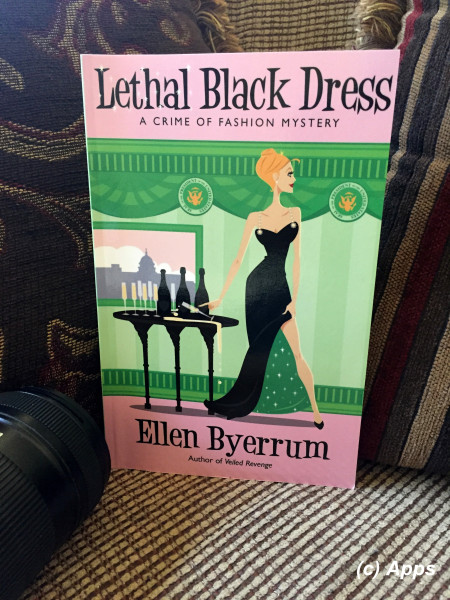 A select few from The Eye Street were allowed to attend the Correspondent's Dinner every year and this year Lacey Smithsonian was among them. Although she did not come there to report on anything, as usual her mind and keen eye were looking for any fashion ups and downs, any loops and ties, in all the distinguished folks at the gala - including The President of United States. She was mildly disappointed that everyone including her reporter friends from The Eye who attended black, except her - she wore Blue. Her "Source Date" for the event was Detective Broadway Lamont. The gala seemed exciting and successful what with all the who's who from the higher class over there, yet there seemed an oppressive feeling that Lacey could not shake off.

In walks Lacey's nemesis Courtney Wallace - a TV news reporter for Channel One - who had recently started her video feature on "Vintage Through The Decades" was a direct steal from Smithsonian's Crime of Fashion and Fashion Bites columns. And despite her efforts to avoid, Lacey gets tangled in a battle of words with Courtney, much to her dismay. Add to that Lacey suspects that Courtney wore a dress that is an exact replicate of the gown worn in the famous "Madame X" portrait by John Singer Sargent in 1884. Her BFF and attorney Brooke Barton also attends the event along-side her boyfriend Damon Newhouse - owns the Conspiracy Clearinghouse blog on the web at Deadfed dot com - since Damon was also a member of WHCA.

Then the blooper of the evening happens - Courtney while racing after an actress for a scoop bumps into a waiter holding a tray filled with glasses of Champagne and all of it gets spilled on her making her wet from head to toe. But what is that strange smell again, something garlic-like that came off from Courtney, wondered Lacey and that musty aroma that reminded her of something. Much later at the event it clicks to her brain that the garlicky odor belongs to Paris Green - an inorganic compound that was used as a pigment in early nineteenth century but was banned decades ago when it was realized that when wet it can be dangerous. The following day Courtney Wallace is identified as dead from unknown reasons - although she had been taken to hospital the previous night when she had collapsed at the end of the party, everyone assumed she was exhausted or had a flu. Lacey's brain immediately tunes to Paris Green, the odor that she had smelt on the dress Courtney wore.

Was her dress really laced with Paris Green? Why would anyone use that dye in this era? What was the cause of her death? Who was gunning for Courtney - although she was not short of enemies in Washington D.C.? Was the scandal she had been involved in with regards to Thaddeus T. Granville - political operative, his candidate Senator Swansdown and the opposite candidate's wife that almost cost Courtney her career? Does Drake Rayburn, the lobbyist and Courtney's boyfriend, have anything to do with it? Where does he fit? Why was Gregor Kepelov - ex-KGB and fiancée to Marie Largesse who is a psychic with fainting spells - so interested in the dress? In all this hubbub Peter Johnson another reporter at The Eye is showing more animosity with Lacey than normal is - causing Lacey to wonder if he could be a suspect. Well, the line of suspect keeps growing and the work for Lacey is cut out.

Another interesting murder mystery involving fashion, style and legends. Ellen Byerrum did her best in this again although I did feel at time the text was too much as always. The other characters linger around in the plot woven to make it a thick quilt. Well written to keep you on the edge of entertainment. Signing off with another of Lacey's fashion bites.

So join the Casual Friday Counterrevolution this Friday, and dress up instead of dressing down. You'll be doing your part to turn this menace around. Together we can stop the conspiracy known as Casual Friday, one Friday at a time.

Spoiler Alerts:
1) Ellen mentions about US government's clothing regulations during war-times - Regulation L - 85 - and peeked my interest to check it out. Very interesting that to balance outfits for soldiers during world war times, UK and US had regulations on women's clothing to save and use it for soldiers. Interesting that now women's clothing for fashion are barely there even though there is no world war around the corner. More on the regulation here.
2) Potrait of Madame X by John Singer Sargent - I had to google to see what that was before I could understand it in the book. Seems to the portrait had brought bad luck both to the artiste and the model. Scandal primarily for the artiste being "was the strap of one shoulder dropped in the original and repainted after?" More here
3) Julianne Moore and Nicole Kidman have since wore the replicas of this dress on two occasions. Check them out here
4) I envy Lacey of her Aunt Mimi's old steamer trunk that is full of memories, fashion memorabilia and long-forgotten dress patterns that had complete information but not yet been transformed. Lacey periodically takes one pattern at a time and converts into the dress per the pattern as she did in this book as well. I wish I had someone in my family that left that to me. Wouldn’t it be fun to wear Vintage designs with upgraded fabric and walk in style at any event?
5) Paris Green - Never heard of this pigment but makes me wonder how people made dyes in the centuries past. More about the pigment here
6) Lacey had accepted Vic's proposal finally and had gotten engaged in the previous book (Veiled Revenge). Now I am curious to see when they will get married and if a book will be written up - of course it would include murder. :P
7) As Lacey goes through the videos Courtney had made as part of her series, she talks about one look that reflects the movie His Girl Friday - a movie that was on my mind for quite sometime to watch. A post for another day.
8) Lacey's grandmother's quip about seventies fashion is very humorous and so to the mark - "The whole world was having a costume party and I wasn’t invited."
9) Ellen mentions about a vintage store in Baltimore that Lacey visits as part of her investigation. The store is called as Killer Stash in the book. However the store is Killer Trash in reality per google.
10) A sub-plot involving Harlan Wiedemeyer - The Eye's Death and Dismemberment Reporter - and Felicity Pickles - The Eye's Food Reporter - wedding plans continue thru the book.
Tags: books, crime of fashion, critique by amateur, murder, mystery, reviews
Subscribe