Happy Mother's Day to all the mothers and single fathers who play the role of a mother. This year this beautiful day fell on May 8th. The third book in the Key Trilogy series is titled Key of Valor - which is what every mother has in her to cherish, nurture and protect. Nora Roberts has put all those in the heroine of this book which was published in December of 2003. I picked up this book for this day for my review. 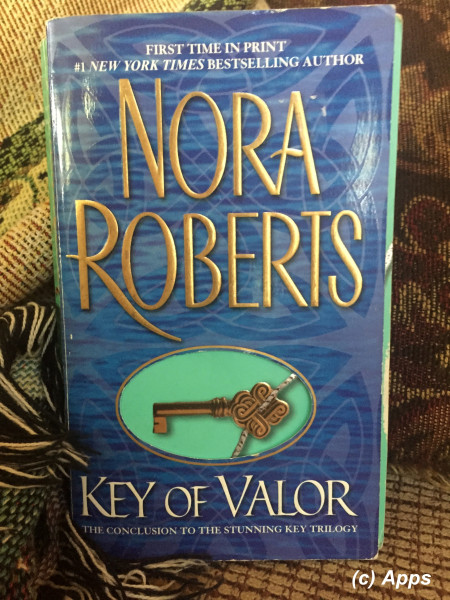 The plot revolves around the quest of the third key by the third pair - Zoe McCourt - hairdresser and single mom who moved to Pleasant Valley, PA to start a new life -  and Bradley "Brad" Charles Vane IV - running the family empire, the chain of HomeMakers. Zoe's son Simon gets a lot of space too in this part.

Malory Price and Dana Steele have completed her quests, unlocked two souls from the box and also found their mates in Michael Flynn Hennessy - Dana's step brother and owns and runs the local newspaper, The Dispatch - and Jordan Hawke - local boy who went to become a famous writer. Now comes the final phase that Zoe has to pursue. Although Pitte and Rowena - the Guardian and the Teacher of the three demi-goddesses - assure that nothing would touch Simon, her fears are still persist. Despite that she sets on the quest with the help of her friends and Brad. In the process she loses her heart to Brad even though she knows the risks of it  - for she had been in the same situation a long time ago. But she is not young anymore. Will she protect her heart as strongly as she protects her son or open it up to take the risk? We know from the past two books that Brad is nothing like who she had met in the past. But will she accept him? Watching her go through the emotions and make decisions is very intriguing and heart-wrenching. The quest finds its finale here with Zoe and Brad working in tow, fighting the evil Kane and reaching their goal at the end.

Normally in any trilogy that Nora had written I usually prefer one pair over the other. However, in this I couldn’t pick one. Every pair was unique and interesting. As to this part, the chemistry between Brad and Zoe is obviously there. However, although Brad comes up as a strong protector and partner for Zoe, I couldn’t really see anything that connects Brad to Kane for Kane to get back at him. With Flynn and Jordan in the first two books, it made sense of the attacks that Kane did on them. But with Brad it felt very disconnected. Also Zoe appears ungrateful or stubborn at time which I can see how it makes sense being a single person myself but it was getting tiring. I wish her acceptance of Brad could have come a little sooner in the book.

Nora Roberts has mastered with her pen and imagination again. Just like all of her trilogies, the third part is usually the intense one with everything amplified - emotions, quests, fights and strategies. Who would have dreamed of such a mythical tale - although it may have some root somewhere in some religion or race. Again there are some longer chapters that don’t hurt the book but don’t add much either. Although Zoe looks thankless and unappreciative towards Brad despite his help, once you read her story we get to respect her further more and understand her apprehension of Brad's advances towards her. Its such an exhilarating feeling to see the three demi-goddesses freed and justice brought to the evil Kane even though you literally did not take part in it. That powerful language and imaginative plot is what I miss in Nora Roberts' latest books. However, I recommend you to pick this book and read it to enjoy as much as I enjoyed it.

Spoiler Alerts:
1) Loved the name of the business the three (Malory, Dana and Zoe) plan to start together - Indulgence - a culmination of Art (an art gallery patronizing the local artistes), Knowledge (a book store with a tea room) and Beauty (Salon with full body services). It made me want to go to such a place immediately.
2) Pitte is indeed the Buck with eyes of sapphire blue that all three women see at the beginning of the quest - protecting and guiding them in his own way - although Zoe sees him / it after she is a little more into the quest.
Tags: books, critique by amateur, key trilogy, reviews
Subscribe