Key of Knowledge is the second book in the Key Trilogy written by Nora Roberts and published in November of 2003. The plot primarily revolves around the second pair, Dana Steele - local librarian and a fount of information - and Jordan Hawke - local boy turned famous writer and one-time boyfriend of Dana. The book continues the quest in finding the second key to unlock the souls of the demi-goddesses. 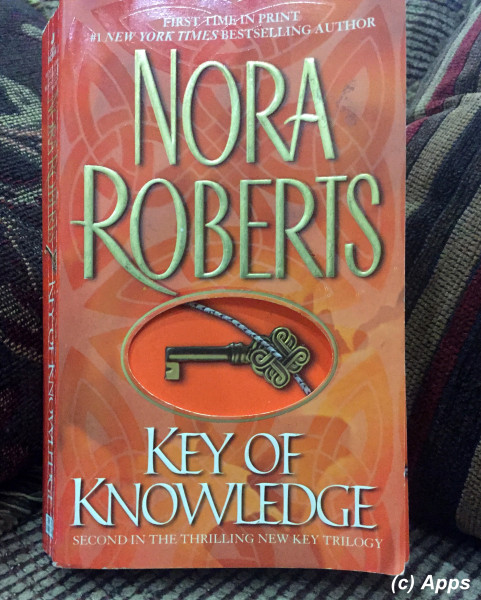 Malory Price completed her quest seeking honor, truth and courage and by finding the Key of Light. She also found a mate in Michael Flynn Hennessy - Dana's step brother and owns and runs the local newspaper, The Dispatch. Now it is the turn for Dana to find the key. Her clue ties up with past, present and future; the choices she made / makes; and unearth the truth from the lies.  She of course has the help of her friends, Malory, Flynn, Zoe - hairdresser and single mom who moved to Pleasant Valley, PA to start a new life, Jordan and Bradley "Brad" Charles Vane IV - running the family empire, the chain of HomeMakers. But the quest for Dana involves more than just solving it. She has to work out her past with Jordan - even if it means she has to get punched in her heart all over again.

Nora Roberts has mastered with her pen and imagination again. Who would have dreamed of such a mythical tale - although it may have some root somewhere in some religion or race. The whole plot was so real for me that I almost imagined the paintings to be live, the characters to be real as well. Powerful writing, strong characters, willed opponent and equally beautiful web running thru all of them. I have to say though, there is a lot of literature in between that could have cut down a bit, but that didn’t the hurt the book much. I recommend you to pick this book and read it to enjoy as much as I enjoyed it.

Spoiler Alerts:
1) Rowena and Pitte are shown as the Teacher and Guardian of the demi-goddesses who are now asleep for eternity - Story commonly called as the Daughters of Glass.
2) Dana and Jordan also come across the stunning buck with sapphire blue eyes that remind one of Pitte's blue eyes.
3) Loved the name of the business the three (Malory, Dana and Zoe) plan to start together - Indulgence - a culmination of Art (an art gallery patronizing the local artistes), Knowledge (a book store with a tea room) and Beauty (Salon with full body services). It made me want to go to such a place immediately.
4) In one of the scene Nora Roberts mentions a young boy reading a copy of Where the Wild Things Are in this book. And the movie released based on the book the kid was reading 6 years later.
5) Nora Roberts had previously used a similar concept in one of her series - Three Sisters Island Trilogy (Go here for my review of the books) - where the boy left the girl, and her best friend (another girl) also left her. In this case the boy left the girl and his best friend who is a boy. With so many books one writes it is perhaps bound to have some of the concepts cross-over.
Tags: books, critique by amateur, key trilogy, reviews
Subscribe