Key of Light is the first in the Key Trilogy written by Nora Roberts and published in October of 2003. The plot primarily revolves around Malory Price - manager The Gallery and also has a keen eye for beauty - and Michael "Flynn" Hennessy - owns and runs the local newspaper - yet brings in the other four players along with the quest for the key. 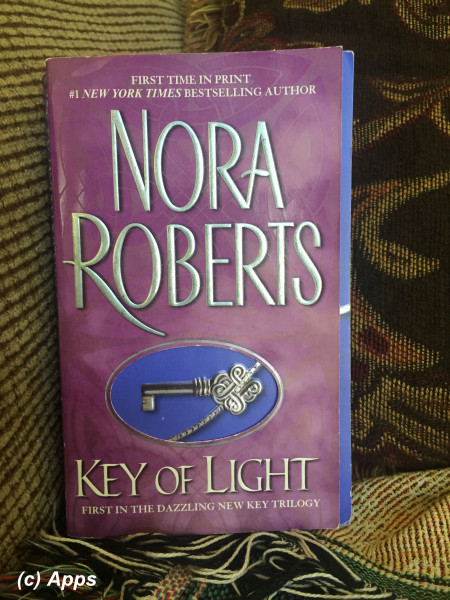 Key Trilogy revolves around a mythical story of three demi-goddesses whose souls are trapped in a glass box. The only way the box can be opened is by three keys found by three strong and independent women - each with their inner strength of light, knowledge and valor. The book follows the typical Nora Roberts formula where the first part - introduces all the characters and a quest for them to work on while highlighting one pair - second part - the quest is analyzed and prepared for while highlighting the second pair - and third part - the showdown of the quest typically facing the enemy while highlighting the last pair. What is different in this series from the formula is that each woman has her own quest, has to analyze and prepare and also a showdown with the enemy albeit using the help of the remaining five. That perhaps sets this series apart from other Nora's books.

Malory Price, Dana Steele - local librarian and a fount of information - and Zoe McCourt - hairdresser and single mom who moved to Pleasant Valley, PA to start a new life - are sent invitations to Warrior Peak, a castle like estate outside of the town. Everyone gets the same message in the invite:

The pleasure of your company is desired for cocktails and conversation. Eight P.M., September 4. Warrior's Peak. You are the key. The lock awaits.

Little did they know this would be most adventurous and at the same time a bit scary cocktail when they accepted the invites. Wondering why the three different women from different lifestyle and careers had anything in common that they were invited in the first place - other than that they all live in the Valley below, are between 26 - 28 years old and are in a tight spot in their careers. The hosts Liam Pitte and Rowena O'Meara give them a mythical legend - about a God-King who lived behind the Curtain of Dreams and Curtain of Power in a land of great mountains and rich forests, who fell in love with a mortal, his parents allowed the mortal woman to be married to him and brought her behind the Curtain of Power into their world thus breaking the essential rule, causing restless in their world, the God-King and his wife bore three demi-goddesses with mortal soul, given three jeweled amulets, growing up to fine young women and how their souls were locked in a box by one evil demi-god who coveted what they had and he couldn't have leaving them in an eternal sleep. No key or no power could find it or unlock the box - except for three mortal women who would come together, find the keys and unlock the souls

Pitte and Rowena just told them that they were the three women and that they are tasked to find the key, but it is not free of course. They each gets 28 days (one phase of the moon), a clue to follow and $25,000 for just trying the quest. If they succeed or fail they get to keep the money. But if they fail, one year of their life is taken away - which year would that be is unknown. And after the first finds the key, the second's time starts and so on. If all the keys are found in the end each would receive One million dollars.

The first quest picked is by Malory and her quest is to seek honor, truth and courage and find the key of light. Signing the contracts and accepting the money all three women dazed and confused go on their despite their apprehensions. And the quest begins. She has the help of the clue and her newly found friends - Dana and Zoe. Apart from them the three handsome males also come to their help in their own way - even though the women initially don’t like them - Flynn Hennessy (Dana's step-brother), Jordan Hawkes (famed writer and one-time boyfriend of Dana) and Bradley "Brad" Charles Vane IV (running the family empire, the chain of HomeMakers) - all three being friends since kids. Warrior Peak has special place for all the men characters involved in the plot too, one way or the other inserting itself in their lives.

The quest continues where Malory with aid of her friends, unravels the clues, faces the evil that had been haunting the three demi-goddesses and eventually gets the key. And brings in all the six together at one place in the end. At the same time she tries to solve the puzzle called Flynn who although looks affable is anything but. She also figures out her professional challenges by binding with her two new friends to open new doors.

Nora Roberts has mastered with her pen and imagination again. Who would have dreamed of such a mythical tale - although it may have some root somewhere in some religion or race. The whole plot was so real for me that I almost imagined the paintings to be live, the characters to be real as well. Powerful writing, strong characters, willed opponent and equally beautiful web running thru all of them. I have to say though, there is a lot of literature in between that could have cut down a bit, but that didn’t the hurt the book much. I recommend you to pick this book and read it to enjoy as much as I enjoyed it.

Spoiler Alerts:
1) When Malory drives up the Warrior Peak to the castle she comes across a stunning buck with sapphire blue eyes. A sign that clearly gives us a guess that Malory would be the first one to go on the quest.
2) Pitte's blue eyes certainly reminds you of the buck that Malory saw on her first night at Warrior's Peak.
3) Rowena and Pitte are shown as the Teacher and Guardian of the demi-goddesses who are now asleep for eternity - Story commonly called as the Daughters of Glass.
4) Just knowing each other for three weeks, Malory and Flynn decide to marry. It may not be an American concept but for Indians who get married through Arranged Marriage process, most of the time the girl and guy don’t get to talk to each other until their wedding is completed. So it was not so much surprising for me as opposed to a few of my non-Indian friends who found this concept not to their liking and refused to continue to read the series. Pity, they missed the best series.
5) Loved the name of the business the three (Malory, Dana and Zoe) plan to start together - Indulgence - a culmination of Art (an art gallery patronizing the local artistes), Knowledge (a book store with a tea room) and Beauty (Salon with full body services). It made me want to go to such a place immediately.
Tags: books, critique by amateur, key trilogy, reviews
Subscribe