Stars: 5 / 5
Recommendation: A healthy rivalry in-person turns to a beautiful romance through a few words on paper even though you know the person well only though those few words.

When I was writing the review for the 1998 American film You've Got Mail (My review here.), I came across one tidbit that although this was a remake of the 1937 play "Illatszertár" (in English, titled "Parfumerie") by the Hungarian writer Miklós László, the first film adaptation was this 1940 American romantic comedy The Shop Around the Corner.  I had promised in that post that I would be doing a review of this 1940 movie as well. So, here it is. Don’t miss watching the trailer below, it is really really cute. Check out the opening scene of the movie with a write-up like in a book. Alfred Kralik (portrayed by James Stewart) is the top salesman at a leather goods shop Matuschek amd Company, in Budapest owned by the high-strung Mr. Hugo Matuschek (portrayed by Frank Morgan). Klara Novak (portrayed by Margaret Sullivan) comes into the shop looking for a job and ends up selling a cigarette box - the very one that Alfred was against having it in the shop and causing conflict between Alfred and Matuschek - that prompts Matuschek to hire Klara. Eventually Krala slowly increases her sales and becomes a strong threat for Alfred's position as a top salesman resulting in them becoming rivals at work.

Little do they know that they both have been corresponding via letters as pen pals and have actually fallen for each other. Finally they plan to meet - Klara will be at Café Nizza with a red carnation and Tolstoy's book Anna Karenina while Alfred will be there with a blue carnation. However when he reaches there he finds Klara to be his mysterious friend. And the story continues in the very similar plot as You've Got Mail - where Alfred disrupts Klara's appointment as Alfred rather than mysterious friend, then develops friendship and finally reveals to her who he really was. A sub-plot with regards to Matuschek follows along that slides seemlessly with the main plot.

I have loved this movie as much as I have loved the Tom Hanks - Meg Ryan movie. It's so lovely to see that You've Got Mail has used so many scenes that are exact copy to this movie certainly making that movie a homage to this movie. The whole movie has been done in two sets and that is incredible. Simple characters, straight plot and yet capturing you to the core. It's rarely available online to watch free so if you get a chance don’t miss it and enjoy how two lovely people turn from rival to friends to mates. 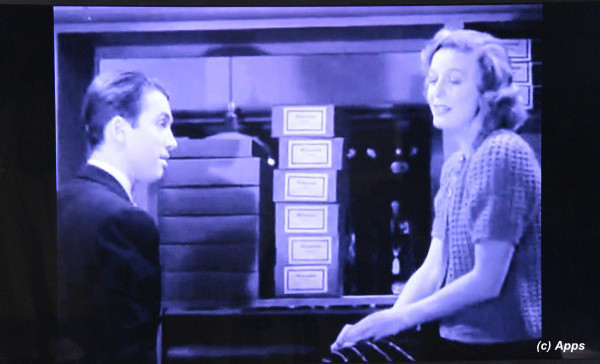 1) Interestingly enough the name of the book store that Kathleen Kelly owns, in You've Got Mail movie is named "The Shop Around the Corner" - as a homage to this predecessor movie.
2) According to Wiki: The Shop Around the Corner is ranked #28 on AFI's 100 Years... 100 Passions, and is listed in Time's All-Time 100 Movies.[4] In 1999, the film was selected for preservation in the United States National Film Registry by the Library of Congress as being "culturally, historically, or aesthetically significant.
3) Notice that every time Matuschek asks for anyone's opinion on any item stressing specially "I want your opnion. Your honest opinion. That's all I want", his friend Pirovitch (portrayed by Felix Bressart) - a kindly family man - always escapes from the scene. Very funny!!
4) This is the third movie of James Stewart that I have watched and reviewed on - Rear Window (Link for my review here), The Philadelphia Story (Link for my review here).
5) In the opening credits, Miklós László is written as Nikolaus Laszlo.