Killer In The Kitchen is the 43rd installment in the series that Donald Bain had written based off of the Universal Television Series Murder, She Wrote and was published in April of 2015. The plot is set in our very own Cabot Cove, where Jessica Fletcher resides. And of course there would be a murder. :) 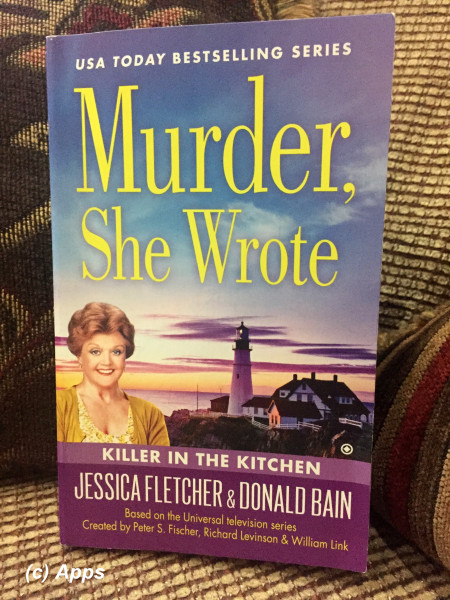 Jessica Fletcher's good friend Isabel Fowler's son Bradley Fowler and his wife Marcie Fowler are opening up a new seafood restaurant called Fin and Claw in Cabot Cove by the docks. Despite the rough and short-tempered nature of Brad, they manage to complete the construction and open the restaurant as planned - although Isabel ends up taking a personal loan and also remortgage her home for helping Brad and Marcie financially. Now Gerard Leboeuf, famed French Chef with a suite of restaurants under his banner, also decides to open a French Bistro right opposite to where Fin and Claw is opening.

Tensions rise between Leboeuf and the Fowlers when Leboeuf tries to capture the market and gradually close doors for Fowlers. Despite that the Fowlers have their grand opening and Gerard Leboeuf comes with an entourage to the restaurant - his wife Eva, his son Wylie, manager of his new restaurants Chef Walter Chang, and two other folks who looked like bodyguards. Leboeuf and his entourage were not particularly nice to the Fowlers or their staff or the food that was served - infact they were quite loud with their unwise and wrong comments as well as obnoxious. And one such comment hurts Isabel so much that she suffers a stroke and loses her life that night. Brad's animosity and vehemence increases further more.

A week after the Fowlers had their restaurant open, Leboeuf opened his restaurant with taking up everyone's tab for that night. The event was in much more extravagant way than what the Fowlers did. Leboeuf didn’t pull any stops to make his event grander than anything every happened in Cabot Cove. All was thought it ended well until Jessica receives an early morning call that Gerard Leboeuf is murdered with a knife in his chest in his new kitchen at the French Bistro. Sheriff Mort Metzger and his deputies take over the scene immediately. However by afternoon two detectives - Detective Clifford Mason and Detective Anne Lucas - from the Major Crimes Unit from the Attorney General's Homicide Unit also get involved in the investigation, considering the high-profile that Gerard Leboeuf warranted. And their investigation is zoning in on the obvious suspect - Brad Fowler - just because of the animosity between them and the vehemence that Brad had publicly shown towards Leboeuf.

But Jessica doesn’t believe that despite the volcanic temper of Brad, he could never be a killer. And to help the spirit of Isabel Fowler calm down, she inserts herself into the investigation - much to the chagrin of Mort and the Detectives. She has her own set of questions that she is looking to get answers which will perhaps put the spot light on others who have a better motive than Brad Fowler. As always her investigation leads into the dark past of Leboeuf, his ties with drugs and underground and other unsavory stuff that eventually gets the real killer out.

A medium complex plot that did keep you interested enough to continue. More than often the books in this series, I could guess on who the killer would be, but in this case I couldn’t point till the last minute - well when Jessica was about to reveal. That in itself intrigues me in a book. However the story is written in the form of three parts although the story flew thru the parts seamlessly. Didn’t understand why the story was put in the form of three parts - perhaps to divide it into Murder, Investigation and Result. However, I wonder what was the author's thought. I remember reading a few books of other authors who had a similar tendency for some of their books. Some books made sense and some didn’t just like this one

All in all another cozy mystery - easy on the brain and simple at heart. Pick it up for that smooth ride you want in a book.
Tags: books, critique by amateur, murder she wrote, reviews
Subscribe