Stars: 2.5 / 5
Recommendation: Definitely a pick if you like fantasy fiction involving vampires, archangels, angels and humans. However the story becomes predictable in this installment as it moves.

Archangel's Storm is the fifth installment in the Guild Hunter series by Nalini Singh and was published in September of 2012. The plot revolves around Jason - one of The Seven to Archangel Raphael, best spymaster and about 700 years old - and Princess Mahiya - Archangel of India Neha's niece and ward. Most of the story also takes place in India in the Archangel Fort - Neha's fort. 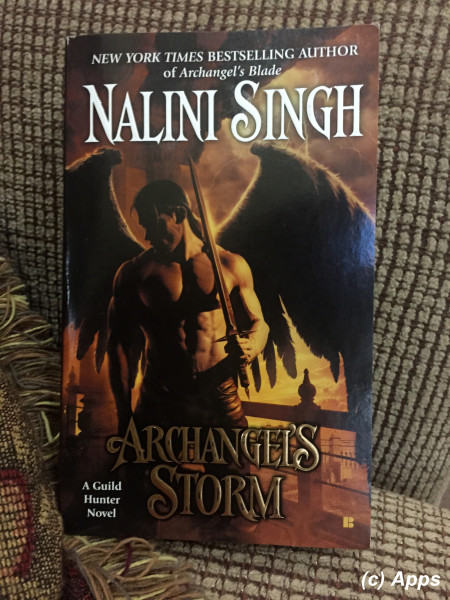 The stories in this series are set in a world where it is ruled by Archangels with Vampires, Angels and Humans with extra-ordinary powers as their team serving them. The Cadre that is the council of Archangels seats 10 powerful archangels who share the world in ten different continents and rule them, hold sway over the immortals and mortals alike. Archangels are immortals who have lived thousands and thousands of centuries. Angels are born or made but have lived centuries. Vampires are almost-immortals and are Made mostly and some have lived as long as the Archangels. They serve the Archangels and have contracts with their angelic masters that they have to live by. They use humans as cattle for feeding on blood. Guild Hunters are humans with special powers who are tasked to capture Vampires who have gone rogue. They have psychic and physical powers which are extra-ordinaire. The plots primarily revolve around Archangel Raphael, his consort, his Seven and his people while he is ruling North America from The Tower in Manhattan, New York.

Archangel Neha's consort Eris is murdered and Neha is mad with rage, grief and vengeance.  Neha being not only an Archangel but also the Queen of Snakes and also Queen of Poisons, Raphael worries what she might do in her rage. He didn’t want her become another Uram - Archangel of Russia who had gone on a killing rampage following his lover Archangel Michaela -  especially as this is happening on the heels of her daughter Anoushka executed - by Raphael and Elena. Raphael offers his spy master Jason as help to Neha in uncovering the murderer. But Neha insists that he bound by a blood vow to her niece Princess Mahiya. To avoid another rampage Jason agrees to the blood vow with conditions of his own and enters into the fort of Neha.

Princess Mahiya is a 300 years old angel, illegitimate daughter of Eris - consort to Neha - and Nivriti - twin sister to Neha. Neha had never forgiven Eris or Nivriti for the betrayal. She had chained Nivrti somewhere and after giving birth to Mahiya she had killed Nivriti. As for Eris she had put him under captive and tortured him in as many ways as she could at the same time keeping him alive and in health. She also took out her anger on Princess Mahiya once she had become and adult in angel-terms and returned to the Archangel Fort - beaten , humiliated, spanked, slapped, and to extent of crushing her heart as much she could. Mahiya survived all that with her faith that one day she would escape and be free. And now she is bound to Jason - an angel of shadows and darkness - through blood vow. Perhaps he would be her door or window of escape if she played her cards right while she is tied to him for the period of the investigation.

Jason with help of Mahiya investigate the murder of Eris and find enough clues that point to Neha herself. But then three more murders occur - first Audrey, a Vampire who was bedding Eris prior to his death; second Shabnam, who was the longest-serving ladies-in-waiting for Neha and finally of Arav who had played with her heart and broken her like a toy. These change his course of investigation and also forces Neha to give him complete access and full reign of her courtiers and confidantes that goes beyond the blood vow. Who has started this killing rampage? Was Neha the ultimate target? Why kill Eris after so long a time? Is Archangel of China, Lijuan, have a part in these killings? Has her power risen or new abilities seen since Caliane has risen? Was Neha playing a game with Jason and Raphael by committing these murders herself? While Jason unraveled this mystery his heart without his knowledge bent on unraveling the mystery called Princess Mahiya. And well, Mahiya herself couldn’t keep herself from falling for his charm. Will they both understand each other and find themselves in the end?

Nalini Singh has well spun again her web around the Archangels, Angels and Vampires. However although the characterization of Jason and Mahiya has been powerful and impacting, the plot in itself was weak. It made me wonder if Nalini Singh had written this book just so she could find a mate for Jason. As the story progressed, it was clear as to who had been doing the killings and who they were going after. I didn’t need to read the end but had to so I could confirm my guess. I would have loved a few more twist and sudden turns. Despite that I still recommend you to read this book just to understand Jason and Mahiya more and enjoy their life.

1. A sub-plot involving Dmitri - second-in command to Raphael and a 1000 year old vampire - and Honor St. Nicholas - A Guild Hunter and mate to Raphael, was his wife Ingrede in her past birth before Dmitri was Made a Vampire - continues in the book. It covers showing Honor being converted to a Vampire with help of Dmitri.
2. A sub-plot involving Ashwini Taj - a Guild Hunter - and Janvier - smooth talking Cajun Vampire of 245 years old and works closely with Ashwini - continues who have been constantly playing the game of love without falling for each other. Yet!
3. Book also follows Caliane - Ancient Archangel once ruled Sumeria - who is settling somewhere in the wilderness of Japan with her city Amanat after waking from her Sleep
4. Caliane's rise has caused not only chaos in weather but influence the power change amongst the Cadre. It is also rumored that the Archangels have been showing newer abilities and no one knows the extent of them or what harm it would do to them as well as the World.
5. I am curious to see how Nalini Singh will evolve Mahiya since she left with an open-ended statement that no body knows how much powers are enhanced.
6. I am also curious to see what are the new powers all the Archangels acquiring as a result of the Ancient rising from here sleep.
Tags: books, critique by amateur, guild hunter, reviews
Subscribe