Continuing with the critiques I started in 2015, here is the next in series – a movie review.

Recommendation: Definitely to get you out of those dull days, charm you into a laugh on those lazy days or make you sidesplitting with tears.

Happy Birthday Suren!! My brother had his milestone birthday this year and it fell on this day of the post. Andaz Apna Apna is one of his favorite movies. Here's the review on that movie for his birthday.

Andaz Apna Apna ( = Everyone Has Their Own Style) is a 1994 Indian (Hindi) comedy film. It was an average run at the time the movie was released, even though there were big names involved - Aamir Khan and Salman Khan. However since then it has become a cult classic now with the movie quotes becoming day to day life quotes. Perhaps its timing comedy or the connection between the four lead actors or the silly plot - but it has not captured everyone's heart giving everyone a crazy ride. Here is my take on it. A silly plot where two good-for-nothing lazy bums - Amar (portrayed by Aamir Khan) and Prem (portrayed by Salman Khan) - embark on a journey to woo the rich heiress Raveena Bajaj, daughter of Ram Gopal Bajaj aka Uncle (portrayed by Paresh Rawal).  Raveena is in India along with her assistant Karishma looking for a husband. In the meanwhile Uncle's twin brother Shyam Gopal Bajaj aka Teja had been looking at taking his revenge on his brother for a long time. He gets his two goons Bhalla (portrayed by Shehzad Khan) and Robert aka Raabert (portrayed by Viju Khote) installed in the house to have them kill Raveena. Amar and Prem also get themselves installed - one as an amnesiac Tilu and another as Dr. Prem Khurana come in to treat Tilu. In the process Raveena falls for Amar and Karishma falls for Prem. And here comes the twist - Raveena who calls herself is actually her assistant Karishma and Karishma who acts as her assistant is infact the real heiress Raveena. They exchange their places so they get the right groom for the heriess. And to add to the confusion the Uncle and Teja help making everyone crazier. Added to all this confusion is another crazy goon Crime Master Gogo (portrayed by Shakti Kapoor) from whom Teja had taken a lot of money and who is bent on getting his money back. Thus the plot continues with the confusion between Raveena and Karishma, the attempts that Bhalla and Raabert try to kill the heiress, unknowingly Amar and Prem foiling those plans, the confusion of Uncle vs Teja, Crime Master Gogo's comic relief and finally outsmarting Teja and Uncle too to win the the girls.

The chemistry between the entire star cast was impeccable which perhaps was the key for the movie to become a cult now despite the average run in the beginning. This is the only movie that these two big stars - Aamir Khan and Salman Khaan - had worked together. Aamir Khan's role showing male chauvinistic charisma with a hint of craziness, Salman Khan's role projecting idiocy with a soft heart, Raveena's role having protective nature over Karishma and Karishma's role coming with utter innocence all meld well. Raveena was just making her mark as a star and this movie led her to Mohra which marked her as the Mast Mast Girl truly leaving a stamp and she never looked back. Karishma was also an up and coming star and yet to become the girl in Raja Hindustani and mark her way. However this role didn’t hurt at all. 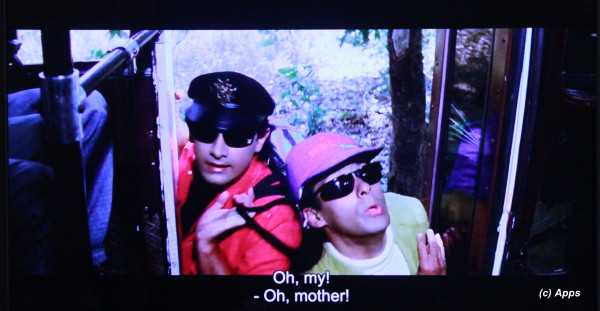 Paresh Rawal - another upcoming artiste - may not have had memorable roles prior to this movie, but his double role as Teja and Uncle has made a stamp like a star on the Hollywood walk of fame. Despite so much comedy in the movie, who can forget Crime Master Gogo and his witty remarks. As the nephew of famous villian Mogambo, Shakti Kapoor portrays the role of Crime Master Gogo and has less screen space. Yet he becomes the pivotal role in the movie - as the most lovable villian, even gracing him a spot in the final scene. I don’t think anyone else would have made this role immortal. Teja and Bhalla complement each other similar to Daga and Teja in the hit classic movie Mr. India. The confusion of names with reference to real names of Raveena Tandon and Karisma Kapoor perhaps was the most brilliant idea by the director or the writer. 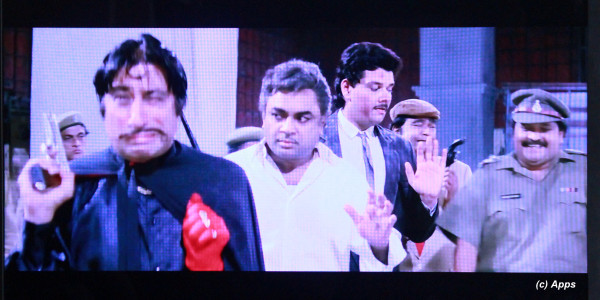 The music had been fun and charming, easy to croon along and at the same enjoy them thoroughly. Here are all the songs:

One of the song "Ello ji Sanam Hum Aa Gaye" is based on the song  Banda Parwar Thaam Lo Jigar from the 1963 hit classic Phir Wohi Dil Laaya Hoon ( = I've Come Back With the Same Heart). I had mentioned about it a while ago in one my blog posts here.

Here are few iconic quotes that are still used in daily life:

Such a silly movie with dialogues that don’t make any sense but are part of our daily life now. Rajkumar Santoshi gave us a legacy to remember by in the name of comedy, silliness and pure fun. I recommend that go watch it on You Tube or Netflix or pop in that DVD you might have stowed away to enjoy the fun and laugh out loud or rolling on the floor.

1) I have never watched a movie before that had so many colors in its opening credits. Also check the spellings of the actors, everything is spelt with additional letters in their names. 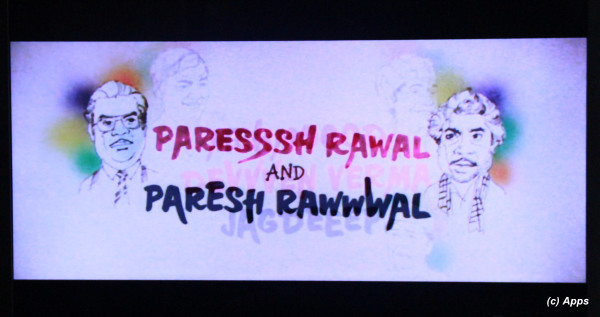 2) Also note the name of Shakti Kapoor. The comic villian Crime Master Gogo in the movie portrayed by Shakti Kapoor. His name is spelt as Thanki Kapoor, the initial "S" replaced with "T". Shakti Kapoor's character always replaces T with S. The credits showing this is a tribute to his acting. 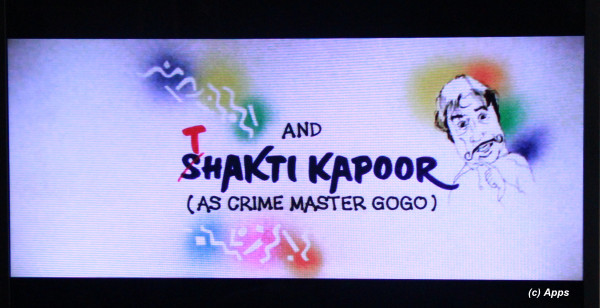 3) Govinda and Juhi Chawla appear as guest stars as themselves in the movie - Juhi and Govinda in a dream sequence of Aamir. The pure filmy dialogues by Juhi and Govinda makes you laugh with all your 32 teeth seen. Scene refers to quite a few of Juhi's movies and her co-stars. 4) The film had little to no publicizing as the release date was given but the movie was unsure to be completed.

5) With four big named actors (of course big now) the movie made an average run at the box office when it was actually running. It's fame came after it was released on VCRs and DVDs.

6) There are several references to Aamir's and Salman's previous works in the movie. When Aamir Khan is inaugurating the prison by cutting a ribbon, in the background the song 'Papa kehte hain' from his 1988 hit film Qayamat Se Qayamat Tak ( = From Doom to Doom) can be heard. Aamir and Salman sings the song "Dekha hai pehli baar saajan ki aankhon mein pyaar" from Salman's 1991 hit film Saajan ( = Beloved). 7) Dilip Kumar's 1967 classic Ram Aur Shyam ( =Ram And Shyam) and Hema Malini's 1972 classic hit Seeta Aur Geeta are referenced in the movie given the fact that Paresh Rawal does twin roles of Uncle and Teja.

8) Salman Khan had been named Prem for several of his roles in the movies in 1990s.