For review of all Perry Mason books: Go here

Recommendation: For everyone who have fetish for courtroom drama, this is the lawyer's case files that one would definitely have to read.

Perry Mason in The Case of The Blonde Bonanza is the 67th installment in the Perry Mason series by Erle Stanley Gardner first published I 1962.. The name surmises what the plot would be about - indeed its about a blonde and a bonanza. 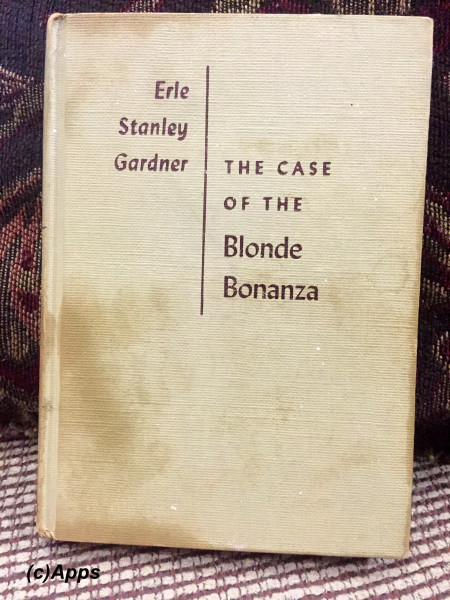 Vacationing at Bolero Beach with her Aunt Mae, Della Street gets obsessed watching a young model-shaped woman eating to put on weight. She suspects some kind of conspiracy and calls in Perry Mason asking him to come by. Upon reaching there Mason comes to know that the girl, Dianne Alder, had signed a contract with some kind of with Harrison T. Boring at Hollywood Talent Scout Modeling Agency for a clothing designer who was coming up with a line of clothing for women with firm and fleshy bodies.

Mason takes a look at her contract and immediately suspects that there is a lot fishy in the contract. Thus he retains Dianne as his client and starts his investigation of the contract and beyond. That leads him to Missing Heirs and Lost Estates, a missing / long-dead father, a murder and finally a court case to defend Dianne Alder. There is less of courtroom drama in the book and more of investigation. Nonetheless a very intriguing case that has a twist every bend and an unexpected course at every turn.

A few interesting things I noted:
1) Several quotes in the book makes one wonder if Perry Mason and Della Street were indeed romantically involved as well. For instance, Aunt Mae comments "Come on now, you two. You're either talking business or making love."
2) Sid Nye and Moose Dillard are two operatives of Paul Drake that are seen in this book extensively than Paul Drake, helping Mason out on the case.
3) The District Attorney in this case is Carter Leland as opposed to Hamilton Burger - a constant in most of the cases - only because the case was put in front of Riverside County Magistrate. However in the TV episode the DA was still Hamilton Burger.
4) Also in the TV Series it was Paul Drake and Dillard being the primary detectives for Perry Mason.

Here is the TV Series (although the voices are distorted)