For review of all books under Murder, She Wrote series: Go here.

Recommendation: If you want an easy and quick murder mystery pick it up and you will enjoy it.

Murder At The PowderHorn Ranch is the 12th installment in the series that Donald Bain had written based off of the Universal Television Series Murder, She Wrote and published in May of 1999. The plot is set in Colorado on a ranch and ofcourse where there's Jessica there's bound to be a murder or two. :) 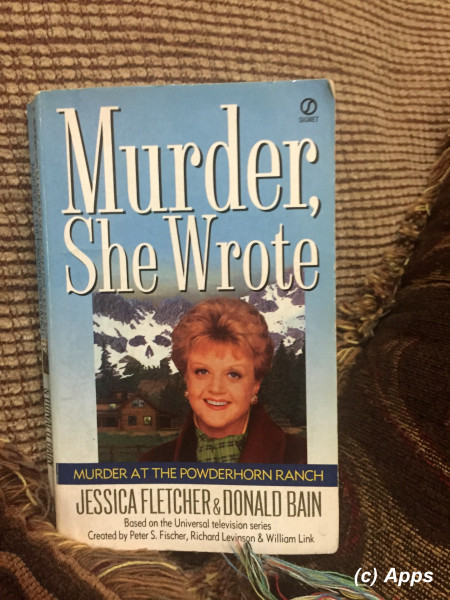 Jessica Fletcher and Dr. Seth Hazzlitt take up an offer from their long-time friends Jim and Bonnie Cook to spend a relaxing weekend at their ranch in Powderhorn Valley in Colorado. She wanted to get away for a break anyways. Other folks who were at the ranch the same week were the Morrison Family staying - Evelyn Morrison (the family matriarch), Craig Morrison (her older son), his wife Veronica Morrison, their kids Pauline Morrison and Godfrey Morrison, Chris Morrison (the younger song of Evelyn), his wife Marisa Morrison, Cousin Willy (unmarried cousin) and Robert Morrison (Evelyn's brother). There was a last minute addition, a couple on a driving tour of the Rocky Mountain - Paul Molloy and Geraldine Molloy. The Morrisons expressed displeasure about having another couple on the ranch but went on with everyone.

Following day on a return trip from their riding, one of the wranglers Crystal finds the dead body of Paul Molloy. Everyone is shocked and upset about a murder happening so close and assume it to be a drifter who had killed Paul. Jessica however has her own assumptions is confident that someone at the ranch could have had an opportunity to kill Paul. But what was the motive? Nobody seemed to know the couple. With Homicide Investigator Robert Pitura and Sherriff Murdie on the scene, Jessica offers her full support, theories and helps in investigating along - as always. While they are searching for a motive, who and how someone killed Paul, Geraldine goes missing and only to be found dead the following day.

Many questions keep coming back to Jessica's mind. Who would have killed both Paul and Geraldine? Was it one person or two? What was the motive? Was there a link between the Molloys and Morrisons? As the plot thickens so does the suspects and reasons. Read through to see how Jessica pushes through like a bull and aids the Sherriff and Investigator in solving the murder.

Like many of these books, I could gander a guess on who the killer was around 3/4th into the book. But what and how was something that I could find only at the end. Another easy murder mystery with no hidden surprises but medium twists that will leave you happy at the end.